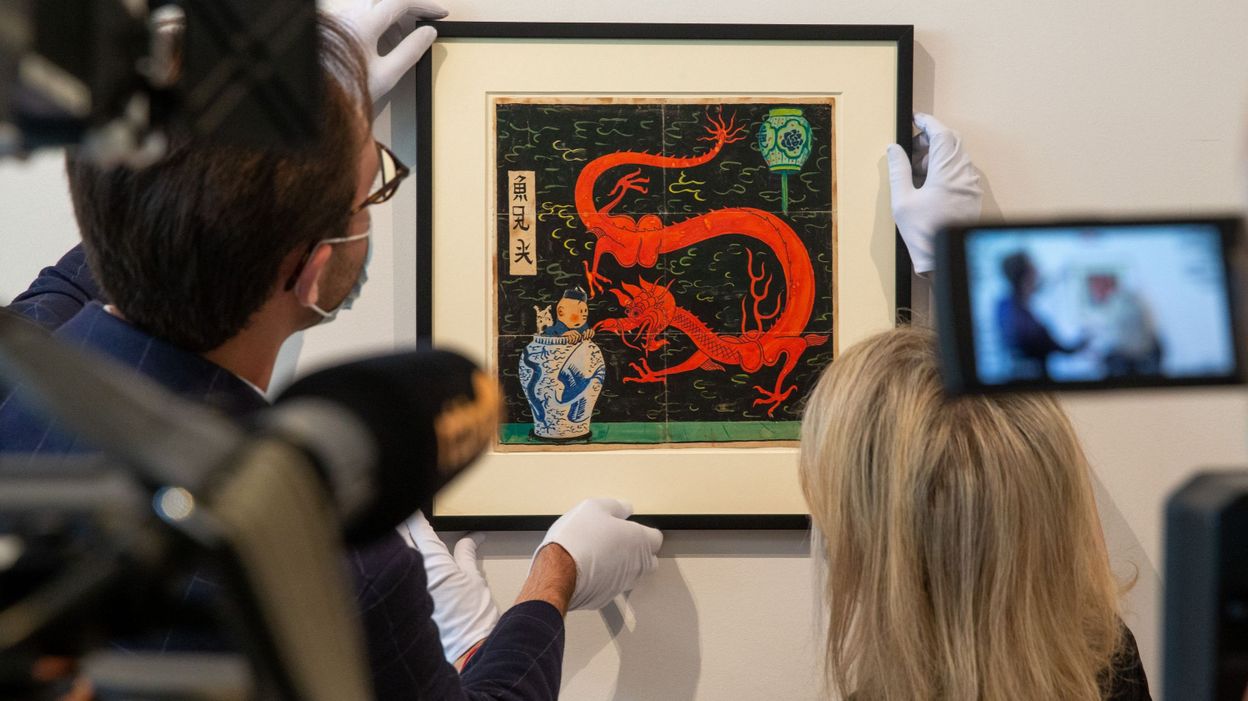 An unprecedented cover of Tintin at auction: the incredible story behind this masterpiece estimated at 3M € – © NICOLAS MAETERLINCK – BELGA

And to think that it was good to throw away. We are in 1936 when Hergé made this gouache, which he imagines to be the future cover of the fifth album of the adventures of Tintin, “Tintin and the Blue Lotus“, where the young reporter with the powder puff aims to dismantle international opium trafficking in a country he knows nothing about, China. A gouache cover, entirely in color.”When you see Tintin’s gaze and that of the dragon, you have the impression that time stands still. It’s so intense“, is still ecstatic, even after months during which he analyzed it from all these angles, Eric Leroy, comic strip expert at Artcurial, a famous French auction house.

1936 therefore, and Hergé is not a little proud of the result, especially since the Blue Lotus is for him a sort of “number zero” in the adventures of Tintin: for the first time, the author knows ‘suddenly the beginning and the end of the story, builds a solid storyline from A to Z, and then he makes Chang – one of the only real characters to be integrated into the adventures of the young reporter – his friend, a meeting that will mark him for life.

But now, the Casterman editions (historical publisher of the Adventures of Tintin) will refuse this drawing. Reason: its mass printing would be too expensive! Indeed, the intense colors would have been too expensive to publish them in four-color process, a printing process in four colors (black, blue, red, yellow). “However, Tintin’s albums in the 1930s were already very expensive to buy and Casterman editions did not want to increase the price yet.“, specifies our expert. Hergé will then redo the work, simplified, in line, in India ink, before marking his color indications on a layer, which will finally give the version below to the right of the box.

For 45 years in a drawer, folded in six

But Hergé doesn’t throw it in the trash, no. He offered it to a little boy of seven, Jean-Paul, made him the son of Louis Casterman, director of the editions of the same name. “Then he carefully folds it in six before sliding it into a drawer. Obviously at the time it had no value“, laughs Eric Leroy.”This quite touching gesture is an integral part of the history of this drawing“, he continues.

Since then, this drawing was therefore in the hands of the Casterman family (Jean-Paul Casterman having died in 2009). Jean-Paul Casterman took it out again in 1981 so that Hergé could sign it, while he found his friend Tchang Tchong-Jen during a reunion that was widely publicized.

The gouache is exhibited to the public for the first and only time (until today, see Infra) in 1991 in Ixelles, on request from the Hergé Foundation, which had it on loan. “It is probably one of the most emblematic images in comics and it is extremely rare since Hergé only made five color covers for Tintin. And then, I would say that it is a special and particular work because it is no longer really a cartoon drawing, it is something that is out of time and out of this environment. That is to say, it could very well fit into a contemporary art collector. The mystery of this gouache is very strong“supports our expert before declaring, categorically, that it is”probably one of the most beautiful pieces, if not the most beautiful, to exist on the private market.“

Estimated between 2 and 3 million euros

One thing seems certain, it will interest far more than comic book lovers. “One can think of a contemporary art collector in New York, an art lover in Asia, a museum in Beijing… It is a drawing that will arouse the interest not only of comic book collectors, but well beyond. . I think that a modern art collector will be subjugated, since we are in the 1930s, we can feel the influence of Russian constructivism with these completely astonishing flat colors, in particular“, analyzes Vinciane de Traux, director of Artcurial Belgium. And Eric Leroy abounds:”This work is so emblematic that it could be bought by someone who has absolutely no work of Hergé but who would think that with this one he would have the “ Grail ”, there is no need to have something else.“

This probably explains the estimate made between 2 and 3 million euros. So far, the record for a work by Hergé is 2.6 million euros, when, in 2014, the cover pages were sold by Artcurial. The previous sale of a gouache blanket took place in 2012: that of Tintin in America was auctioned at 1.3 million euros. But the stakes could go up even more for this gouache since it has dimensions of 34cmx34cm, larger than the usual 21cmx21cm.

While waiting for the auction at Artcurial in Paris on November 21, this exceptional cover is visible from September 22 to October 2 at the Brussels headquarters of Artcurial, avenue Franklin Roosevelt.