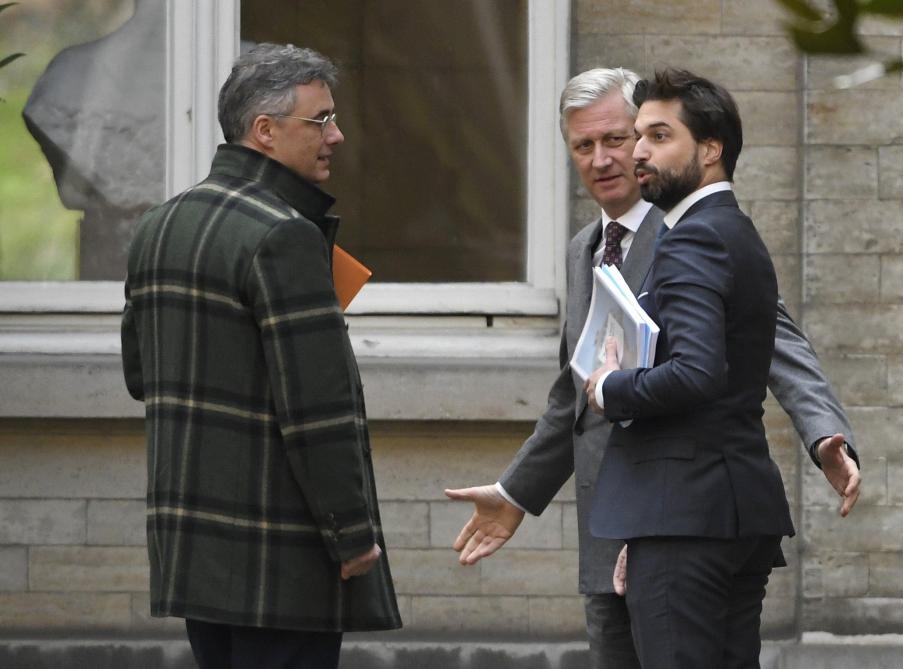 The duo Georges-Louis Bouchez Joachim Coens has been extended by one week. Several editorialists are again raising the possibility of new elections.

TheThe mission of informants Georges-Louis Bouchez and Joachim Coens is extended until next February 4, said the Royal Palace on Tuesday evening after four hours of audience. Leaving the palace, the president of the MR Georges-Louis Bouchez commented that “there are solutions but there is still a long way to go” he added.

Our daily The evening said the informants had to convince the King of the usefulness of extending their work. And this for final checks. The duo of informers has indeed written a 30-page briefing note that they want to test with the parties – the N-VA is still in the running.

Will Georges Louis Bouchez and Joachim Coens manage to overcome in eight days the difficulties they have not been able to overcome since December 10 ?, wonders The future in his editorial. “The street is booming but the informants do not seem affected by the union anger”.

“It is above all, now, a matter of feeling, pride, vanity to take into account. Henceforth, in Wallonia as in Flanders, no party president can be repudiated in his choices a thousand times repeated. The obstinacy trap has closed in on each political family, prohibiting any concessions and reducing the room for maneuver to nothing. And that mental obstacle is more difficult to overcome than a mathematical equation. “

And The future to conclude, “by extending the informants by a week, the King has undoubtedly succeeded in repelling the risk of a mission entrusted to Bart De Wever. But, eight months after the election, failure remains the number one option. Yawning … “.

In the group’s newspapers Sudinfo, the editorialist Benoît Jacquemart explains “that a month and a half later, we don’t seem much more advanced, except on one point: N-VA and PS together in a federal government, it is absolutely impossible”. For the columnist, “we obviously can not presume” final conclusions “(the last, we hope) of the two informants but our crystal ball tells us that a coalition with PS and N-VA would be” ultimately impossible “. More than a week of suspense. “

The Gazet Van Antwerpen believes that “the chances of new elections are becoming more and more real”. “No one will dare take the risk of going one more millimeter outing. And the mutual distrust is already big enough. Add to that the political contradictions, personal ambitions and hidden intentions and you get the perfect dead end. “

For the Flemish daily, “the chances of a coalition without N-VA also remain microscopic, due to internal divisions between the liberals and because the CD&V has trouble suddenly changing course. A success was indeed obtained on the Flemish side: the N-VA avoided the black spot with a lot of patience and cunning. Monday was Magnette who buried the purple-yellow on the ground, the N-VA never gave the other Flemish parties an alibi to continue without it. This political dexterity does not work for the moment, but could eventually bring a Confederate country closer. Has this been the intention for all this time? We can not blame the N-VA for playing on two boards at the same time in a situation where the PS is the only must. “

See Also:  Everyone wants to be Syrians on the Turkish border with Europe

Het Belang Van Limburg is cynical when he writes: “This is how it goes with great performances. They are extended because of their success. One more week and we – the 11 million Belgians – will be able to take advantage of the farce of the federal formation ”.

“For the moment, the country’s two largest parties are simply unwilling to find solutions,” the newspaper said. Understand the N-VA and the PS.

“The specter of new elections looms on the horizon. Only: what does that solve? In a climate where politics do little to combat anti-politics, the extremes threaten to become even more important than May 26. “

Between the announcement of King Albert recognizing being the biological father of Delphine Boël and that of King Philippe extending the mission of Bouchez and Coens, there are two common points, explains Het Nieuwsblad
: “Despair and procrastination”.

“By deciding to let the duo of faulty informants manage for another week, the King saves time. (…) Because political parties refuse to take responsibility constructively, King Philippe will one day have to find the courage to make a choice, to choose a color. The longer the delay, the more serious the consequences can be for the Royal Institute. Her father proved it. “