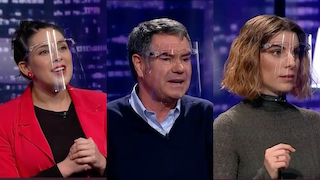 In a new edition of We can talk, the talk show of Chilevision conducted by Julian ivory, the guests were submitted to a question that opened an interesting debate about the possibility of having more than one partner at the same time, the so-called polyamory.

Only Cariola and Orsini got up. At that moment, the communist deputy explained her point of view. “I believe that relationships cannot be one of possession, of domination, I have been learning it along the way. They form us and that is part of the deconstruction of the logic of romantic love, which is like making us believe from a very young age that we are princesses and we are going to meet a prince charming with whom we are going to be for a lifetime ”.

Read also: Pepa Hoffmann and her guilty pleasure in music: “I know all the songs from the NO fringe”

“It does not mean that one is looking all the time for open relationships”, indicated the deputy, who acknowledged that she has not yet experienced a relationship of this type.

After that, Senator Ossandón said that “Karol is caricaturing something that seems absurd to me, because love is not free from suffering, from problems, the other way around. I have been married for 34 years and a million times my wife has wanted to kill me and I another million ”.

Immediately, the PC parliamentarian explained that “what I am saying is that there are other decisions (apart from monogamy) and that is super important and in this sense people should have the right to possibility of flow ”.

Read also: Deputy Maite Orsini to Iván Guerrero: “Did I think I’m hollow … I didn’t hold onto the egg …”

Meanwhile, the deputy Orsini said that when she begins a relationship with a partner she wonders what the rules are. “Not because you tell me ‘you want to play with me’ I say yes and that implies monogamy, that I go to see your family on Sundays, no. It seems to me that each couple has to have their own rules and I am not comfortable with monogamy ”.