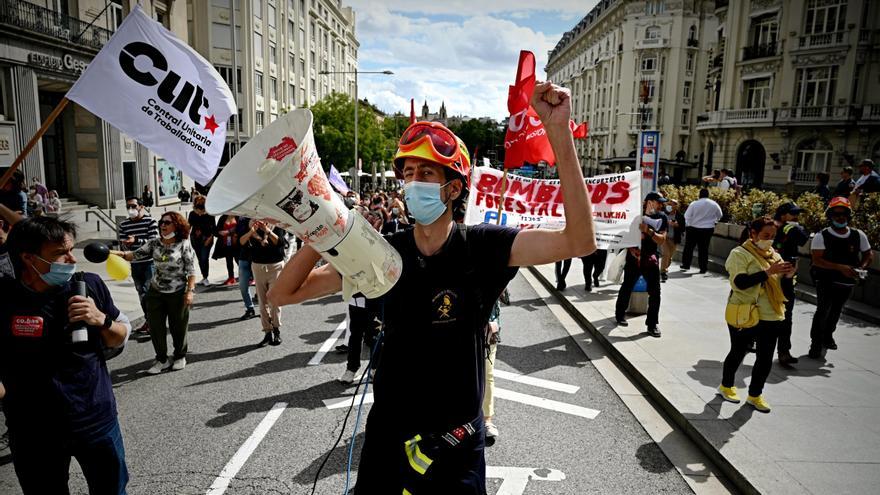 Demonstration of interns in Madrid.
EFE

Hundreds of public sector interns from almost all over Spain have demonstrated this Saturday in Madrid to demand the Executive end of its temporality and stability in their jobs.

In a festive atmosphere, singing and carrying banners that read ‘Stop the abuse of temporality’, the protest has run between Atocha and the Ministry of Finance and Public Function, where the protesters have demanded a just solution for the people who have safeguarded the utilities on many occasions and cannot be paid now with layoff.

Susana Arroyo, from the Intersindical Confederation, has indicated to EFE that the only objective they pursue is to continue working, and he has asked that the talent in the public administration not be wasted by throwing out people who know how to work in them.

At this point, it should be noted that the interim request that the bill that will establish the criteria to reduce the temporality in the administrations, in the processing phase, transpose the European Directive and stabilize the more than 800,000 public employees in fraud of law who have been temporary for more than three years.

Another of the protesters and Solidaridad Obrera militant, Jorge Del Olmo, has demanded the fixity of the personnel hired in fraud of law in the public administrations, with decades behind them taking the public service forward and that, “Overnight, you’ll be out on the streets with a ridiculous compensation“.

Del Olmo has emphasized “stability and fixity for social justice” and that the Government heed the European opinions, which require the cessation of temporary employment in public administrations.