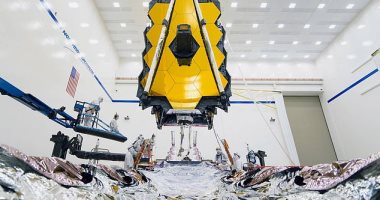 Prepare James Webb Space Telescope (JWST) NASA’s largest telescope in space, launched in 2021, is an ideal tool for exploring these worlds, as it revealed the chemical composition of an exoplanet, and the released data indicate some important results.

Gases in the atmosphere absorb some of the light, leaving imprints on starlight in the form of dips in brightness at certain colors, or wavelengths. The JWST telescope is particularly well-suited for studies of the atmospheres of exoplanets because it is an infrared telescope.

Most gases in the atmosphere, such as water vapor and carbon dioxide, absorb infrared radiation rather than visible light.

An international team of exoplanet scientists using the JSTW has studied a planet roughly the size of Jupiter called WASP-39b. Unlike Jupiter, this world only takes a few days to orbit its star, so temperatures reach 827 degrees Celsius. Observing it gives the perfect opportunity to explore how The planetary atmosphere behaves in conditions of extreme temperatures.

WASP-39b appears to have a relatively low amount of carbon relative to oxygen, indicating that it likely formed farther from the star where it could have easily sucked water ice from the disk, than its very close orbiting stream.