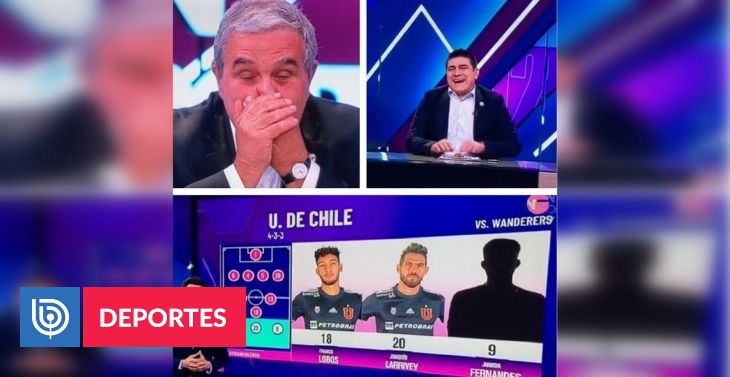 An attempt at ‘prank’ has to Manuel De Tezanos and the ‘Todos Somos Técnicos’ team from TNT Sports at the center of the controversy. In social networks, University of Chile fans condemned the presenter’s statements and They accused the popular program of being racist.

But what caused the outrage of the blue fanatic? While one of the journalists of the channel announced the probable formation of the ‘U’ for the duel on Wednesday against Santiago Wanderers, a shadowed and predefined image where the photo of Junior Fernandes should have gone generated the questioned ‘joke’.

“It looks the same in the photo Junior”De Tezanos said with a laugh, causing laughter from some panelists and gestures of surprise from others.

After the obsolete ‘joke’, the journalist continued with a questioning of the production of the program and expressed: “How can we not take a picture of Junior? He has played 500 times for the National Team “.

However, despite the uncomfortable moment lived among the panelists, De Tezanos continued in the same line and He joked again, alluding to the skin color of both Fernandes and the journalist Jorge Cubillos. “Is it you or Junior in the photo?”

A situation that caused the outrage of fans of the lay cast on Twitter, where they expressed their rejection of the unusual ‘joke’ considering it racist, while others made a call to denounce that chapter to the National Television Council.

This is reportable to @CNTVChile? Here is the link for filing complaints https://t.co/SLGLe0BxG8@TNTSportsCL

They have been over the top in this program for a long time, and it is not only @ManuelDTP With this unpleasant situation, the other day Marcelo Vega gave Herrera a size with the shirt if you drink, don’t drive, disrespecting a deceased person.
Enough of Vega on TV https://t.co/vH1fClHh2j pic.twitter.com/7D0jgQ1iu1

Previous times they have talked to him and he shits himself laughing. They share the size.

Call Junior Fernandes and shoot him with this to see if he laughs @ManuelDTP. https://t.co/zovnimO4oD

@TNTSportsCL My haystack has blocked me De Tezanos, are these sizes seriously tolerated? If it is not two-way, it is xenophobia ????????‍♂️ https://t.co/8uVzvAM3kX

These are things that the person says without thinking, believing that he is going to break it with a joke, but that in the long run he shits it more than necessary, with a racist “joke” and fome

From Tezanos several months ago he won the character https://t.co/4UtqWCcyaq

It comes out the same in the photo hahaha, how badly Detezanos and Ordinario de Vega … @TNTSportsCL Will you say something about Laughing at Colored People ???? https://t.co/YsZ5qRbhBP

Complaint is filed with the CNTV.

@ManuelDTP and then you are doing the victim on twitter, racist culiao !!
It is not enough for them with their double meaning jokes of prehistory in that shitty program, denounced to the CNTV for weon! https://t.co/7rGGjLx2nF

@ Basaure360 He didn’t laugh. It’s all that is right. He knows football and has much more judgment than several of his co-workers. He’s a much better communicator. My respects to him. This episode is reportable to the CNTV. https://t.co/CgjyWFBZjO