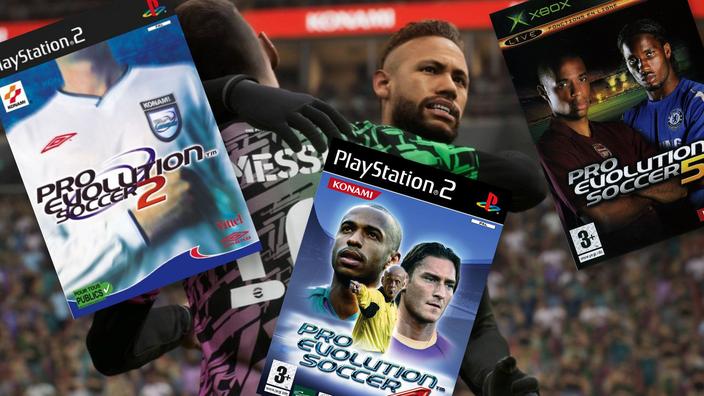 VIDEO GAMES – Expected by fans of the license, PES 2022 will ultimately not exist and gives way to eFootball, a free game. Return on the history of the franchise and its new face.

It is a major page of video games that has just been turned. This Wednesday, Konami announced to abandon the name Pro Evolution Soccer, replaced by eFootball for its football simulation, which has sold tens of millions of copies. But that’s not the only change coming for this soccer game landmark. From its beginnings as International Superstar Soccer on Super Nintendo to its decline in the 2010s to its heyday in the 2000s, PES has marked the history of the soccer game.

A sensational entry into the market

PES or eFootball as it should now be called, may have lost its aura but the reactions on social networks speak for themselves. Since the first ISS, no less than 23 opus have been released. The beginnings of the football saga go back to 1994, when Konami released International Superstar Soccer for Super Nintendo. This opus followed by the Deluxe version a year later lays the foundations for football simulation in addition to being a great commercial success.

Early players still remember that time when Konami did not have the rights to properly name players. Redondo was called Redonda, Roberto Carlos was named Roberto Larcos and Zinédine Zidane responded to the name of Ziderm. A lack that has never bothered players, seduced by the freshness of the gameplay and the immersive side brought by the commentators present in the game. In addition, at a time when football games rely on the arcade, ISS stands out by bringing variety in the style of play of players and teams. Konami therefore signs a stormy arrival in the world of football video games and continues to stand out with ISS 64 developed for the Nintendo console. This opus raises the graphic level and especially introduces the famous in-depth pass, the cornerstone of construction in football games.

However, as legendary as this game is, many people attribute the start of the PES saga to ISS Pro Evolution. Developed by another Konami studio located in Tokyo, this opus was released on Playstation 1. The game is remembered thanks to the tactical depth provided by this episode and some still have to smile when they think back to their games played with the Nigeria of Babangida and West, one of the most legendary teams in the history of video games. But the main novelty of this opus is above all the arrival of the famous Masters League whose future is uncertain today on eFootball. A game mode which offered the possibility of improving his team from lambda players and which greatly lengthened the lifespan of the software. With ISS, Konami is thus fully entering the 2000s.

Konami subsequently decides to take a turn for its license. The Japanese studio puts an end to the name ISS and launches Pro Evolution Soccer on Playstation 2. With this turn, Konami definitely takes the ascendancy over its competitor FIFA, in particular thanks to the flagship episodes that are PES 5 and 6. These opuses, where we find Thierry Henry and Didier Drogba on the jacket, are now cult. In the years of their release, these two games are also the best-selling cultural products in France. PES thus passes into another category and dominates the market on Playstation 2.

Undisputed king of the football game, Konami’s flagship license does not negotiate its transition to the new generation of consoles that are the Playstation 3 and Xbox 360. At the time of the democratization of online, Konami does not change its recipe and the The public is starting to turn to FIFA, which benefits from official club and selection licenses as well as a much more advanced online matchmaking system. It is also with FIFA 09 that appears the famous FUT game mode that has redefined the modern football game. From this opus Konami takes a considerable delay until the crash of PES 2014, a failed game which remains known for the poor realization of the faces of the soccer stars.

The regain of form before the revolution

With the loss of many followers of the franchise, PES gets back to work and will experience constant progression between the 2015 and 2018 opuses. The game tries to get up to date and assumes its simulation side against a FIFA that has become the juggernaut of the arcade soccer game. The game distributed by EA has taken a considerable lead in terms of immersion, ergonomics of menus, game modes, but above all the licenses so dear to the majority of players.

Despite these shortcomings, PES still ends up finding part of its audience. With the introduction of the MyClub mode (competitor to FUT), a graphics engine that allows to have faithfully modeled faces as well as a great care attached to the gameplay, PES takes again colors. Thus, with PES 2019 and 2020, Konami returns very slightly in the race and also introduces the name “eFootball” during this last opus. Still aware that the current formula will not hold up against the overwhelming FIFA, Konami decides not to leave PES 2021, except for a slightly updated version of the previous episode. When this lighter version is released, Konami announces that it is already working on PES 2022.

Expected at the turn this year with the advent of the new consoles, PES surprised but perhaps not as expected. While the gaming community wanted a reworked version with an overhaul of the Master League and online mode, Konami tweaked PES to its very nature. Like all sports games, PES had accustomed us to going out at the same time as the start of the championships for a cost of around 70 euros. From now on, the game will be free and only 9 teams will be available at launch. A version that will be playable in cross-platform including on mobile. A decision that makes people cringe on Twitter, since many are worried about the quality of the gameplay which will also have to stick to that of the mobile version. Especially since the uncertain future of the Masters League and local modes of play is causing concern. With this opus, PES therefore aligns itself with recent developments in the video game market, dominated by free-to-play licenses such as Fortnite or Warzone and whose income comes from sales of in-game cosmetic items. A change not necessarily well received by fans and already making many early players nostalgic.