Korea’s first lunar orbital probe ‘Danuri’ was separated from the projectile 40 minutes after launch on the 5th. After that, it succeeded in first communication with the ground station at 9:40, about an hour and a half after launch. The image shows the separation from the SpaceX projectile Falcon 9. SpaceX official channel capture

Korea’s first lunar orbiter Danuri (KPLO), which left for space on the 5th, will perform an important maneuver at 2 pm on the 2nd of next month.

According to the Korea Aerospace Research Institute on the 31st, Danuri is about 1.33 million km away from Earth as of 2 pm on the same day. It is heading to the L1 Lagrange point at a speed of about 0.2 km/sec, and has been successfully sailing until now.

Danuri heads to the moon using the ‘Ballistic Moon Transition Method (BLT)’, which uses the gravity of the Earth, the moon, and the sun to enter the lunar orbit. It flies to a maximum of 1.56 million km, which is four times the distance from the Earth to the moon, about 384,000 km, and then returns. It has a longer travel distance compared to other trajectories, but it can reduce fuel consumption by about 25% compared to the direct way to the moon.

This third trajectory correction is especially important on the way to the moon. Jo Young-ho, head of the mission operation team of the Moon Exploration Project, said, “It is an important starting point for Danuri, who was heading to the sun, to turn to the moon. This third trajectory correction is a ‘bridge’ maneuver that connects these two roads.”

If this maneuver is carried out properly, Danuri will be able to reach the lunar orbit at 2:00 am on December 17, the target schedule. Team leader Cho said, “After 48 hours of performing the third trajectory correction maneuver, we can check whether Danuri is following the trajectory normally.”

The Danuri that Korea sends to the moon for the first time in history is 3.18m wide, 6.3m long, 2.67m high, and weighs 678kg, and was developed to verify and secure the technology based on space exploration. It is carrying five domestic payloads such as observation equipment and space internet developed by domestic research institutes and universities, and a lunar polar imaging camera provided by the National Aeronautics and Space Administration (NASA). From next year, Danuri will orbit the moon 12 times every day for one year, performing the assigned mission. 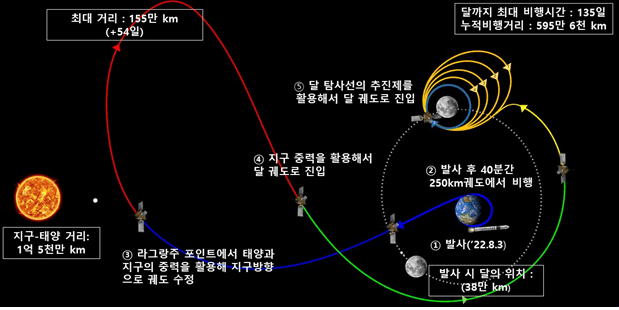 Moon orbit transition trajectory and lunar orbit entry process after Danuri launch. Provided by the Ministry of Science and ICT

Because of the interest rate hike, gold records the longest losing streak in 4 years