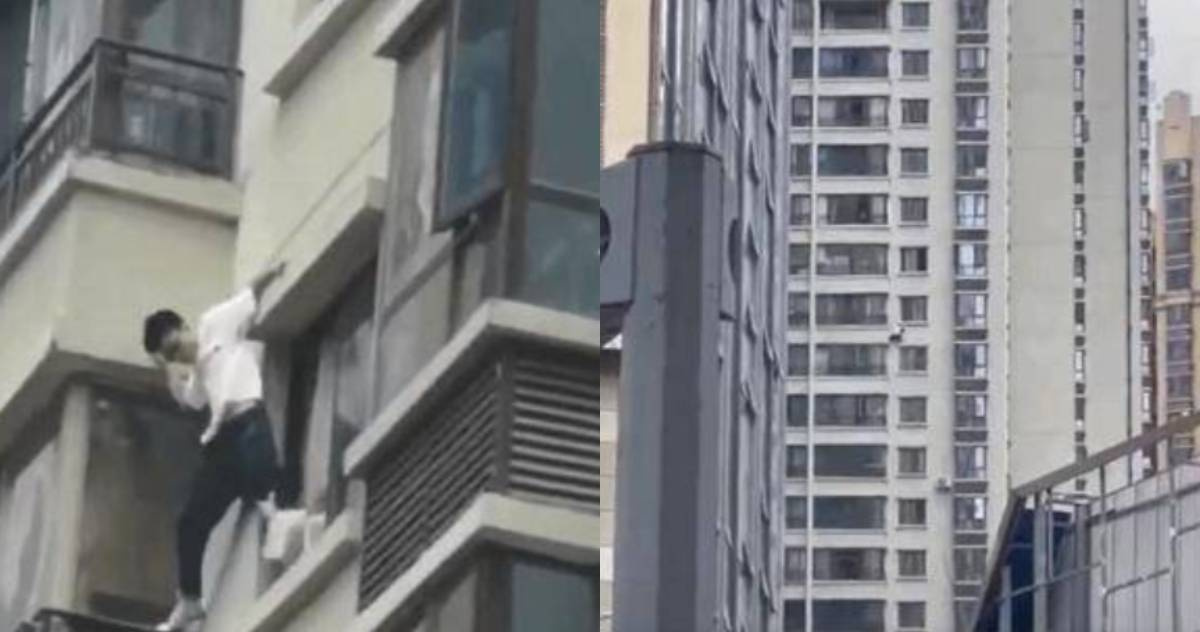 The man in white goes barefoot and walks over the eaves. (Picture / Retrieved from Weibo)

A thrilling scene appeared in Guizhou, mainland China a few days ago! On the afternoon of May 27, outside a building in Huaguoyuan Community in Guiyang, a man in white suddenly appeared on the roof of the top floor, and his behavior was quite strange. In between, he flipped through his mobile phone for a while, then leaned down again, and then climbed from the 37th floor to the 3rd floor with his bare hands. The whole process was photographed by passers-by with their mobile phones, scaring many people.

According to Lu media reports, the man appeared on the top floor of the community on the 27th, and saw him with his head lowered and his bare feet hanging in the air, sitting sideways between the window edge and the terrace. He was trying to take something, behaved strangely, and looked lonely. This thrilling scene was just captured by Mr. Lin with his mobile phone. The height of the 37th floor is about 100 meters, and it will fall down if you are not careful. Everyone watching is terrified.

After the firefighters arrived at the scene, because they did not understand the reason for the man’s strange behavior, they urgently looked for a safe rescue plan, but at this moment, the man in white escalated his actions again, and saw his body in a large shape, hanging in the sky, Grabbing the eaves, stepping on the windowsill and descending step by step, climbed all the way from the 37th floor to the 3rd floor, only to be pulled into the house by the firefighters who caught the opportunity, ending a false alarm.

The head of Houchonglu Fire and Rescue Station, Nanming Brigade of Guiyang Fire Rescue Detachment, said, “We are also going down, following him, and carrying out a rescue floor by floor. It is also to not disturb him, for fear that he will be frightened and fall off. It backfired. We protected him floor by floor, appeasing the man as we walked, and then on the third floor, we waited for an opportunity to rescue him.”

As for the reason why the man in white climbed the wall with his bare hands, there are different opinions on the Internet. Some people think that he may be Xiao Wang. He was caught cheating on the spot, so he hurriedly escaped from the house to the top floor without even wearing his shoes. Later, he found that there was no way out Escape, had to risk climbing downstairs. It is understood that the man is not in serious condition at present and has been transferred to the police station in the jurisdiction. The specific reason is under further investigation.

Mini Electric Moke | photos from the 60 Years of Bond edition