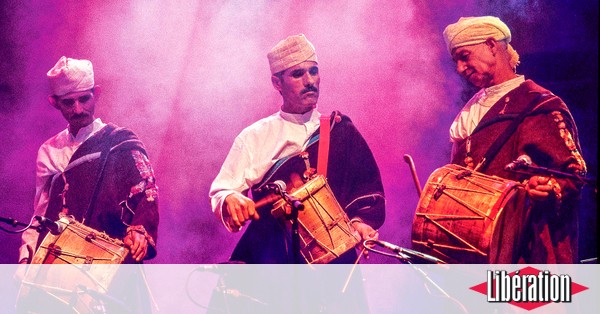 For a long time, musicians from the far north have come to take inspiration from these Moroccan bards at the foot of the Rif, in the mountains south of Tangier. This is where Jajouka is, a country blessed by God according to custom. This is where Brian Jones, Ornette Coleman, Barney Wilen and the Rolling Stones came, in the epics of the 60s and 70s, to enjoy the bewitching sounds of nira, the bamboo flute, or ghaita, the Maghreb oboe , to the transcendent rhythms of the lute-drum or the majestic bendir. Like Brion Gysin, the beatnik poet William Burroughs will make the trip and, as a pioneer, will detect in this music with high telluric content a “4,000-year-old rock’n’roll group”.

Since then, the village still hosts pilgrimages to honor the tomb of the evangelist Sidi Ahmed Sheikh, and some tourists who have left to recharge their batteries. Since then, the brotherhood of Gnaoua, other Moroccan healing musicians, has fascinated the West, leaving aside the worshipers of the god goat Boujloud, installed further north. Since then, the charismatic leader and hajj Abdessalam Attar has left, leaving the keys of the tradition to Bachir, one of his young sons. And therefore, this latest born in a millennial tradition decided to radiate his music beyond its natural borders, using the terms of the messianic contract behind this music, even to rejuvenate and invest other songs: he will collaborate in particular with Maceo Parker and Lee Ranaldo, and at the turn of the 2000s with Talvin Singh, who will have the intelligence to add only a few small beats stuffed here, two fingers of atmospheric jungle over there.

First on the rope, producer Bill Laswell, a good disciple of the healing principles of the Ornette Coleman harmony, set off in November 1991 on behalf of Axiom, his formidable label with an esoteric name to say the least, given the mission to explore the virtues of sound by inventing alchemical formulas – nothing to do with the ass-blessed world music of Real World by Peter Gabriel at the same time – between musicians from different universes, giving birth to a series which is a milestone. No one has forgotten the mighty Trance of Seven Colors between Pharoah Sanders and one of the best maalem gnaoua, Mahmoud Guinia.

Exception to this golden rule, Apocalypse Across the Sky is a pure field recording without artifices, made in 1992 where, as captive listeners, we witness for more than an hour the various trances of a ceremonial that goes back to the dawn of time. Haunting rhythms, whirling breaths, heady voices, meditative arpeggios of the lute with large drummed processions, the magic works as much as the sound recording is always up to par, without overbidding or effects that would spoil the case, on time a reissue in vinyl format.

The Master Musicians of Jajouka Apocalypse Across The Sky (Axiom).