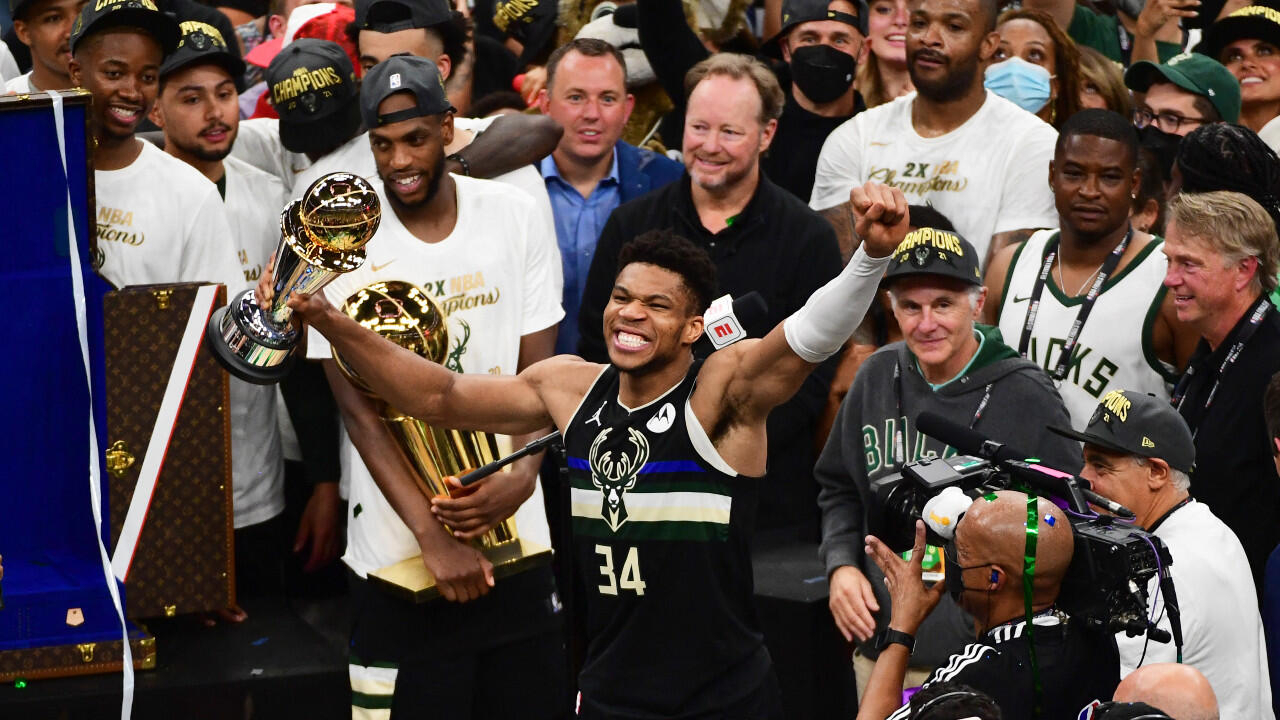 The Milwaukee Bucks won the second NBA title in their history, Tuesday, July 20, by winning at home against the Phoenix Suns. Led by a Giannis Antetokounmpo to the top of the basketball world, the franchise has lined up four successes in a row after losing the first two rounds of the series.

Their first crown was 50 years old! The Milwaukee Bucks won their second NBA title on Tuesday. Carried by a legendary Giannis Antetokounmpo, the team won at home against the Phoenix Suns (105–98) after a tough and contested match.

Defeated in the first two rounds of the series, the “deers” lined up four straight wins to win 4-2 in the final, a poster that no one expected but which turned out to be thrilling.

Fifty years ago, the Milwaukee franchise was carried by another phenomenon, a certain Lew Alcindor, who changed his name to Kareem Abdul-Jabbar immediately after that title.

In this city in the Great Lakes region, around 65,000 supporters wore “Bucks in Six” jerseys – the Bucks winners in Game 6, a slogan that has gone viral to ward off the memory of painful defeats in this fateful match in the play-offs -, “Fear The Deer” or in the name of Greek winger Giannis Antetokounmpo. They gathered near the venue to celebrate the title.

Throughout the meeting, Antetokoumpo, twice voted best player in the league (MVP), in 2019 and 2020, reigned in both defense and attack, achieving one of the most striking performances in the history of the NBA, with 50 points, 14 rebounds and 5 blocks in the end.

Dropped a good part of the meeting by his lieutenants Khris Middleton and Jrue Holiday (4 out of 19 on shots), the “Greek Freak” has further raised his level, he who already had more than 32 points average so far in this final.

The number 34 was logically elected best player of the final, which he dominated with his head and shoulders.

After the game, he thanked “those who believed in (him)” and his teammates. “They play hard every game. I had faith in this team. I wanted (to win a title) here with these guys. So I’m happy.”

The Suns with their heads held high

Facing Giannis Antetokounmpo, Phoenix played with the energy of despair, led by his leader Chris Paul (26 points) who was at the end of his strength.

After having started the game very badly, the Suns found themselves behind by 13 points at the end of the first quarter (29–16), unable to take a long shot (3 of 17 in the first half).

With a heroic defense, which caused a shovelful of stray bullets, Phoenix came back and held the entire game, giving himself the opportunity to believe it until the end, or almost.

Pulsive during the three previous meetings, still well embarrassed by PJ Tucker, Chris Paul came back to life while his team was on the verge of asphyxiation, making a series of small baskets at mid-distance which made his reputation.

Unable to find the three-point sights, the Suns went for the baskets closer to the circle, with some success.

Expected to pack the match, the Suns back Devin Booker stalled (14 of his 22 missed shots), especially at the end of the game, losing 6 balls in total.

After having delivered several very high performances in this final, the number one of the Suns was even countered several times by Antetokounmpo.

No one could beat this Giannis, who at times made it seem like the Bucks were outnumbered in the field.

A last shot from Middleton, very awkward so far, at the entrance of the last minute, followed by two throws, permanently put the visitors of Arizona at a distance (102–96).

Once again during these play-offs, these Bucks sometimes considered too tender in previous seasons, have achieved success on the wire, full of authority.

Phoenix comes out of the final with his head held high, even if he undoubtedly missed an opportunity in Game 5 at home on Saturday.

At 36, Chris Paul may have let slip his last chance to score a title on Tuesday, after 16 seasons in the league and a lot of setbacks.