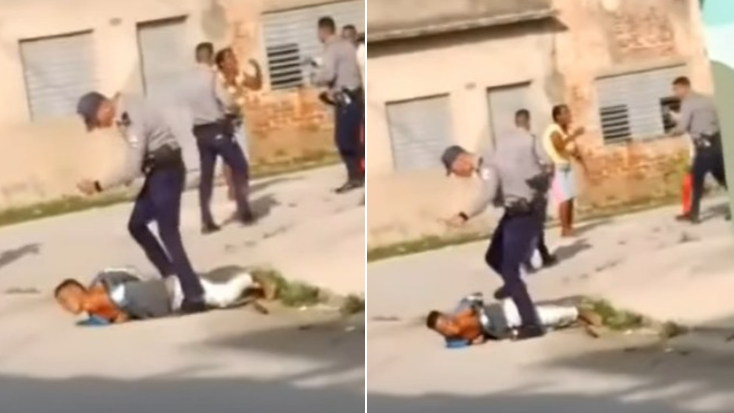 The Cuban Ministry of the Interior (TO MENTION) took more than a day to offer his explanation about the events occurred in the neighborhood of Condado Sur, in Saint Clareafter the images of a group of uniformed men facing a crowd who sought to help a minor injured by a bullet by the Police circulated on social networks.

In its official statement about the facts, the institution assured that on the afternoon of Friday, July 1 police officers “They responded to the call of the population before a disturbance of public orderin which the lives of two women who were inside a house, in the South County of Santa Clara popular council, Villa Clara province, were in danger.

According to the note, the women “were besieged by eight individuals with terrible social and moral conduct, who attacked the dwelling with stones, carrying knives and hurling insults and threats at them, for personal reasons.”

According to the MININT, When the police arrived, these subjects “attacked the law enforcement officers with stones; one of them tried to deprive one of the agents of life against which he threw himself with a chalk knife in one hand and a machete in the other, injuring him in the forehead”.

“Facing the imminent danger to the officer’s life, his companions made use of the regulation weapon, in defense of his physical integrity”assured.

The MININT acknowledged that in the incident “the main aggressor died” and, as usual, criminalized himassuring that he was an individual “characterized by violent behavior, with multiple criminal records.”

He also added that “during the action a citizen unrelated to the altercation was injured, who received immediate medical assistance,” and closed the note indicating that “the competent authorities are carrying out a rigorous investigation to fully clarify the incident.”

The MININT at all times avoided acknowledging that the individual shot was a minor under 17 years of age. Nor does it explain why, as seen in the images recorded by witnesses to the events, the subject is lying in the middle of the street, handcuffed behind his back and bloodied, while police and red berets try to violently scare away dozens of people who try to intervene. .

From Santa Clara, the opponent, former political prisoner and leader of the United Anti-Totalitarian Front (FANTU), Guillermo Fariñas denounced the murder of the young Zinadine Zidan Batista Álvarez, 17, a victim of the events reported by the MININT. “The police officer who perpetrated the murder was carrying plate #15388,” he assured.

In a thread on twitterspecified that the deceased “had participated last year in the July 11 protests for freedom. (…) He was arrested in the Provincial Criminal Investigations and Operations Unit (UPICO) for a period of 23 days,” and he would have left “after paying a fine of 3,000 Cuban pesos”.

Fariñas, who stated that he obtained all the information from eyewitnesses to the events, whose names he indicates in his publication, explained that “a brawl occurred in a queue at the ‘La Latina’ Currency Collection Store, and therefore, Several PNR agents appeared. The relatives of the murdered man, who are nicknamed ‘Los Pitirres’, decided to confront the gendarmes, for which the uniformed officers used their firearms and neutralized the threat that the deceased could have posed, since he received gunshot wounds to the shoulder and arm”.

“The murdered young man died handcuffed with his mouth against the floor due to bleeding after receiving three bullet impacts from a firearm. The fatal shot was already unnecessary, because the deceased was already wounded and unable to put the life of the police officer at risk,” he said.

“The greatest indignation of the eyewitnesses with whom we interviewed was always that the murdered minor, Despite having already received two bullet wounds, from the floor he continued to bravely challenge the police officers and they kicked him, as well as beat him with a regulation tonfa”ends his story.