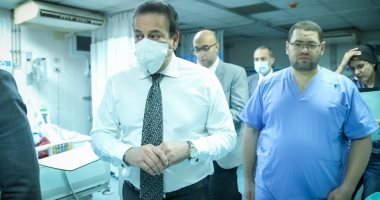 Dr. Khaled Abdel Ghaffar, Minister of the health And the population, the director of Bulaq El-Dakrour General Hospital, was referred for investigation, based on what he witnessed of the low level of services provided to citizens in the hospital, during the minister’s visit to the hospital, yesterday evening, Saturday.

Dr. Hossam Abdel Ghaffar, the official spokesman for the Ministry of Health and Population, said that the minister made a surprise visit to Bulaq El Dakrour General Hospital, as part of his ongoing field visits, to follow up on the level of service provided to citizens.

Abdel Ghaffar added that the minister criticized the delay in performing surgical interventions, the irregular schedules of medical teams, and the absence of some doctors and the medical team’s assistant, so he decided to refer all those absent for investigation, and also criticized the low level of hygiene in the hospital.

Abdel Ghaffar indicated that the minister directed an increase in the number of cleaners at Bulaq El Dakrour General Hospital, and was also assigned to seek the assistance of a service company, to supervise the level of hygiene in the hospital, in order to preserve the health and safety of patients and frequent visitors to the hospital.

Abdul Ghaffar said that the minister visited the hospital’s internal department to see the level of medical services provided to patients, as well as the operations department, intensive care, radiology department, and the analysis lab, and reviewed the patients’ entry and exit records.

“I waited only for this day”…’Sunday’s Youngest Daughter’ Kim Shin-young, ‘National Singing Contest’ first broadcast with tears and big words