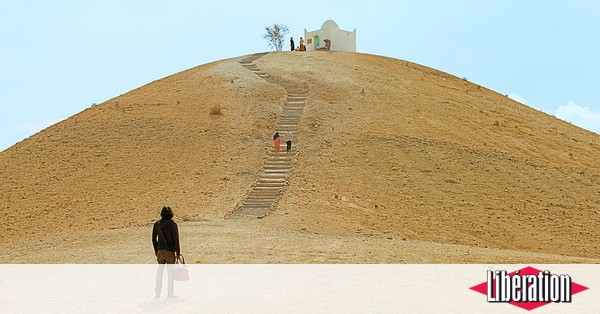 Where are myths born? Maybe on a pile of stones in a Moroccan desert. It is in any case there that begins, in the first feature film by Alaa Eddine Aljem, the legend of an unknown saint who, if we know nothing of what he was (or even if he has really been), nevertheless performs many miracles. Its small white mausoleum stands on top of a peeled hill; it is built in the time which separates the prologue of the film from its first chapter. Amine was seen there, a thief on the run, burying his nest before being pinched by the police; when he returns after an ellipse of a few years to look for him, a micro-city has sprung up there (first miracle), and there is a cult to what is inside the tomb. To each his idea, therefore: for the thief, his steaks; for so many others, an unknown saint; for a grieving farmer, the fields abandoned since this urbanization project, the source of all ills.

The mausoleum is the object of many lusts, so that it will take the thief repeated assaults to try to seize his booty, thwarted each time by increasingly absurd initiatives – due to the zeal of the guardian and his dog (who will be violently attacked, gold tooth grafts will follow), to the boredom of a nursing assistant who disfigures the place to pass the time, to the superstition of such an idiot acolyte that he inherits the nickname “brain”, etc.

The intrigue develops in a setting which, were it not for the rural drought and the geographical anchoring, would remind a little of these capitals of the ex-communist block where also grow and at high speed all kinds of brand new monuments dedicated to new style dictators, cults not, as we know, not always indexed to religion but generally flourishing in a vacuum. The camera marvelously records this operetta landscape, always placing itself at a good distance to make the hill either an Everest or a ridiculous mound of comics, reinforcing the vaguely Tati charm of the whole, out of time, even blocked. in an interregnum.

If the adventures described by the Miracle of the unknown saint, revealed at the Critics’ Week of the last Cannes Festival, are resolutely wacky, the staging shows itself with restraint, full of silence and idle time which underline the pure comic of situations based, not on the everyone’s ridiculous – the film is absolutely not a mockery, and the characters only exist by and for their narrative function – but on the hindsight offered by breaths that allow us to consider madness with wisdom. The tone would indeed be that of a little tale by Nasr Eddin Hodja, the madman who was wise (whose time has come to let go that his mausoleum, in Turkey, would be empty, the body never having been found) and the general mood, a little taken aback – each skit resolving in a call of air that reminds a little of the falls of short films or the best news.