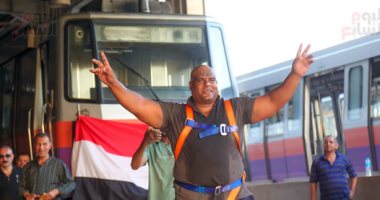 The Seventh Day TV cameras documented the moments of the famous Captain Ashraf Kabonga’s success in pulling 6 metro cars weighing 220 tons over a distance of 4 metres, setting a new record according to what Kabonga confirmed, to be registered in the Guinness Book of Records..

Kabonga broke the Australian record, which was set at 204 tons in 2021, for the Egyptian champion to record a new achievement amid the encouragement of all attendees and to register a new number in the Guinness Book of World Records..

The Egyptian champion said that although the planned number was not achieved, by 4 and a half meters, the name of Egypt was registered in the international encyclopedia with a new achievement as a result of continuous effort and training: “I hope to be at the best of everyone’s expectations and as much as their confidence.”“.

Ashraf Kabonga, from Ismailia Governorate, was ranked “the strongest man in the world” by the Guinness Book of Records, after he broke the Indian record for pulling giant trucks, and pulled a 15-ton truck with his teeth, which is greater than the number achieved by an Indian who pulled a truck with a weight 13 tons.

Last March, Ashraf Kabonga succeeded in pulling the subway train into storage workshops in the Shubra El-Kheima area in Qalyubia, so that Ashraf Kabonga became a focus of attention at that time, after his achievement in which he sought to pave the way for entering the Guinness Book of World Records..

World Day for the Poor: A Healthy Challenge to Our Lifestyle

How to make homemade scones that would please the Queen of England?