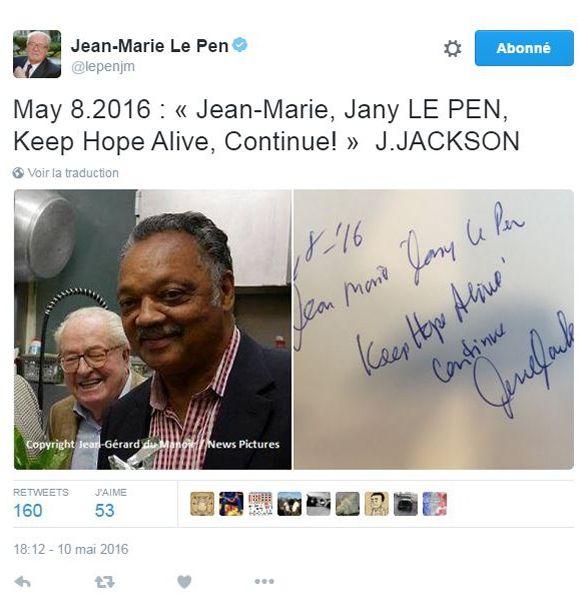 THE POLITICAL SCAN – The fellow traveler of Martin Luther King denies knowing the co-founder of the National Front, with whom he however shared a dinner in Paris last Sunday.

Jean-Marie Le Pen pictured alongside American Reverend Jesse Jackson, hero of the civil rights struggle in the United States and fellow traveler of Martin Luther King: the image may surprise. In a tweet posted Tuesday on social networks, the founder of the FN shows a note addressed to him and his wife Jany, and which dates from May 8. “Hold on to hope and carry on,” writes Jesse Jackson.

But overnight from Tuesday to Wednesday on Twitter, the civil rights activist seems to have wanted to distance himself and deny any organized meeting. “I didn’t know you were coming. I had never met you. I do not share your points of view,” he replies to Jean-Marie Le Pen.

Contacted by the Scan, Jean-Marie Le Pen nevertheless affirms that a “friendly and informal” dinner was indeed organized on the initiative of “common Moroccan friends”. If the two men did not really share the same political battles, the co-founder of the FN, he nevertheless considers “honorable” the commitments of the African-American pastor. “It was the first time we met. We were seated next door and had a cordial conversation. If he did not agree with this initiative, nothing compelled him to go there, ”says the father of Marine Le Pen, surprised by the last message from the reverend. Did the octogenarian try to embellish a chance meeting? “He was twice a candidate for the presidency of the United States, he obviously knows who I am! He even signed this little handwritten note, it’s still proof, ”he insists. This Wednesday, the “Menhir” split a new tweet to prove his words:

The Reverend Jesse Jackson was present in Paris to participate on Tuesday in the tenth commemoration ceremonies for the abolition of slavery in France, in the presence of Christiane Taubira and François Hollande, 15 years after the adoption of the “law tending to the recognition trafficking and slavery as a crime against humanity” carried by the former Keeper of the Seals.

In a tweet, the related FN mayor of Béziers was surprised by the presence of the pastor, whom he describes as “anti-Semitic”, alongside the head of state.

Jesse Jackson has already sparked controversy by his positions, particularly during his candidacy for the American presidential election in 1984. More recently, in an interview granted to the New York Post in October 2008, he notably hoped that the election of Barack Obama would put an end to the influence of the “Zionists who have controlled American politics for generations”. In August 2006, the reverend also visited Lebanon, in neighborhoods then bombarded by Israeli forces. The opportunity to meet two other sulphurous figures: the humorist Dieudonné as well as Thierry Meyssan, one of the founders of the Voltaire network.

Strengthening of the powers of Belarusian President Lukashenko validated