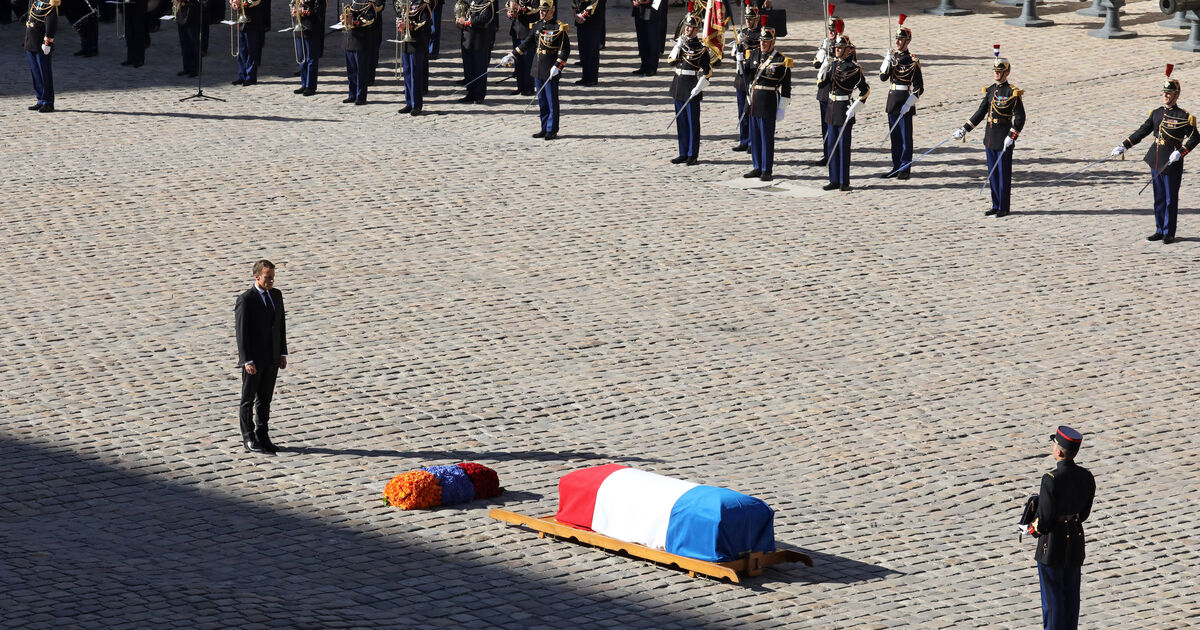 The icon of French cinema will be entitled to a national tribute on Thursday at the Invalides. If some details remain to be refined, the ceremony will be different from the popular tribute paid to Johnny Hallyday in 2017.

The scene is the same every time. The coffin, covered with the tricolor flag, enters the courtyard. The President of the Republic delivers a funeral eulogy, retracing the life of the deceased. A minute of silence is respected, before a few musical notes resonate. The national tribute paid Thursday to Jean-Paul Belmondo, who died Monday at the age of 88, after a rich career in cinema, will be no exception to the rule. Before him, Commander Cousteau, Stéphane Hessel, Jean d’Ormesson, Charles Aznavour and, more recently, Samuel Paty were notably entitled to it. These tributes take place at the Invalides or at the Panthéon, in Paris. The history-geography professor, killed in October 2020 by an Islamist terrorist, was the first to be celebrated at the Sorbonne, an emblematic place of knowledge and knowledge.

As of Monday evening, the Minister of Culture, Roselyne Bachelot, indicated that a tribute would be paid to Jean-Paul Belmondo, sacred monster of the seventh art, whose death aroused strong emotion throughout France, and even beyond. This Tuesday morning, it is the Elysée which announced its desire to organize a tribute. In fact, it is the President of the Republic who makes the decision, in agreement with the family of the deceased. A decision then recorded in the Official Journal.

“We will have to applaud very loudly”

Many are hoping for a tribute to the height of the actor, fan of stunts, to the banter and to the inimitable voice. “I wish it was happy to make it look like him.” We shouldn’t all have funeral faces, that would be sad and he wouldn’t like that ”, insisted Claude Lelouch, known for having directed Belmondo on the set ofItinerary of a spoiled child, on RTL. The managing director of the Cannes Film Festival, Thierry Frémaux, remembers a tribute “Very beautiful, very strong” returned to Johnny Hallyday in December 2017. “Jean-Paul Belmondo does not deserve less, differently, something else”, he said Monday. For, Jean Dujardin, the tribute “Will surely be solemn because it must be. But at the same time, we will have to applaud very loudly ”, explained the star ofOSS 117.

The national tribute, which will be paid to Jean-Paul Belmondo, was initially reserved for the military, “Died in the service of France in the accomplishment of their mission”, according to the Ministry of Defense. They are still entitled to it today. We think of Xavier Jugelé, gendarme killed on the Champs-Elysées in April 2017, or Arnaud Beltrame, who had taken the place of a hostage during a terrorist attack in Trèbes in March 2018. But the national tribute was extended to civilian personalities with a career considered exceptional.

National funerals, more rare, “Do not fit into a precise official framework, and can take place in places chosen by families, not necessarily at the Panthéon or at the Invalides», Explains the government website. They are, however, supported by the State. Those organized for Victor Hugo in 1885 had brought together no less than 2 million people in the streets of Paris. He was the first writer to benefit from a national funeral, previously reserved for the highest figures of the State. After him, Léon Blum, René Coty or Abbé Pierre had been honored in the same way. The last people, except presidents, to have received a national funeral are Simone Veil in 2017, the last hairy Lazare Ponticelli and the writer Aimé Césaire in 2008.

For the Presidents of the Republic, a national mourning is generally decreed. The flags are then put at half mast on public buildings. Under the Fifth Republic, all deceased presidents were entitled to it. A day of national mourning was observed in November 1970 for De Gaulle, in April 1974 for Pompidou, in January 1996 for Mitterrand, in September 2019 for Chirac and in December 2020 for Giscard d’Estaing.

The popular tribute, like the one organized in an unprecedented way for Johnny Hallyday in 2017, is intended to be less solemn, more free, even more festive. A car carrying the rocker’s remains had descended the Champs-Elysées before stopping in front of the Madeleine church. The French had come in droves to watch the procession pass by on the side of the streets. 15 million viewers followed the ceremony. For now, we do not know if the tribute ceremony to Jean-Paul Belmondo will be open to the public. This is the wish formulated by many close to the actor. According to LCI, 700 guests should be able to be present in the courtyard of the Invalides on Thursday, 1,000 other people could also be accommodated in the building. In addition, a giant screen should be installed outside for all those who could not have entered. The funeral of the actor will be held on Friday at 11 a.m. in the church of Saint-Germain-des-Prés.