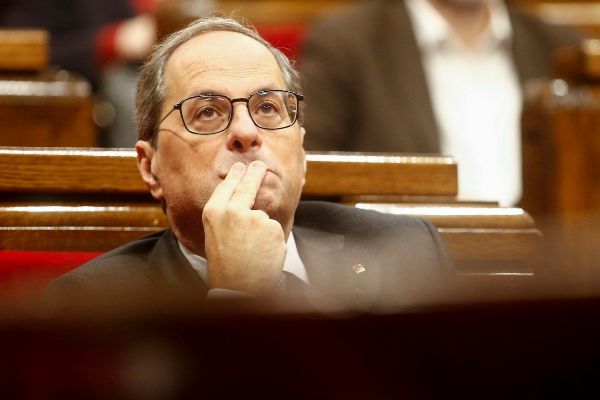 It was a maneuver in the design phase, but the possibility that Quim Torra will be disabled next Friday, January 3 and not in a few months, as planned, has forced JxCat to accelerate its plan to prevent ERC from inheriting the presidency of the Generalitat if the head of the Catalan Executive ends up removed from office.

The party led by Carles Puigdemont publicly requested this Saturday from the Republicans that Torra’s successor be a leader of JxCat and not the vice president of the Government and national coordinator of the Republicans,Pere Aragons, who, by law, will be responsible for assuming the presidency of the Generalitat in case of disqualification of the head of the Catalan Executive.

Two days after THE WORLD published the intentions of Puigdemont and Torra, the deputy of JxCat in Congress,Ferran Bel, he told ERC that “the reasonable thing is that at the head of the country there would be a person outside JxCat” if the president of the Generalitat loses his position for disobeying Justice.

The nervousness has been unleashed in the ranksneoconvergentsafter knowing that theCentral Electoral Board(JEC) study in less than a week the resources of the PP and Citizens who demand that Torra be disabled by the highest electoral body without having to wait for the Supreme Court to resolve the appeal presented by thepresidentagainst the sentence of disqualification for disobedience issued by the Superior Court of Justice of Catalua on December 19.

The electoral law allows to withdraw the minutes to Torra

PP and Citizens are entitled to the article of the electoral law that allows to withdraw the act of deputy to a parliamentarian convicted of a crime against the Administration even if the sentence is not firm. A gap that Puigdemont and Torra did not contemplate and that has forced them to address, in advance, the battle for the succession of thepresidentwith your government partners.

“I am sure that ERC does not want to take advantage of a court ruling to preside, even temporarily or provisionally, the Generalitat,” he said on SaturdayneoconvergentFerran Bel, who also recalled that JxCat “will continue to be the most voted force regardless of the resolution.”

Bel employed, already publicly, the same argument that sources of his party had transferred to this newspaper last Thursday when asked about their intentions to displace ERC from the Vice Presidency of the Government. “We hope that ERC does not take advantage of a state maneuver to throwpresident. The polls did not grant the presidency to ERC, “they said.

So the announcements are not made in the open, but the threat of the Electoral Board, the possible disqualification after Torra, has changed everything. The attitude of ERC has also varied.

“We are suffering very little,” said sources of the direction of the party presided over by Oriol Junqueras in conversation with this newspaper before the JxCat maneuver became public. On Friday, Republicans were already forced to go to the fore to try to abort the ruse of Puigdemont and Torra.

“We have a government agreement that we have to be able to respect,” the ERC spokeswoman recalled,Marta Vilalta, who did not want to believe “that the proposal[de apartar a Aragons]be firm. “

This Saturday, JxCat was responsible for clarifying that it is. That I will do everything possible to prevent the presidency of the Generalitat from ending up in the hands of ERC, which will trigger the public projection of Aragons and the Republicans’ options to win the next autonomous elections.