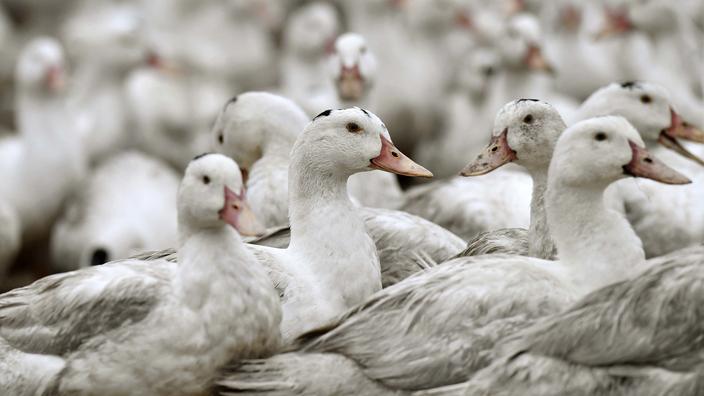 The government is launching massive preventive slaughter in the Landes, Gers and Pyrénées-Atlantiques to stem a new epizootic.

Despite a slower spread of the virus this year, avian flu continues to wreak havoc in the French poultry industry. After 231 French farms have been contaminated in France for a little over a month, the Ministry of Agriculture decided this Thursday to carry out massive preventive slaughter over the next three weeks, in 226 municipalities in the Landes, Gers and Pyrénées-Atlantiques. The goal: to stop the spread of the H5N1 avian virus and avoid a new major epizootic after three seasons (2017, 2018 and 2020) already plagued by this highly contagious virus, but not transmissible to humans.

Read alsoAvian flu: “no other long-term solution” than the vaccine, for the Minister of Agriculture

Although biosecurity measures have been reinforced this year after the wave of 2020, with the sheltering of all poultry since November, the spread of avian flu has accelerated in recent weeks. More precisely since its arrival in the dense production area of ​​the Landes. On Wednesday, the department had nearly 170 farms affected. To avoid the wildfire effect, all the active areas in the south of the Landes, as well as the west of the Gers and the north of Pyrénées-Atlantiques will gradually be “emptiedover the next three weeks. That is to say that all poultry and waterfowl present will be euthanized, for “stabilize the area and put it back into production, we slip into the corridors of the Ministry of Agriculture. If not, don’t put the package now, these are healthy areas that may be affected».

In total, nearly 1.3 million animals could be affected, in addition to the 1.2 already slaughtered since the arrival of the first cases in France at the end of November. “Healthy slaughtered animals that are at the end of breeding can be valued normally», Supports the ministry. But this new blow remains very hard for a sector which seems resigned to the observation that no biosecurity measure seems able to overcome this ultra-contagious virus.

The approximately 14,000 poultry farms in France – including 4,000 foie gras waterfowl (ducks, geese, etc.) – are well compensated for these slaughters and the economic losses they cause. Last year, the sector received at least 100 million euros in health and economic compensation. But the impact of these repeated waves on French poultry production remains significant. Thus in foie gras, production has fallen by 40% since 2015.

Faced with what looks like a health impasse, the sector and the ministry are considering reworking the rules “compliance with biosecurity measuresto ensure their effectiveness. But above all, hitherto put aside by the public authorities, the question of the vaccination of poultry – supported by breeders – is now being considered more seriously. A working group on the subject has been set up at the ministry level. The only drawback of the measure: the risk of seeing certain important outlets close to exports. Some countries indeed refuse vaccinated poultry, for the risk of introduction of the virus that they contain (via healthy vaccinated animals, but carriers).

Algeria at the foot of the wall against Ivory Coast, follow the outcome of group E

Televisions weigh heavily in the environmental footprint of digital in France