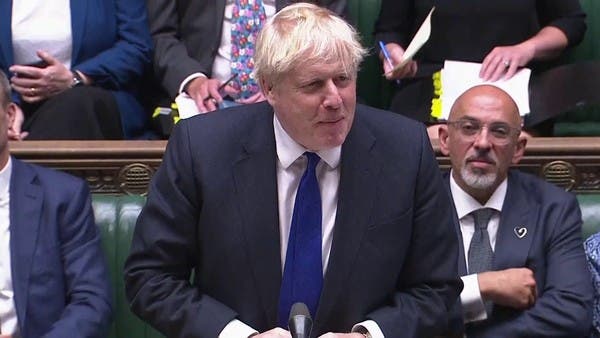 The snowball that rolled on Tuesday with the resignation of two ministers, joined today by 42 other ministers and senior officials in the government of British Prime Minister Boris Johnson to pressure him to resign, the last of whom was Simon Hart, Minister of State for Wales. But Johnson is sticking to his post, and says the war in Ukraine should be the priority, not a new election.

Johnson faced anger in a parliamentary session, using the word “no” three times when asked about the resignation.. Sajid Javid, who started the snowball with his first resignation, stood behind Johnson and said he had had enough.

Johnson said, in Wednesday’s session, that he will not resign, and that the last thing the country needs is an election, despite the many resignations in his government.

“I will not resign and the last thing this country frankly needs is an election,” Johnson told a parliamentary committee when asked to confirm that he would not seek to call an election rather than resign if he lost a vote of confidence.

Al-Arabiya correspondent stated that he may face a vote of no-confidence. In turn, Tom Larkin, a journalist for “Sky” TV news channel, mentioned on Twitter, quoting a member of Parliament as saying that British Prime Minister Johnson could face a vote of no confidence tonight.

Quoting the Member of Parliament, who was a member of the 1922 Committee for Regulating Those Votings, he added that the rules of the Committee, which give
Johnson is currently immune from facing a confidence vote until next year, likely to change, on Wednesday.

Johnson told the weekly questioning session in the British House of Commons that he rejects the abuse of power, and that the government must do its part during crises.

Johnson told lawmakers that the economy was going through a difficult period and that the Russian attack on Ukraine represented Europe’s worst war in 80 years.

He added to the British Parliament: “This is exactly the moment when you expect the government to continue its work, not to withdraw, and to carry out the tasks entrusted to it.”

And MPs from the Conservative Party renewed an attempt to amend the law to raise confidence in Johnson.

Labor also accused Johnson of covering up a government official accused of harassment.

For her part, the British Home Secretary joined the demands for the resignation of Boris Johnson.

Earlier, two new members of the British government announced their resignations. Wednesday, The day after a similar decision taken by the Ministers of Health and Finance, which increases pressure on the Prime Minister, Johnson, who is involved in a series of scandals.

The Secretary of State for Children and Families, Will Quince, announced his resignation, saying he had no other “option” after he “in good faith” transmitted information to the media obtained from the Prime Minister’s Office, which “turned out to be incorrect”.

Laura Trott, in turn, resigned from her position as Assistant Secretary of State for Transportation, because she had lost confidence in the government. According to her.

Also, Victoria Atkins, the British Secretary of State for Prisons in the Ministry of Justice, resigned, and she was joined by the Minister of Industry, who submitted his resignation.

Johnson’s motorcade arrived in the British House of Commons, on Wednesday, for a heated confrontation with MPs, after… Significant resignation of two key ministers in his government.

The Minister of Health and Finance, Sajid Javid and Rishi Sunak, announced their resignations by a few minutes on Tuesday evening, after they were tired of a series of scandals that rocked the government a month ago.

The two ministers sat alongside other conservative deputies in the weekly accountability session, to which the prime minister is subject.

The shocking resignations came after the prime minister offered new apologies for an additional scandal, admitting he had made a “mistake” by appointing Chris Pincher to his government last February as assistant in charge of parliamentary discipline for Conservative MPs.

He resigned last week after he was accused of molesting two men.

The resignation of Rishi Sunak, 42, came in the midst of a cost-of-living crisis in the United Kingdom. In his resignation letter to Johnson, Sunak wrote: “Public opinion rightly expects the government to be led properly, competently and earnestly…I realize this may be my last cabinet position, but I believe these standards are worth striving for and that is why I am resigning.” .

Javid, 52, who took over the finance ministry before Sunak, said the British had a right to expect “integrity from our government”.

He went on to say that the vote of confidence in Johnson in June should have been an opportunity to show “humility” and show “a new direction”.

But he added: “I regret to say that it is clear to me that the situation will not change under your leadership and therefore I have lost faith in you,” referring to Johnson.

Johnson quickly replaced the two resigning ministers, appointing Education Minister Nadim Zahawi to the Finance Ministry and Steve Barclay to the Health Department, who until now had been responsible for coordinating government affairs. But will Johnson succeed in continuing after this latest crisis, while he has so far refused to consider resigning?

Johnson is mainly suffering from the repercussions of the scandal of parties that were held at the government headquarters during the stage of complete closure, during the pandemic, and he escaped weeks before a vote of no confidence decided by his Conservative Party deputies.

In addition, there are other issues of a sexual nature in Parliament. A deputy suspected of rape was arrested and released on bail in mid-June, and another resigned in April, because he watched a pornographic movie in Parliament on his mobile phone, and a former deputy was sentenced in May to 18 months in prison, after being convicted of sexual assault. On a fifteen-year-old.

The exit of the last two deputies led to the organization of legislative by-elections, as a result of which the conservatives suffered a resounding defeat. This came as the party scored very poor results in local elections in May.

The situation raises the discontent of the British, who are facing the highest rate of inflation in forty years with 9.1% in May at an annual rate.

After an unprecedented strike of railway workers at the end of June, unions called for protest movements during the summer, while several professions of lawyers, health care workers and teachers announced or did so.

According to the results of an opinion poll conducted by YouGov, published on Tuesday evening, 69% of British voters believe that Johnson should resign. And 54% of Conservative voters say the prime minister should leave office.

Al-Nasr announces the inclusion of a global deal…and reveals the details! • Sports Observatory

News 24 | An increase of 73% and 852 riyals per family.. The citizen’s account announces the details of the July payment