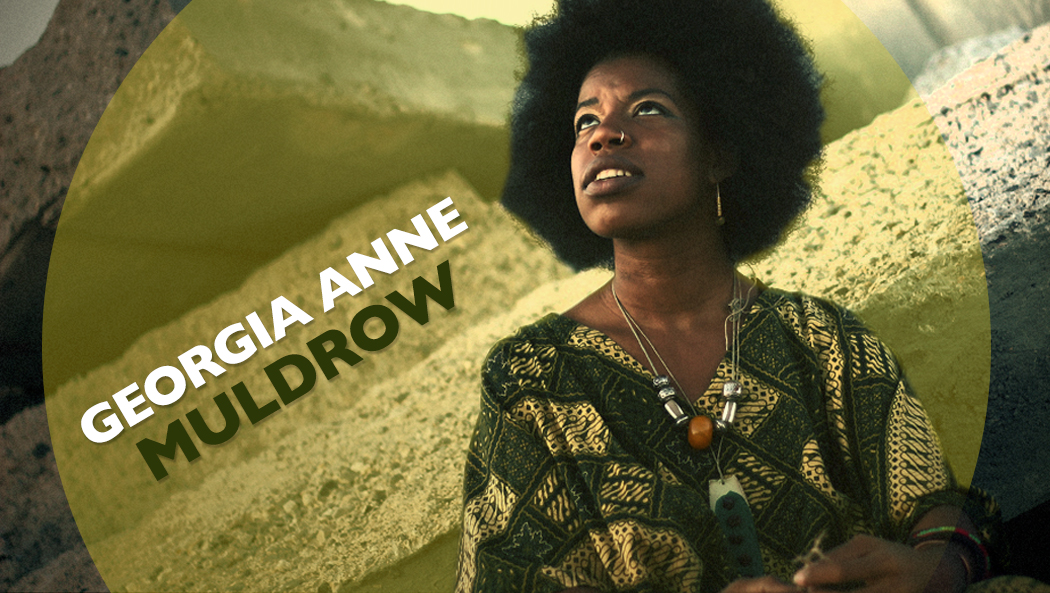 A Thoughtiverse Unmarred. It’s the release of May that you shouldn’t miss on THE indie label of the moment, Mello Music Group. New talent, you will ask me? Well no, not at all. A Thoughtiverse Unmarred is the 16th album of a young Californian thirty-something hyper lookée with the afro cut, with the broad smile, and which already counts more than ten years of career.

Too little known to the general public, Georgia Anne Muldrow yet collaborated with Madlib and Mos Def, nothing less. In an article from New York Times, Yasiin dares to compare with the icons Ella Fitzgerald or Nina Simone: “She’s like religion. It’s heavy, vibrational music. I’ve never heard a human being sing like this. »A hyperactive artist, Georgia knows how to do everything: she sings, composes, produces, makes her own arrangements, draws her album covers, manages her com … And she raps. And rather very well. Inspired by her husband, Dudley Perkins, aka. Declaime, who invites himself for some featurings on A Thoughtiverse Unmarred, Georgia Anne Muldrow matches rhymes like the bracelets adorning her wrists, and slips on beats like the ethnic rings she wears on every finger.

Uncategorized musician, Georgia Anne Muldrow is the daughter of Ronald Muldrow, jazz guitarist and collaborator of saxophonist Eddie Harris. Infused with black music, the Californian enjoys a prestige in the environment that goes beyond the boundaries of the genre. Soul priestess, she is the first woman to sign on the label Stones Throw, with whom she went out in 2006, her first album Olesi: Fragments of An Earth. In the tradition of a Meshell Ndegeocello or a Erykah Badu |, she delivers a work with a nu soul imprint, on which we allow ourselves a beautiful moment of emotion while languid, with the sublime track ” Patience » :

Always innovative and experimental, constantly looking for original sounds, Georgia Anne connects the discs, and successful collaborations, featuring with Bilal on ” More & More » (Owed to Mama Rickie, 2011), or with Mos Def on “ Roses » (The Ecstatic, 2009), to Madlib’s full production of the album Seeds, released in 2012. His music always seems imprinted with a real-proof optimism, a clearly unfeigned musical joy, an ever-renewed artistic jubilation. Georgia Anne has been weaving for ten years a complex, expressive musical web, composed with generosity and ingenuity, and federates around her a circle of warned for whom her music becomes pure addiction.

At the end of spring 2015, the panther of US rap struck a big blow: A Thoughtiverse Unmarred is a soulful little gem of Hip-Hop. So far loyal to Stones Throw, Georgia Anne took a musical turn last year with the release of Ms. One, his last EP, on his own label founded in 2008, SomeOthaShip Connect Records. On five tracks (ten in all with the instrumental versions), she launches officially, and with a crazy talent, in rapped singing. To get an idea, just listen to the ultra-catchy track ” Dollar »To the funk guitar line, it takes your breath away!

Beyond an immeasurable passion for music, Georgia Anne Muldrow is also a speech. Woman of convictions and ideas, she associates, with a lot of depth in her texts, spirituality and political commitment. Social inequalities, black condition, status of women, denunciation of the powerful, pacifism, her positions are those of a humanist artist who transposes her struggles into songs. Switching from singing to rap is therefore a logical step for a fighting woman. The project A Thoughtiverse Unmarred was ready for a long time, he leaves after the riots in Ferguson, after Baltimore… The track « Great Blacks »Sounds like an echo:

Calling for civic awareness, refusing any recourse to violence, Georgia Anne Muldrow is wisdom made woman, both prophet and megaphone. She does not criticize, she pushes to surpass oneself, in a calm spirit, but always conscious and responsible. The observation is frank, without tongue in cheek, as on Obama’s policy in the song “Child Shot”:

America’s a corporation /
President don’t call the shots /
He only one slot at a table that we ain’t ever gonna get an invitation to attend /
No we not /
Guess we raw enough to send a drone to get a child shot.

In the footsteps of great men and women of black identity, from Martin Luther King to Billie Holiday, she distills a message of peace. The new opus is strewn with excerpts of speeches or dialogues, which come to close the tracks and allow to create, by linking them to each other, a thematic unity throughout. Combining a very seventies soul, all in brass, with “vintage” beats, recalling the best moments of the New York boom-bap claiming the nineties (“ The Outcome »), A Thoughtiverse Unmarred is part of the current albums of black artists who question their community on the best way to face together systemic poverty, police violence, the daily discrimination suffered. (We already mentioned this theme in our review of Kendrick Lamar’s latest album, To Pimp A Butterfly).

Powerful album symbol of a powerful work, A Thoughtiverse Unmarred is much more than a step for Georgia Anne Muldrow, it is a successful challenge for a true performer of sound. A woman at ease in her rap, at ease in her singing, at ease in her music. It feels great, it’s the GAM effect, we would have been wrong not to share it with you, right?

And so that you capture the love that Georgia Anne Muldrow has for music, we leave you alone. Nothing better than a beautiful and short live demonstration of all his talent: