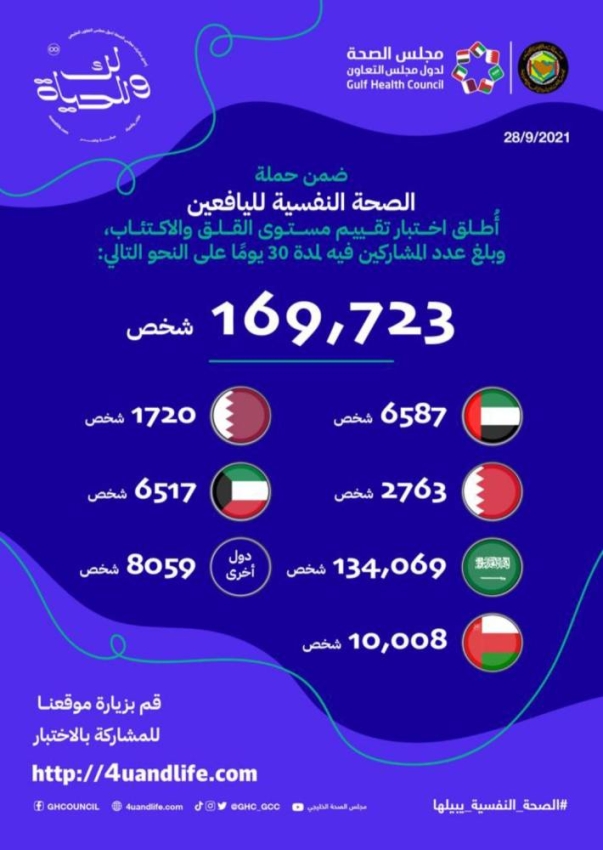 Earlier this month, the Gulf Health Council launched an awareness campaign under the slogan “Mental Health for Young People” and will last for 3 months. More than 169,000 people participated in the campaign test, which was provided free of charge by the Council in all Gulf countries.

Among the results of the tests presented by the Gulf Health Council as part of its “Mental Health for Adolescents” campaign, more than 6,000 people received psychiatric consultations from 21 specialized medical consultants through the Labbeh application, and among those who received consultations were 1,400 adolescents.

It is worth noting that the campaign aims to raise awareness of the causes and symptoms of stress, anxiety and depression in adolescents, and to promote mental health among adolescents in the Gulf countries, as many awareness products have been published through the council’s accounts on all different social media platforms, especially Tik Tok.

The campaign focused on several health issues, including raising adolescents’ awareness of how to deal with stress and psychological symptoms, improving society’s orientation towards mental illnesses and obtaining necessary care, facilitating access to specialized mental health services for adolescents available in the Gulf countries, in addition to supporting parents with effective communication skills with their adolescent children. Providing enabling tools to enhance dealing with stress and psychological symptoms and others.

This campaign comes as a continuation of the efforts of the Gulf Health Council to educate all members of society in the GCC states of the importance of adopting healthy healthy lifestyles based on scientific foundations in order to preserve their health and safety and to prevent them from contracting diseases.