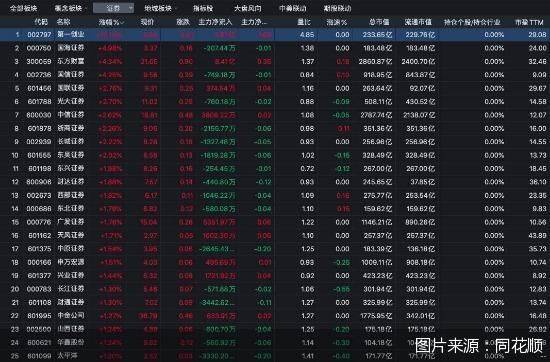 Original title: The performance of the first quarterly report has declined significantly year-on-year, and the leading institutions are also unavoidable. What will happen to the future of the brokerage sector?

With the recent quarterly report entering a period of intensive disclosure, the financial data of the latest quarter of A-share listed securities companies have also been announced one after another. According to statistics from a reporter from Beijing Business Daily, as of April 27, a total of 7 A-share listed securities firms have released their first quarterly reports for 2022. While the overall market performance in the first quarter was poor, the overall performance of listed brokerages was also under obvious pressure. Leading brokerages including Haitong Securities and China Merchants Securities, as well as most institutions, had different levels of net profit attributable to the parent in the latest quarter compared to the same period last year. The decline of 3 institutions also suffered losses in net profit attributable to the parent company. In response to the above situation, many institutions said that it was due to the poor market performance in the first quarter. Looking forward to the second quarter and even the second half of 2022, many industry insiders expressed caution about the future performance of the brokerage sector.

After many days of decline, A shares finally ushered in a “counter-offensive”. Flush data shows that during the morning session on April 27, the three major A-share stock indexes continued to fluctuate and fell, until after midday, the three major stock indexes rose in a straight line. As of the close in the afternoon, the Shanghai Composite Index closed at 2958.28 points, up 2.49%; the Shenzhen Component Index and the ChiNext Index closed up 4.37% and 5.52% respectively.

During the market volatility in the morning, nearly 90% of the stocks in the brokerage sector also fell. Among them, Huaan Securities once fell by the limit; Nanjing Securities, Guoyuan Securities, Hualin Securities and many other stocks also fell by more than 8% in the morning. As the midday market rose, the performance of the brokerage sector also began to pick up. As of the close in the afternoon, the securities company index closed at 639.5 points, up 1.55% in a single day; over the same period, more than 70% of securities companies’ concept stocks closed up; and the first quarterly report was released the day before, and the net profit attributable to the parent achieved a sharp increase. Entrepreneurial securities rose by the limit.

The quarterly report data shows that, except for First Venture Securities, the net profit attributable to the parent company of other securities companies has decreased to varying degrees year-on-year. According to the data, as of the end of the first quarter, First Venture Securities achieved an operating income of 532 million yuan, a year-on-year increase of 46.16%; the net profit attributable to shareholders of the listed company was 71.8929 million yuan, an increase of 421.77% from the previous year’s 13.7787 million yuan. It can be seen that although First Venture Securities stands out among the securities companies and achieved a year-on-year increase in net profit attributable to the parent, it is not unrelated to its relatively small base of net profit for the same period in 2021.

It is worth mentioning that on April 12, CITIC Securities, the “big brother” in the securities business community, also released a first-quarter performance report. According to unaudited data, in the first quarter of 2022, CITIC Securities achieved operating income of 15.216 billion yuan, a year-on-year decrease of 7.2%; net profit attributable to shareholders of the parent company was 5.229 billion yuan, a year-on-year increase of 1.24%.

Guoyuan Securities said in response to the interview with the Beijing Business Daily that the company’s operating income in the first quarter decreased significantly year-on-year, and the net profit attributable to shareholders of the listed company was negative, mainly due to the large adjustment in the securities market, and the company’s self-operated securities investment business. It was caused by large floating losses in equity investment; the revenue and benefits of other business segments of the company were basically the same or increased compared with the same period of last year.

In addition, a reporter from Beijing Business Daily noted that Southwest Securities pointed out in its quarterly report that the year-on-year decline in its revenue and net profit was due to the loss of self-operated business. Huaxi Securities pointed out in the quarterly report that due to the impact of market conditions in the first quarter, financial investment losses and other debt investment impairment losses increased.

On the whole, the performance losses of the above-mentioned securities companies are largely related to the market conditions in the first quarter. China Merchants Securities also mentioned in the quarterly report that in the first quarter of 2022, market volatility has intensified, the epidemic situation is still severe, the company’s operating activities are facing challenges, and the company’s performance is under pressure.

Wang Jianhui, a securities business veteran, further mentioned that with the continued downturn in the stock market, market-oriented products and businesses such as asset management business, brokerage business and even investment banking business will be affected to a certain extent, resulting in a year-on-year decline in the performance of securities companies. Case.

Guoyuan Securities said in an interview with a reporter from Beijing Business Daily that the company’s first-quarter losses were staged. There are many positive factors for the company’s development, the asset-liability structure is more reasonable, and the leverage ratio has increased. In the later stage, it will increase the asset allocation of fixed income business, expand the scale of active management of asset management, and actively seek business income opportunities such as investment banking and OTC. Full confidence in the completion of the full-year target.

However, some people in the industry are cautious about the follow-up development trend of the brokerage sector. Wang Jianhui believes that due to the recurrence of the epidemic and the exposure of negative factors, the market may maintain a cautious attitude before the disclosure of the second quarter results. If there are changes in the epidemic prevention policy and the international situation during the second quarter, the expected development of the brokerage sector is expected to improve first, otherwise it may continue to be sluggish.

Gui Haoming bluntly stated that the downturn in the securities business sector may be difficult to change in 2022. From a short-term perspective, securities stocks will be weaker than the broader market even if there is a market trend. Therefore, it is not recommended to use securities stocks as a key allocation target in 2022. .

Specifications of my “Moto G62” and “G82” phone from Motorola