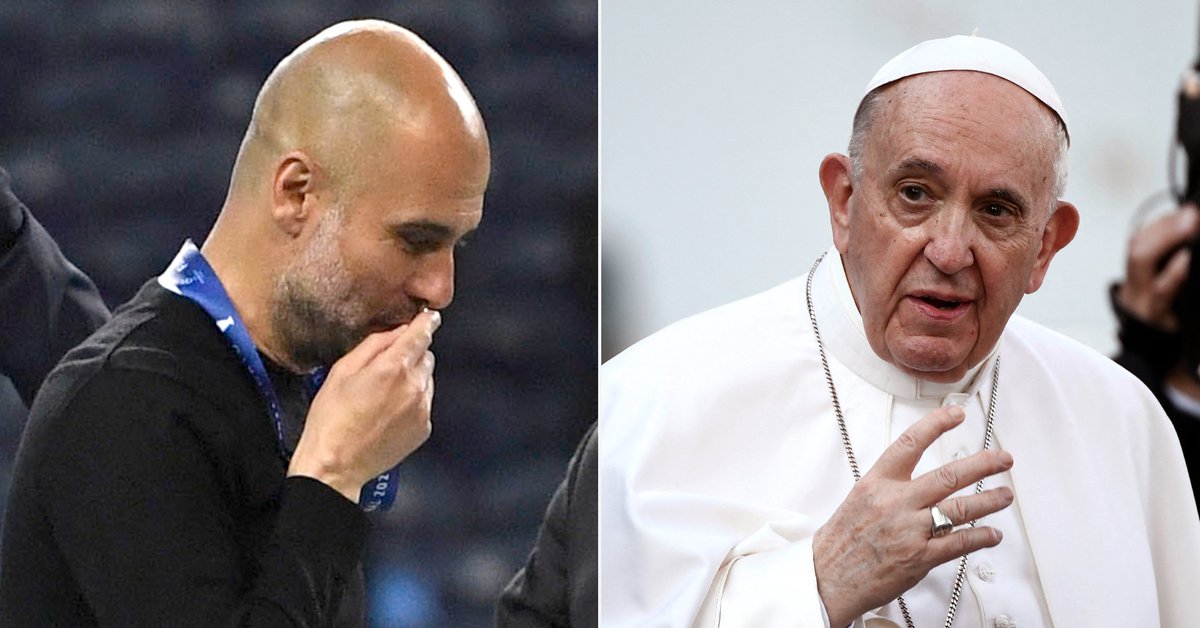 Guardiola kissed the medal to the runner-up and the Pope recognized him.

The image of the last Saturday of Pep Guardiola kissing the runner-up medal of the Champions League after to lose 1-0 with the Chelsea generated controversy and praise. Among the latter, the Pope Francisco, who highlighted the gesture of the coach of the Manchester City by stating that “even in defeat there can be victory.”

“They have told me these days about one who finished second, I don’t know where … There was a winner and one who came second. It’s normal that when you finish second, you pout, you are sad and I am not saying you get to throw the medal, but you want to do it. Instead, he has kissed the medal”, Said the Supreme Pontiff in clear reference to Guardiola. His words were when he received the Italian Basketball Federation in the Vatican.

The Pope used the example of Guardiola to exalt values ​​beyond a fall. To be able to take what happened as learning and how the athlete is enriched in those instances despite the regret and frustration of not having been able to achieve a goal, which can become the pinnacle of a project like the one Pep carried out in the English team .

“This teaches us that even in defeat there can be victory. Take defeat maturely, this makes you grow. It makes you understand that in life there are not only sweet moments. When an athlete faces defeat with this dignity, it is an honor”He added.

The controversy arose among those who called the Spanish coach a demagogue or if he really wanted to give a message not to dramatize in defeat, beyond the pain after a fall at the highest level. Although the truth was that on Saturday after the meeting, Guardiola received the medal and immediately kissed it. The image traveled the world, even reached the ears of the Pope.

Pep Guardiola led Manchester City to their first Champions League final, but failed to win it with the English club (REUTERS / Pierre-Philippe Marcou).

Francisco is a lover of soccer and a recognized fan of San Lorenzo, since his days as Archbishop of Buenos Aires, when he was still called by name, Jorge Bergoglio. He is usually aware of the round and received in the Vatican several top-level players or figures who have already hung their boots, among them the remembered Diego Armando Maradona. Also stars from different disciplines.

Regarding more general values ​​of sport, the Pope invited basketball players to persevere in two fundamental keys for every athlete, such as teamwork and discipline that does not make them “rigid” but “responsible.”

In his speech, Francisco delved into the relationship between the Church and the world of sport, pointing out that this bond was always “cultivated with the awareness that both, in different ways, are at the service of the integral growth of the person and can offer a precious contribution to our society ”.

In this sense, he stated that sport “it’s a medicine for individualism of societies that often generate an ‘isolated and sad self’, with an inability to play as a team and cultivate a passion for some good ideal ”. Finally, he promoted the players to take care of the spiritual life: “It cannot be left only in the hands of the emotions, nor can it be lived in alternate phases, only when it feels like, since it also needs an inner discipline made of fidelity, perseverance and daily commitment to the sentence. Without constant inner training, faith runs the risk of being extinguished ”, he assured.

Kun Agüero signed with Barcelona and will be Lionel Messi teammates
10 phrases from Kun Agüero as Barcelona’s new reinforcement: Messi’s message, what he spoke with Guardiola and his dream fulfilled