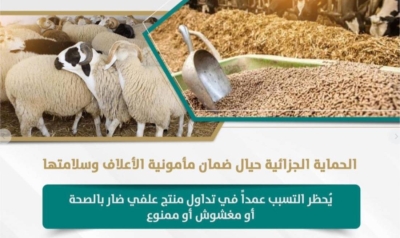 Al-Marsad newspaper: The Public Prosecution Office warned, through its account on the social networking program Instagram (ppgovsa), against deliberately causing the circulation of a harmful, adulterated or prohibited feed product, which carries a penalty of up to ten years in prison, and a fine of no less than one million riyals, and up to ten million riyals, in addition to prohibiting the practice of any work related to feed, for a period not exceeding one hundred and eighty days, canceling the license, and publishing the judgment at the expense of the convict. This is in accordance with Article 32 of the Feed System issued by Royal Decree No. (M/60) dated 9/23/1435 AH.

The Public Prosecution, in its role in the investigation and public prosecution in the aforementioned violation, stressed that the feed prepared for animal feeding must be safe and sound, in order to preserve animal health and public health, and the harmful effects that may result from that on human health.

The most difficult stage in the club’s history