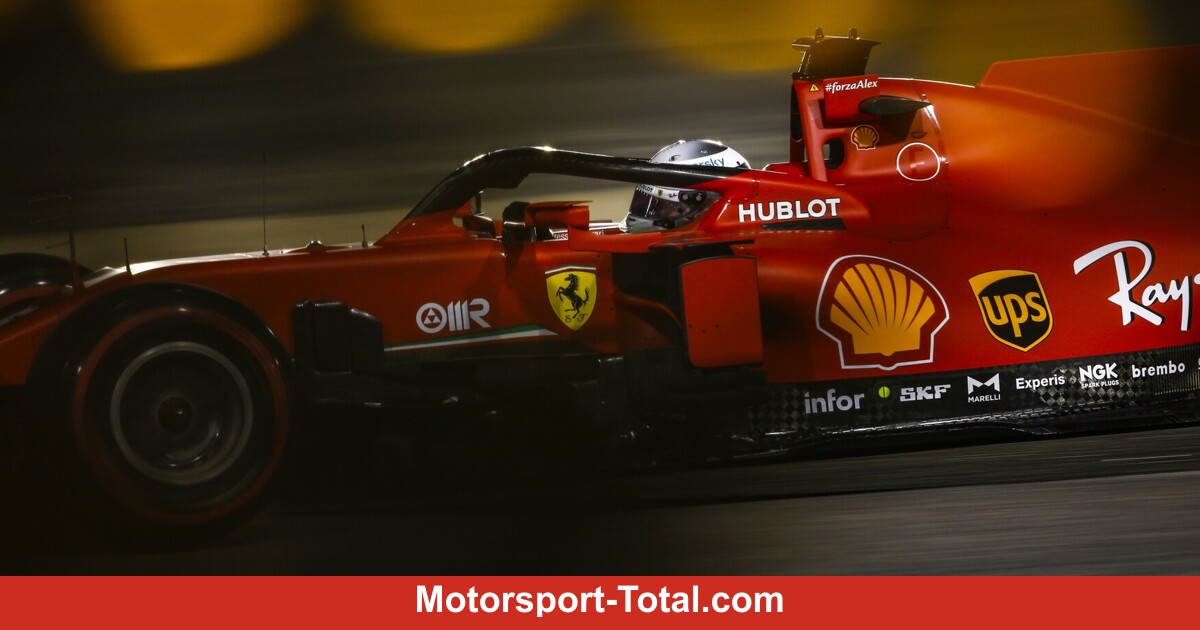 That’s all for today!

With that we have reached the end of today’s ticker. The race starts tomorrow at 3:10 p.m. our time, and we will be back at the start with a new ticker from noon to get you in the right mood for the Grand Prix. But it’s over for today. Have a nice evening, sleep well and see you tomorrow!

Something else for all fans of statistics: Ferrari was 1.3 seconds slower in qualifying today than it was a year ago. At that time Leclerc was on pole with a 1: 27.8, today he and Vettel both drove a 1: 29.1. This crash is already severe. Especially in comparison with the competition, because pole sitter Hamilton was 0.9 seconds faster (!) Than 2019, for example, Verstappen was even 1.1 seconds. Brutal for the Scuderia …

Verstappen: advantage at the start?

For a change, it’s not about the tires, because everyone in the front starts on the same tires this time. However, the Dutchman is pleased that he will start tomorrow in P3 from the “clean” side of the grid. That could be an advantage in the fight against Bottas, because the Finn is on the dirty side on P2. In addition, Bottas did not have a perfect start this year …

Ferrari: tire advantage in the race?

Sports director Laurent Mekies explains: “Our approach was very race-focused. We saved two sets of the hard tires. […] We’ll see if we need them tomorrow and whether it will pay off. “He also believes that tomorrow you will have the pace to ride in the big group behind the front.” I am not saying that we are faster, “he said Mekies: But if you can at least keep up, then something could go beyond strategy.

The Frenchman has been with Haas since the team’s first Formula 1 race. Now his time there ends at a point in time when the team is at the back of the field. “It’s not ideal, and it also makes me a little sad,” admits Grosjean, explaining: “I’ve invested a lot in this project.”

It feels as if the team’s successes, for example finishing fifth in Bahrain, were “ages ago”. Regarding the team itself, he explains: “I think they deserve more. But that’s what we have. And miracles are not possible.” Somehow a sad farewell indeed.

Ocon: Just no luck against Ricciardo …

The Australian leads the internal qualifying duel 14: 1. Only in the rain in Spielberg did Ocon once come out on top. It was often close – as it is today. This time, Ocon was only 0.002 seconds short of their teammates. Not the first time that less than a tenth made the difference at the end of qualifying.

“He’s had a very strong year, he was faster than me for most of the season,” admits Ocon. But Ricciardo was also lucky. “When it was tight, it always ran in his direction”, the Frenchman shrugs his shoulders and explains: “In the next two [Qualifyings] it’s up to me to change that. “

At the same time his last two chances, because after that Ricciardo changes to McLaren.

… is here again in the video. The world champion himself reveals: “You can always improve and improve a bit, but it was a very clean lap today. I don’t know exactly why, but I had a good feeling here the entire weekend. I just wanted to today just having fun, that’s the most important thing for me. “

It doesn’t work with a stop

Everyone seems to be in agreement on this at least. Even “tire whisperer” Sergio Perez replied to the question of whether you could make a stop tomorrow: “No, not here. I think we will see between two and three stops tomorrow. It will be a long race.” Still, I wouldn’t be surprised if one or the other tried. Especially since, according to Pirelli, the medium-hard variant is supposed to work …

Tomorrow at the start we will have the very unusual situation that none of the top 10 drivers will start the race on soft tires. All ten drivers start on the medium, behind which there is a free choice of tires. But is this “choice” really that big? Because nobody really wants to start on the softs. So the only real alternative remained the hard tires. And they are actually a disadvantage at the start. Will be exciting!

Sainz: Just no luck in Bahrain …

On Thursday in the press conference it was, among other things, that Carlos Sainz simply has no luck in his career in Bahrain. He has never scored there. He was eliminated in his first three races for Toro Rosso between 2015 and 2017, and in 2018 and 2019 he missed the points with McLaren. And at the sixth attempt this year it doesn’t seem to be going any better …

Stroll only starts from P13, Perez starts from P5. That made him “Best of the Rest” behind Mercedes and Red Bull today. That is also important in the battle for third place in the World Cup. Racing Point (154 points) is currently leading in front of McLaren (149), Renault (136) and Ferrari (130). As a reminder: The McLarens will only come from P9 and P15 tomorrow, the Ferraris from P11 and P12.

A chance for Renault, where Ricciardo and Ocon start right behind Perez. “His long runs were good and he has always been a master at handling the tires correctly. We have to put real pressure on him and maybe try to take him off guard at the start so that he can’t just follow through with his strategy,” he said Ricciardo.

“If he has a clear run, I think he will be difficult to beat,” said the Australian.

Stroll: That’s why he was eliminated in Q2

We wondered what was going on with the Canadian in Q2. Now he provides the explanation: “After the red flag there was a misunderstanding that robbed us of a potential place in Q3. We went out on used medium while the rest of the field had new tires. So we had no more chance to come in Q3. “

One wants to discuss the situation in the evening and “learn” from it. Regarding the race, he explains: “The positive thing is that we have a free choice of tires in 13th position. You can overtake here, and strategy is important. So we can move forward. We can target points, and with the I’m happy with the pace of the car. “

See Also:  Football: Barça can dream of the title more than ever
6:44 pm

No Ferrari in the top 10

In Bahrain, the weakness of the Ferrari engine is apparently coming to the fore again this year. None of the six Ferrari drivers made it into Q3 today, and the four customer cars even finished Q1. In the top 10 were three Mercedes, three Renault and even all four Honda cars. That doesn’t give much hope for the race, but let’s see what else is possible for Vettel and Co.

No meeting between Verstappen and Wolff

Colleague Chris Medland caused a stir on Twitter today when he claimed he saw Toto Wolff talking to Jos Verstappen in the paddock. But that’s not true at all! “My father is sitting on the couch and takes care of my little brother. Maybe he can teleport himself?”, Max has meanwhile answered with a grin.

Medland apologized for the confusion but continued to say, “I swear this person looked just like him!” This is how rumors can arise. At least we now know that Jos Verstappen seems to have a doppelganger in the paddock 😉

What role will Albon play tomorrow?

P4 is a good starting position. But it would be even more important to hold this position in order to finally be able to help Verstappen against Hamilton and Bottas. “P4 is great. Hopefully we can use it to disrupt the Mercedes strategy,” says Albon aggressively and reveals that this placement did not come as a surprise to him.

“The first practice session was pretty good, as was the third practice session. P4 didn’t seem unrealistic there. I thought that was possible before qualifying. Of course it was nice to get the result. The car feels good this weekend . Especially today it clicked again, “said Albon.

Sainz: It was the brake

Now we finally have confirmation from McLaren. The Sainz car did indeed have a brake problem at the rear. That’s why the car broke out so strangely at Turn 1. The good news is that it should be possible to fix the problem without incurring a penalty. For example, if you had to change the gearbox, there would have been a starting place penalty. So he can at least keep starting position 15 tomorrow.