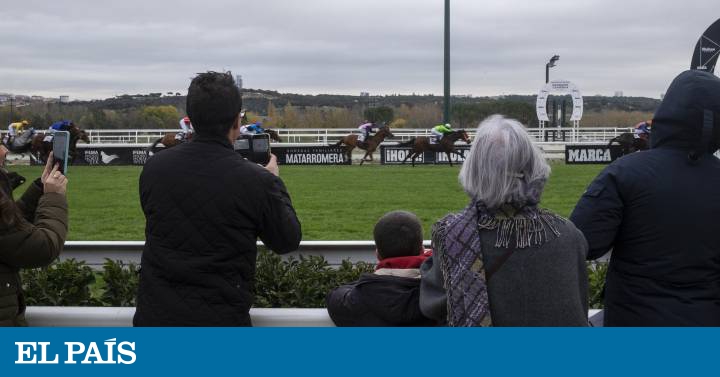 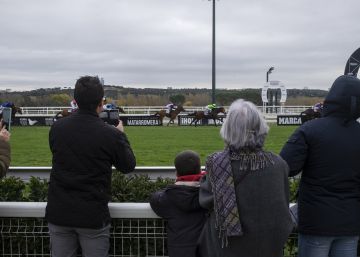 Rubén Maroto gets off the horse with his face muddy and his suit soaked. “We are subscribed to second place,” he laments after having entered the goal a few inches behind the winner. At that same moment, in front of a monitor, a man mutters: “Very good, Marotito, Congratulations!”, While squeezing the program with the races of the day. Tension intensifies in the stands, where a thousand people follow the jockey’s set. They have come to spend a day of bets, reeds and snacks at the Hipódromo de la Zarzuela.

Many do it for the first time, among veterans who wear binoculars, pen and notebook. This public space, which closed almost a decade between 1996 and 2005, is trying to attract fans with an offer that transcends the track: ‘food trucks’, ‘brunch’, ‘shows’ and an arsenal of modern vocabulary to engage with what they call ‘The flat’. They offer plans on Saturday nights and Sunday mornings in their 15,000 square meters. Among the attendees, many families. There is a leisure offer for children and the entrance of children is free.

“It is a mixture of the reeds of the center and the walk through the Casa de Campo, ideal for young people and families,” describes Victoria Barderas, director of communication and marketing of the institution. He points out that the main activity is not bets, included in the Law of the game corresponding to the Community of Madrid.Although they do not allow minors to participate and warnings that, as a game of chance, it can cause addiction, the majority of attendees try their luck. They are labeled “easy and fun” and nowhere is identification required, the entry to ludopaths is prohibited on the premises, as dictated by current regulations. Barderas argues that there are no problems of gambling because it is a “white bet, to live the emotion of the race ”and tells that from next year some restricted areas will be inaugurated,“ with a request for a password ”.

See Also:  "At the national level, the commitment of a participatory budget mechanism remains to be imagined"

Barderas argues that the claim is not the bet, but “leisure and entertainment.” If it rains or the temperature drops, the influx suffers. Usually, they register 5,000 people per day. In autumn, however, the capacity drops. There are few days left before the end of the season to close and reopen in spring, August of the Hippodrome. The site resented the period that was closed and “the lack of custom of the races,” says the head. When it reopened, in addition, the Hippodrome has had to deal with social concern about the rise of bookmakers and the problems associated with gambling.

Despite this, every Sunday they invoice about 200,000 euros. The achievement of the Racecourse has been to expand to groups that were leaving the usual orbit of space, making an effort to overcome that halo of exclusivity – something rancid – that exhaled. “Tickets are free until 18 years and then at seven euros. Bets can be from one euro. In addition, you have a gastronomic offer of all kinds, from the buffet of 35 euros to the stalls outside, “says Banderas. It also highlights the architectural value of the work, a key piece of twentieth-century architecture and engineering, projected in 1934 by Arniches, Domínguez and Torroja In 2009 it was declared of Cultural Interest and after the rehabilitation of 2004, carried out by Jerónimo Junquera, whose study won the contest, the work was awarded the first Prize 2012 of the College of Architects of Madrid (COAM ).

Although the races start at 10.00 and end at 14.30 -in thirty-minute intervals-, the racecourse stays are a carousel of professionals, amateurs and curious who swirl in the premises early. Before getting on the track, riders go to the weigh-in and breeders walk with the horses. The movement is perceived as soon as the English thoroughbred, the only race that competes for their physical attributes. Groups arrive with glasses in hand and families settle on the railings. “It’s our first time. We take something and bet a little,” five students say on the edge of the thirties. They have been “favorably” surprised by the atmosphere: “It is not as elitist as we imagined.” “The idea is to have a snack, hang out. They come for the fun, not for the horse,” says Ignacio Ramírez in a van that dispatches squid sandwiches (seven euros; rations, eight). “In the cold days the usual ones come, but if there is a concert or if it is good this is full,” says this street vendor, who lived 10 of his 49 years in Australia and knows what a show like this: “There were 80,000 people and It’s a national holiday, “he recalls.

“We have no idea how to play, but it’s great,” four employees of a computer store between 22 and 25 years old agree. “It used to be considered a hobby of wealthy people, but now there are parks, children’s mats and many private events,” says Mari Carmen, a 26-year-old box office clerk. She attends behind a window and advises inexperienced people. “I recommend simple bets.” , he says with a chip in which the different types of game are shown, whose price and winning amount depend on the number and position in which the horses end.

The competition is ending and empty bottles rest in the canteen or in the bar of the outdoor bar. The primers dissolve in a damp floor and the televisions of different rooms do not stop focusing on the grass. In the Hipódromo de la Zarzuela there are 33 permanent people and about 130 discontinuous people, on race days, according to Barderas. In addition, the open days are reached 300 positions between security, catering, waiters, veterinarians or cleaning staff. Luis Miguel Fernández, 49, is one of the regulars. Openwork beret, tight jacket and tie, study each rider, horse and stable. “It is a fairly complex sport, but accessible to everyone. What happens is that it has been left with the image of something stately,” he concedes while reading the amount of the jackpot (27,000 euros) and see how Maroto, for whom he had bet, returns home with a second place.