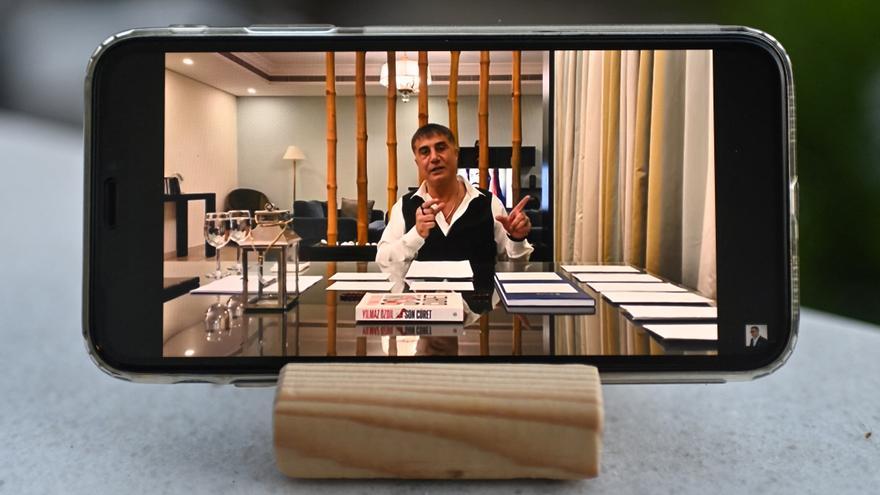 Black vest matching a White shirt with the fists up to the wrists. A very thick ring on one of the fingers. Short hair covering half the forehead and here we go, 3, 2, 1 and image: “My precious brothers! My valued friends! Hello again, here we are again, as promised. Like I always say, honor is in the word”.

This is how they start all videos, just under a dozen, of the new Turkish internet sensation and superstar. The protagonists of them is not a young man who dances, or who plays video games, or who hangs out with his friends, or who makes extravagant challenges or who talks with other Internet users. The man in the black vest and white shirt is called Sedat Peker and it is, neither more nor less, that a leader of the Turkish mafia.

Peker has been in exile outside Turkey for a couple of years and this May he went on the attack from a hotel in Dubai. It all started at the beginning of the month, when the police raided their home in Turkey, where they still live. his wife and daughter.

The mafia boss exploded and began his route as a youtuber, a practice he has used to reveal his ties to him Turkish Interior Minister Süleyman Soylu, which he helped to extort rivals and consolidate his power, he says. But Peker has gone further: each video contains new revelations, such as those linking other high-ranking government officials with the cocaine trafficking from Venezuela and Colombia, with the murder of journalists in the past or with violations, among other complaints. His videos have an average of about eight million views, and the Turks, who do not speak of anything else, are waiting for the weekend to arrive to be able to see the next one.

But if Peker attacks someone with special belligerence and I hate, this is undoubtedly Soylu. “I’ll put a neck brace on you and take you walking like a dog. You will walk like a dog by my side ”, he tells her in one of the videos.

“Soylu was one of the favorites to replace Erdogan when he retires, but this may have wiped out all his options. Considering that he is losing his credibility in front of the public opinion very quickly, I think it will be very difficult for him to continue his political career in a post-Erdogan Turkey, “he says. Berk Esen, professor at Sabanci University.

“This is a economic attack against Turkey. They want to destroy the Turkish economy and disarm it. I am not the target of all this. It’s turkeySoylu said this week in an interview on television. ‘Haberturk’. The interior minister is the only one who has come out in his own defense. Erdogan and the others have generally remained on the sidelines.

But why? Why is it that in a country like Turkey, where there are hundreds of closed Twitter and YouTube accounts, are Capo Peker’s still active? The answer, according to experts, lies within the government itself. “Although Erdogan and his allies supported Soylu at first, they realized the intentions of the minister to replace Erdogan as president. And their plans have been exposed. Furthermore, Erdogan seems to consider that weaken image and autonomy of Soylu could benefit him ”, he considers Nezih Onur Kuru, political scientist of the Koç University.

“I would summarize it like this: Erdogan is a man who is in a little boat and there is a swell. Then, he gets up and shakes the boat so that the other one on board falls down and he is the only one on top. The risk is clear: let them both fall, ”says Esen. “We are in absolutely unknown territoryEven in Turkish politics, where we have seen everything, “he adds.” We have never before had a mobster using videos on the internet to attack a minister. “

And in the meantime, Peker goes about his business, posting more videos and promising more revelations, from his hotel in Dubai, in his black vest and white shirt. “Süleyman! It’s you, you’re the gangster boss. If you were an honorable man, you would talk about your project to be president. But you know what? I’ve ruined that project of yours, ”says Peker in his latest video.