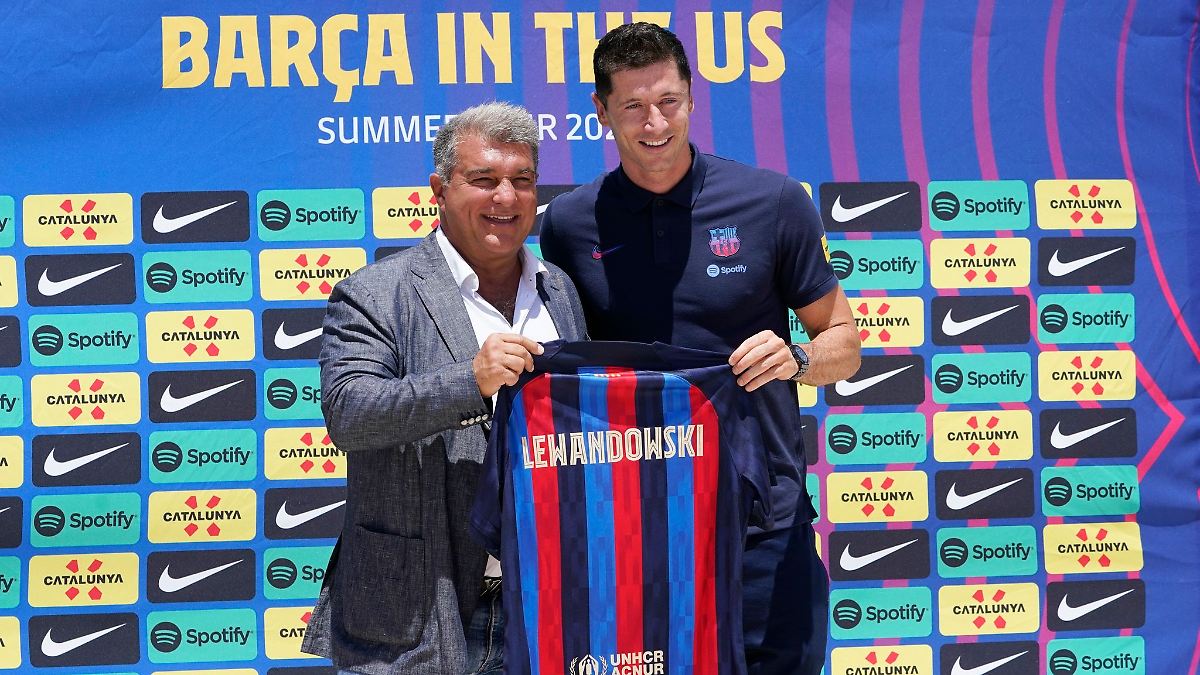 FC Barcelona, ​​which is in debt with more than one billion euros, behaves as a transfer croesus. Not only Julian Nagelsmann is surprised. It’s a high-risk game for the Catalans with a lot of uncertainties. In the club, they seem to be able to hide it all well.

No, you have to be honest with FC Barcelona, ​​a transfer, a homecoming of the iconic beloved Lionel Messi is really not possible this summer. The times of unlimited possibilities, soft coughing, are also over for the Catalan giant. In view of the 1.35 billion euros in debt, the bosses of the traditional club paint a very realistic picture. However, this picture does not really want to fit into the series of works of art that FC Barcelona is currently collecting. Because the football world is amazed at the behavior of this club, which shouldn’t even be able to afford a roll of toilet paper anymore.

But what does the Catalan oak tree care if the bankrupt vultures scratch it? The answer is surprisingly uncomplicated. Namely nothing. FC Barcelona, ​​who not only cried because of Lionel Messi last summer, but was also extremely concerned about himself, is knocking out the big euros this summer like a wild speculator youth. The latest outgrowth of this wild “throw-your-fuffies-through-the-club” mentality: the transfer of central defender Jules Koundé. The French international comes from FC Sevilla for a fee of 50 million euros – plus ten million in possible bonus payments.

The self-image of a giant

Koundé is the third big deal this summer, costing the Catalans a hefty fee. The club had previously adorned themselves with longing transfer Robert Lewandowski and winger Raphinha. There are also top players Franck Kessié (AC Milan, midfield) and Andreas Christensen (Chelsea, central defence) who are both free transfers. After years of starvation, the club is building its squad to attack the European elite again. So to speak, to fill your own giant self-image with life and wonderful football. Only the coach’s reputation promises that. Xavi was once the mastermind of the legendary Tiki-Taka troupe that either fascinated or frustrated the continent with their crushing passing game.

In fact, Barça put together a team that fires the imagination. Experienced players as pillars, outstanding talents like Ansu Fati, Pedri, Gavi and Nico as gigantic promises for the future. And in between there is a generation of highly gifted people who are fighting for their lasting breakthrough. Like Ousmane Dembélé or Frenkie de Jong. A strange story had recently been told about the Dutchman, which fits in with the club’s peculiar behavior in recent weeks. Actually, the 25-year-old should be sold, but he didn’t want that. Now Xavi is planning with him. If the player is willing to give up half of his salary. He is said to earn around 30 million euros.

It’s a curious story that caused uncomprehending reactions in the football world. Former England international Gary Neville wrote on Twitter that de Jong should take legal action against his club. “A club that spends a fortune on new players while not paying in full those they have under contract is immoral and against the law.” One actually wonders: what’s going on with the Catalans? There seems to be plenty of money for newcomers, but is it getting tight when it comes to salaries? Now it is actually the case that the club has offered crazy contracts in recent years to win players for a new era. This poker didn’t work out. On the contrary, the mountain of debt cracked the billion mark. How is this ever going to be redeemed? Probably no one has an answer to that.

Calculation with many risks

In any case, the approach is as follows: The turnover, according to the cool calculation, should soon rise back to the time before Corona and Barça should be the first club to break the magic billion sound barrier. In order to save the club from ruin – President Joan Laporta admitted in June that the “patient, financially speaking, is practically dead” – and at the same time make the team more competitive again, CFO Eduard Romeu pawned the club’s silverware. US investor Sixth Street will pay 207.5 million euros for ten percent of the income from the league TV rights over the next 25 years. Another 15 percent should bring in over 300 million euros, 49.99 percent of “Barça Licensing & Merchandising” also bring in 200 to 300 million euros.

At the same time, Laporta is using daring financial models to save on salaries: old icons such as Sergio Busquets or Gerard Piqué agreed to cuts, new stars initially earn comparatively little, but all the more in the second or third year of the contract. These tricks are designed to comply with the league’s financial rules, according to which Barcelona are only allowed to spend 33 cents for every euro saved or earned. Still, all the new players haven’t even been allowed to be registered with La Liga yet. The football financial blog “Swiss Ramble” writes of a game with fire, the Catalans have “learned very little from past mistakes” – and are therefore looking to the future: to the Super League as the solution to all problems. The Reichenliga lures with a welcome bonus of 270 million euros.

It’s a construct that the football world is puzzled by. Bayern coach Julian Nagelsmann put it the most briskly: “It’s the only club in the world that has no money but buys any player he wants. It’s kind of weird, kind of crazy,” he said. CEO Oliver Kahn had then warned that nobody could really judge the internals. “None of us can judge that from a distance. I find it a bit difficult to make judgments. They’ll know what they’re doing.”

Tepha Loza is shown in a wheelchair and sends Sergio Peña a tremendous missile: “If they don’t love you like that… it’s not there” | Instagram | entertainment | SHOWS

General Secondary School 2022.. Announcing the result without withholding from those who are late in paying the expenses