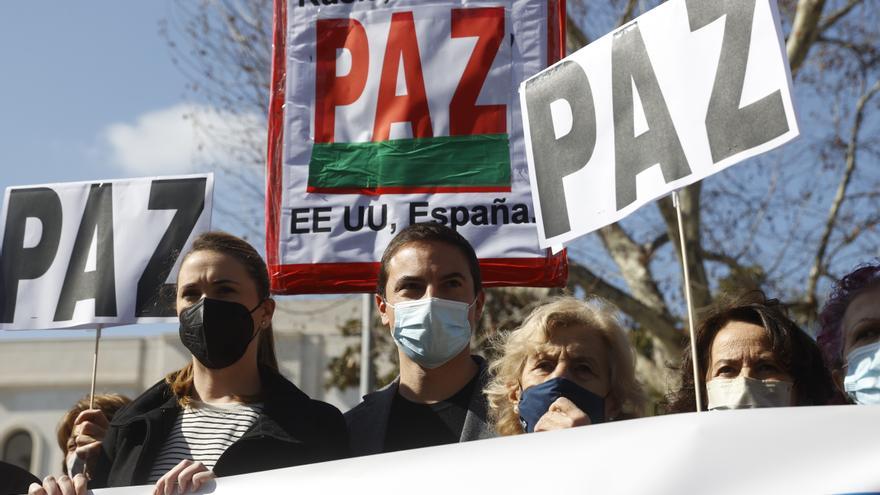 While intensifying the offensive in Ukraine, while the West increases its sanctions, Russia redoubles its propaganda action to defend its attack on a people it considers a brother. The Russian Embassy in Spain is another producer of arguments in favor of the regime and against a “genocide“Ukraine. Just take a look at your Twitter timeline. Your desire is to emphasize that Moscow has been too “patient”, because he has not responded for eight years to what he describes as Ukrainian provocations. That is to say, that the aggression has been inevitable, that there was no other way. False arguments, as underlined by the European Commission, which this Sunday proposed to ban television broadcasts in the Old Continent Russia Today and Satellite TV and its affiliates, to curb the “Kremlin media machine”.

The best summary of Vladimir Putin’s propaganda is exemplified by a video by the creators of the podcast ‘Russian Spies’ (@laruedadata), which the Embassy in Madrid retweeted this Sunday and which supports the thesis that it is Moscow that defends itself, not the attack. “Do you really think that the leadership of the Russian state is celebrating for having opted for military action? That they did it for imperialist ambitions of Russia?” begins the video, which shows journalist Jelena Milincic, a Serbian who survived the NATO bombing in 1999, speaking to the camera.

The EU recalls, through its EUvsDisinfo project, that none of the many reports on the human rights situation in Ukraine refer to any genocide

Milincic responds by emphasizing that Russia has been “patient”, because Moscow “insisted and insisted” that Ukraine respect the Minsk agreements “that Kiev refused to comply with”, and had “a lot of patience”, he continues, “while the Ukrainians Russians were killed in the neighboring country“. It refers to the alleged “genocide”, ‘casus belli’ for Putin, committed by Kiev in the breakaway Ukrainian territories of Donetsk and Lugansk, whose independence was recognized by the Russian president this week.

However, as the EUvsDisinfo project, a team of the EU External Action Service specialized in detecting and responding to the Kremlin’s disinformation campaigns, points out, “none of the many reports on the human rights situation in Ukraine, which regularly published by the United Nations High Commissioner for Human Rights”, as well as OSCE reports, make “reference” some to a genocide in the Ukraine.

Amnesty International did note that both the Kiev authorities and Moscow-backed separatists in Donbas held civilians “in arbitrary and prolonged detention, without contact with the outside world.” In some cases, the arrests were “forced disappearences“, and most of the detainees “they suffered torture or other forms of mistreatment.” The organization’s report, from July 2016, details the cases that occurred in that year and in the previous year. But there is no mention of genocide either.

“The balance of forces in the world, after last February 24, will never be the same,” says the video, evidencing Putin’s intention to give birth to a new order

Milincic also reproduces the Kremlin’s thesis that in Ukraine “more and more nazi movementswho did everything possible to kill the Soviet past in common”. “They destroyed monuments, historical symbols and even forbade speaking in Russian”. Putin, in fact, justified the attack on the need to “denazify” the neighboring country. The narrative dates back to the participation of violent far-right groups in the Maidan mobilizations of 2014. But the current president of Ukraine, Volodymyr Zelensky, a comedian by profession, is speaker and son of Jews, and his party, Servant of the People, is centrist.

The West, according to the ‘Russian Spies’ video, has been “for a long time trying in every way to provoke Russia into attacking Ukraine” and has been writing for “months” of the “imminent attack“. And meanwhile, he continues, Ukraine “continued to bomb Donbas day after day, feeling powerful”. So it is not “surprised” that Moscow “reacts”. Milincic also recovers the argument that NATO “promised not to expand and He did it without hesitation” and is getting “closer” to the Russian borders. “It’s time to say enough“, the recording points out, to justify Putin’s attack last Thursday, to “put a stop to NATO and its imperial arrogance.” “The balance of forces in the world, after last February 24, will never be the same”, The video concludes, showing that Russia intends to give birth to a new order and recompose its sphere of influence.

The tweets from the Russian Embassy in Spain cover the Argument exhibited in the recordingand promote hashtags #YoConRussia #StopNaziUcrania or #StandWithRussia. The messages from the diplomatic legation also review US military interventions since World War II, replicate the support provided by China, describe the invasion as a “special military operation” (as Putin called it) and reproduce the statements of the Russian president and his Cabinet.

“These measures also have a cost. We must be willing to pay it. Because if we do not pay the cost of containing Russia, we will pay a higher cost later,” said Josep Borrell about the application of sanctions.#WarUkraineRTVE

The arguments used by Moscow and multiplied through its platforms are “garbage information”, as defined by the high representative of the EU this Sunday on TVE Newscast 2. That is why the president of the Community Executive, Ursula von der Leyen, proposed to ban the broadcasts in Europe of Russia Today and Sputnik so that the Russian state media and their subsidiaries cannot “spread their lies to justify Putin’s war and to sow division in our Union”.

Youth Hope Savings Savings, which was expected to have 380,000 subscribers, approaching 2 million… The 5 sub system will be lifted from today