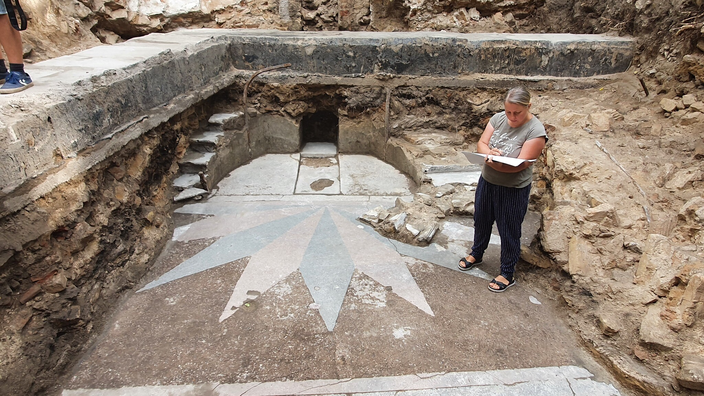 ARCHEOLOGY – Built in the XVIIe century, the former place of worship was one of the most important Jewish intellectual centers in Europe. Looted by the Nazis during World War II, it has been searched for six years by an international mission.

The Holy of Holies of the Great Synagogue of Vilnius – the “North Jerusalem” – sees the light of day again. Almost 80 years after being looted by Nazi forces in WWII, the heart of one of Europe’s most important Jewish places of worship has handed archaeologists the tip of a small yad, discovered among the remains unearthed in recent weeks in the Lithuanian capital. The pointer used to read the Torah is one of the few objects that survived the destruction and looting of the synagogue by German troops, and then its final demolition by Soviet workers.

Made up of Lithuanian, Israeli and American specialists, the archaeological mission has been meticulously revealing, over the past six summers, the outlines and the center of the old monumental building in Vilnius. Guided by geophysical surveys and ancient plans of the Shulhoyf – the center of the Jewish quarter where the synagogue was located – the researchers unearthed the remains of the double staircase that surrounded the bimah – the chair of the officiant – as well as the aron kodesh, “The holy ark” where the scrolls of the Torah are kept. These remains were in the row of a two-tone star pavement.

Archaeological excavation of the Great Synagogue of Vilnius

Sacked and devastated in 1941, the synagogue was finally demolished during the Soviet era, in 1956-1957, to make way for a school. Ultimate destruction of which archaeologists have found traces during their excavation. “When we arrived to search thearon kodesh and the bimah, where generations of Jews have read the Torah scroll for more than three centuries, it turned out, unfortunately, that the heart of the synagogue had been badly damaged by the Soviet destruction ”, said Israeli and Lithuanian excavation officials Jon Seligman and Justinas Rakas in a statement relayed by The Times of Israel.

The Great Synagogue rose from the ground in the 1630s, towards the height of the Two Nations Republic formed by the union of Poland with Lithuania. With a modest appearance from the street, the interior of the building was very richly decorated and ornate, from the 18th century.e century, with a baroque-inspired dome. Four imposing Tuscan columns also struck the minds of many visitors. They were also partially uncovered during the last excavation campaign. “We have found the complete remains of one of the four great pillars which supported the roof of the Great Synagogue”, welcomed in a statement the Israel Antiquities Authority, partner of the archaeological site.

Marked by a great religious tolerance from the promulgation of the confederation of Warsaw in 1573, the time saw the Jewish community of the country develop and double in number between 1550 and 1600, reaching about 300,000 souls, of after the estimates put forward in 2010 by researcher Daniel Tollet. In Vilnius, then known as Wilno then Vilna, the place of worship becomes a renowned spiritual and intellectual center, at the head of a network of 12 secondary synagogues, numerous Torah study centers and various other buildings. community. Vilnius’ Jewish population was estimated at around 80,000 on the eve of World War II.