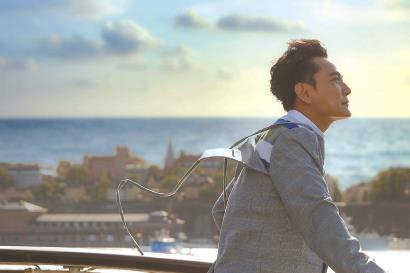 Promotional photo of Zhang Xinzhe’s new album “Just Got it”

At the end of the year and the beginning of the year, various music charts are launched one after another. Open the “Hot Song List”, most of the singers and song names above are confusing. But after clicking in and listening, netizens felt that they were impressed, and they could even hum the chorus of individual songs. These musics are basically popular on short video platforms, and they often “surround” our lives in the form of short choruses that loop indefinitely. In terms of melody, the overall framework of these songs is very similar to “Rice Loves Rice” and “Two Butterflies”, which were popular in the color ringtone era more than ten years ago.

Is this really the case? Only in the past six months, veteran singers Cui Jian, Zheng Xiuwen, Zhang Xinzhe, Han Hong, Huang Qishan, Li Jian, etc. have all released new records; and a group of singers who have risen from the talent show such as Zhang Jie, Yuan Yawei, Mao Buyi, etc. also have their own complete The album came out; Wutiaoren, who entered the public eye with the help of the Internet and variety shows, and the Shanghai Rainbow Chamber Choir also released new works. Although these works cannot be described as “rock-breaking”, they are full of sincerity in terms of production and singer performance. Judging from the feedback from the audience, these albums also have excellent quality products with a score of more than 8 points.

But why are these high-quality works difficult to reach the public, which makes the influence of the Chinese music scene frequently questioned?

Short Video Divine Comedy = Mobile Ringtones?Even if it becomes a soundtrack, it is difficult to form an influence even if it is out of the circle

Recently, a music entertainment festival announced the top ten hot songs of 2021. Among them, “White Moonlight and Cinnabar Mole”, the original singer is rarely well-known, but since the song was launched on the first day of 2021, it has quickly become one of the most popular soundtracks on short video platforms, and the number of related topics has reached 5.35 billion. It is no exaggeration to say that if you swipe a short video for a few minutes, you will swipe a small video with this song as the background music.

Sharp-eyed netizens found that whether it is “singing celebrities are not popular” or the dilemma that their consumption and communication scenes are attached to other products, they are quite similar to the era of mobile ringtones. Yang Chengang’s “Mouse Loves Rice” and Pang Long’s “Two Butterflies” sold 100 to 200 million yuan in sales, which was difficult to reach in the record era. Since then, although these songs have been sung one after another by mainstream music singers, and the singers themselves have performed commercial performances and released albums, they have also become popular for a while, but the good times will not last long. Compared with professional singers under the training package of the record industry, Yang Chengang and others were dubbed “Internet singers”. Since then, few songs have reproduced the glory of explosions, and finally faded out of the public eye.

At present, the short video Divine Comedy is regarded as the “revival” of the popular color ringtones of the past. In the final analysis, because video has become the mainstream of entertainment consumption, it is increasingly difficult for listening to songs to occupy a larger market share as an independent entertainment consumption. Whether it’s the CRBT that appeared more than ten years ago as a waiting time for calls, or the Divine Comedy as background music in the era of short videos, often only the climax of the chorus appears for dozens of seconds. On the other hand, as the “main battlefield” of popular music consumption, online music platforms have struggled to compete with video platforms in recent years. Even the big data calculation of the popularity of its list reflects the popularity of the background music of the short video platform, rather than the topicality, professional evaluation, audience feedback, etc. of a single popular song on the whole platform. Video Divine Comedy continues to dominate the charts.

Under the abduction of big data, “grabbing ears” and “brainwashing” have become the first priority of creation

On the surface, the limited spread of popular music is affected by the migration of entertainment consumption scenarios. But this still cannot explain why the little-known short video Divine Comedy, which competes with the track, spreads far faster and more widely than the song crafted by the record company and well-known singers. In the opinion of professionals, there is a reason for the market sinking. Due to the lack of DJs and professional chart guidance in the record era, the public chooses more popular and simple songs. Among them, there are also considerations in terms of copyright fees and revenue sharing. Video platforms use online songs that recommend “savage growth”, often with fewer restrictions. At a deeper level, it is the consumption logic of this “dependency” that has quietly changed the logic of song creation, making “ear-catching” and “brainwashing” the top priority of creation.

Pop music that appears as a soundtrack often needs to be matched with a short video screen to catch the audience’s ears within a dozen seconds or even a few seconds. Then, this requires that the melody of the song must be catchy, the rhythm should be bright and concise, and the content of the lyrics should also give priority to conveying emotions. Taking these considerations into account, the “slobber songs” that professionals in the recording industry sneered at in the past have more natural advantages. And once a “saliva song” becomes a hit, its melody trend and lyric theme will soon become the object of imitation. This is why short video songs often give listeners a familiar sense of repetition. In the face of such a situation, singer Yang Kun sighed: “I once said that music has gone backwards for at least ten years. I suddenly found out that I was wrong and was too conservative.”

This statement is a bit extreme. Among the popular models, there are also works that are good in terms of song form and audibility, such as “Wild Wolf Disco” and “Heart Like Still Water”. It is a pity that this kind of song that surprises the industry is only sporadic and occasional, and it is difficult to generate a sense of collective innovation and creation in the industry.

This can not help but think of the Chinese way of R&B (rhythm and blues). As a black music genre, R&B was first introduced by music producer Xiao Woo and other singers to test the waters in the market. Since then, there are singer-songwriters with overseas living backgrounds such as Tao Zhe, who continue to explore Chinese singing. On the basis of his predecessors, Jay Chou more consciously mixed R&B music with traditional Chinese music represented by pentatonic tones, thus forming a unique “Chinese style”. From “Dongfeng Po” to “Blue and White Porcelain”, the process of exploring the maturity has also formed his personal unshakable musical influence. Since then, Lin Junjie, Hu Yanbin and Fang Datong have all completed their wonderful creations under the influence of this trend, which improved and enriched this style, and also set off a wave of changes in the Chinese music scene.

This kind of innovation and change is by no means under the “big data kidnapping”, and it can be completed only by being satisfied with “catchy”.

Fortunately, professional musicians did not give up because of the shrinking market and the reduction of attention. After a lapse of six years, Huang Qishan released “Xiaoxia 2.0”, which is almost the same as the album six years ago from the album title to the album cover. But netizens applauded such “repetition”. This is because this album abandons the gorgeous arrangements that are popular nowadays, and the singers no longer continue the soaring high-pitched dazzling skills in variety shows. Quality Chinese is popular”, popular but not popular. Lu Yanliang, a 19-year-old newcomer who appeared on the variety show “Do You Listen to My Music” at station B, failed to use this variety show to reach the public. However, his debut album “Fresh Soul” released last year still attracted the attention of the industry – when hip-hop was in power, he continued the development of R&B in China, and he was dexterous and played the Z generation. Unique sense of lightness and modernity.

If good music has always been around, it may be the industry main body represented by online music platforms that is really worth reflecting on. When taking over the stick of record companies, the platform should think about how to not use “big data” as the only criterion for measuring the list of works, but to form a more professional and leading song recommendation mechanism, and win the market initiative through digital product innovation , let original good songs surface and make more volume. And this is also the cornerstone for the development of the music industry and for all parties to achieve a win-win situation.

10 amazing benefits of orange peel and its correct uses on the body, most notably teeth whitening and treatment of constipation