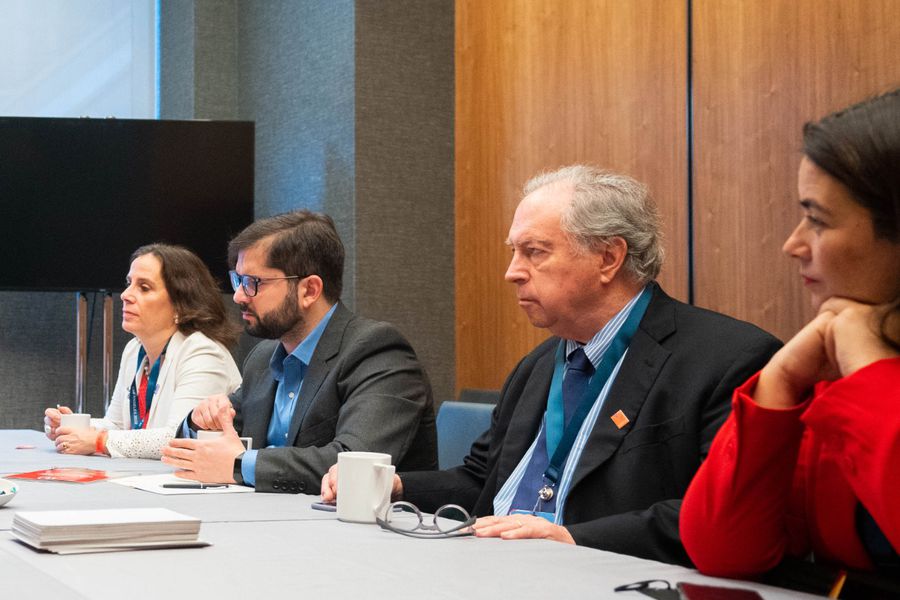 A photo in which Chancellor Antonia Urrejola is seen escorted by ten parliamentarians from the Socialist Party was the one that was spread yesterday on social networks.

The image -in which senators Álvaro Elizalde, José Miguel Insulza and Alfonso de Urresti appear and deputies Daniel Manouchehri, Tomás De Rementería, Daniel Melo, Ana María Bravo, Danisa Astudillo, Nelson Venegas and Raúl Leiva- was viralized by some of the deputies on their Twitter and Instagram accounts after the lunch they had alone with the minister, an appointment to which their peers in the Senate stopped by to say hello and then leave for an appointment in the Interior.

“Socialist deputies and senators met with the chancellor @aurrejolarree to discuss the President’s tour @gabrielboric, and its benefits in terms of the environment and the fight against organized crime. We have a luxurious, serious and prepared chancellor”, Manouchehri published on his Twitter in reference to the Secretary of State, who although she is not a member of the PS, is recognized as one of her ranks in the cabinet.

The gesture of the socialists, which was interpreted as a kind of shielding the head of Foreign Relations, occurred a few hours after the end of the North American tour on Saturday in which Urrejola accompanied the President Gabriel Boricboth during his time in Canada and during his participation in the Summit of the Americas, which was held in Los Angeles, United States.

Despite the positive balance of the President’s debut in a multilateral forum, it generated suspicion in some official sectors, particularly in the PS, the role played in the trip by the head of advisers to the Second Floor, lucia dammert.

The sociologist had a showy participation in the tour. She was seen accompanying the head of state in most public and private activities and she even joined some bilateral meetings with presidents of the hemisphere. For example, in the meeting that President Boric held with his counterpart from Ecuador, Guillermo Lassothe sociologist sat in the same line as Urrejola.

The issue was addressed yesterday at the end of the enlarged political committee of La Moneda. According to those present at the weekly coordination instance, the representative of the PPD, Marco Núñez, asked the government directly if what was stated in a publication of the media Exante last Saturday, which gave an account of the tensions between Urrejola and Dammert, was effective. The answer was given by the ministers Camila Vallejo (Segpres) and Izkia Siches (Interior), who ruled out the existence of any conflict between the two.

Urrejola herself had had to take charge of the issue on Sunday in an interview with Mesa Central. Although the minister ruled out that there were two visions in the government regarding foreign policy and that he would not comment on anonymous sources, added that “running a Foreign Ministry today with all the challenges we have is not easy and we discuss and analyze, there are differences and finally we reach consensus. That is inside the Foreign Ministry, with the sectoral ministries, with the Second Floor and it is part of doing politics and being a government. The important thing is that it was a really successful tour, where President Boric’s leadership was recognized internationally.”

In the PS they assure that although the appointment with the deputies was planned some time ago, they recognize that the timing it was not random. “It is organized with the aim of supporting the chancellor,” admits one of them privately. And he adds: “We don’t understand why a security adviser is on the road, making foreign policy decisions when the domestic situation is quite hot.”

Deputy De Rementería put it this way: “What the chancellor has said is that there is no conflict here. It seems natural to me that there isn’t, because the Second Floor advisers don’t have the power or the capacity to get involved in foreign policy. It is the President together with the Ministry of Foreign Affairs who handle this matter and not the advisers”.

Deputy Melo, for her part, highlighted after the meeting that “the chancellor is a person with great international experience. This is good for the government of President Boric, but above all for our country”.

In addition to the appointment of the parliamentarians, a meeting between the new president of the PS, Paulina Vodanovic, and Urejola. Although in the community they say that the idea was foreseen before, the chosen moment coincides with the stir generated by the role of Dammert.

In the government they recognize that the space that Dammert has sought to capture in international matters – where he works side by side with adviser Carlos Figueroa – has caused some tension with the Foreign Ministry. The same sources explain that President Boric, because of his style, has given him a space that would not conform to the codes of traditional diplomacy. “Foreign policy is carried out by the President through his chancellor, it has always been like that”, insists a socialist.

Despite this, other Executive sources downplay the tensions between the Second Floor and the Foreign Ministry and recall that this is not the first time this has happened. Although neither Michelle Bachelet in Sebastian Pinera They traveled with their bosses from the Second Floor, in the last term of the former president, the role played by the person in charge of international relations on the Second Floor, Benjamin Salasalso caused friction with the then foreign ministers Roberto Ampuero and Teodoro Ribera.

From the Presidency, in any case, they “categorically” ruled out any conflict. In addition, they maintain that there is no interest on the part of the Second Floor to dispute the functions that correspond to the Foreign Ministry.