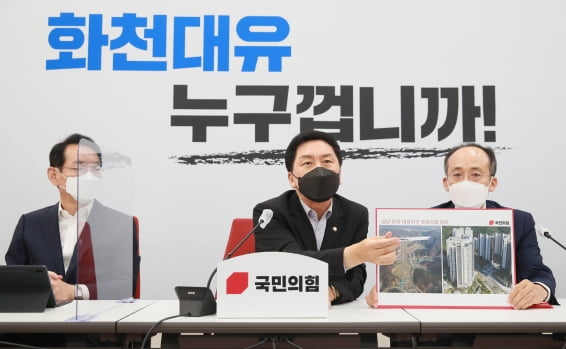 Park Joong-soo, CEO of Happy FNC Foundation, is the largest shareholder of Kin & Partners.
Lending up to 45.7 billion won from 2015 to Hwacheon Daeyu Daejang-dong development project

Controversy continues over the Seongnam Daejang-dong development project (Seongnam Pangyo Daejang Urban Development Project), which was promoted by Gyeonggi Governor Lee Jae-myung, the presidential candidate of the Democratic Party, while he was mayor of Seongnam.

However, it is attracting attention as it was confirmed that the initial investor who invested money in Hwacheon Daeyu Asset Management (Hwacheon Daeyu), which led the Daejang-dong development project, was the representative of the SK Group-related foundation at the time.

In the 2016 audit report of Hwacheon Daeyu registered in the electronic disclosure system of the Financial Supervisory Service on the 19th, an investment company called Kin & Partners appears.

Hwacheon Daeyu borrowed 29.1 billion won from Kin & Partners for the A1~2 and B1 block projects in the Daejang District since 2015, when the project started. An annual interest rate of 6.9 to 13.2%, maturities between 2017 and 2020, etc. were attached. Hwacheon Daeyu also borrowed 6 billion won from a company called MSBT under similar conditions.

It is estimated that this money was used for the purpose of paying the initial operating cost of Hwacheon Daewoo and the land and business contract. According to the financial investment industry, special purpose corporations (SPCs) established for real estate development, such as Hwacheon Daeyu, have little financial power on their own, so they have to bring in money from outside. The founding capital of Hwacheon Daeyu is only 50 million won.

An industry official said, “In order for a real estate development company to raise a large-scale project financing (PF) loan or receive a bridge loan from financial companies, it must first resolve risks such as business licenses and land purchase contracts. The down payment is prepared by borrowing money from so-called ‘Jeonjus’, who are early investors.”

In fact, Hwacheon Daeyu said, “The collateral for the borrowed money is the project site that we plan to acquire in the future.” We paid 7.239 billion won, which is 1% of the cost excluding the construction cost, to the corporation as a deposit for the implementation of the business agreement,” he explained.

In 2017, Hwacheon Daewoo borrowed money from Kin & Partners, increasing to 45.7 billion won (annual interest rate of 13.2 to 25%) in both short and long term. In the same year, Hwacheon Daewoo succeeded in raising loans from the financial sector as its business went on track, and secured short-term borrowings totaling 256.8 billion won from Seongnam Daejang First, a PF securitization company. 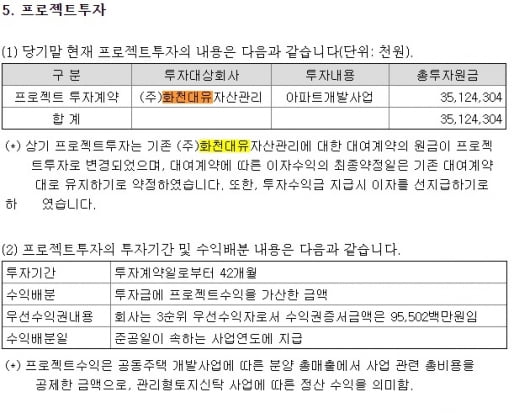 In the same year, Kin & Partners also classified the long-term loan amount of 35.1 billion won as project investment. He also wrote, “Project revenue is the amount obtained by deducting the total business-related expenses from the total sales of pre-sale for the apartment development project, and it means the settlement income from the managed land trust business.” This means that Kin & Partners will take a significant portion of the apartment sales revenue that Hwacheon Daeyu will achieve in the future. Kin & Partners earned 13.1 billion won in player revenue through interim settlement of project profits with Hwacheon Daewoo in March.

Cheonhwa Dongin No. 4 is an SPC that invested 87.12 million won in the name of SK Securities in Seongnam Ui Garden, the developer of the Daejang-dong development project, and received more than 100.6 billion won in dividends over 3 years from 2019 to 2021. The CEO of Cheonhwa Dongin 4 is a lawyer belonging to a law firm where former Special Prosecutor Park Young-soo served as the representative lawyer, and it is known that he has left for the United States.

What kind of company is Keen & Partners that led Hwacheon Daeyu’s Daejang-dong development project as an early investor in the business success? Established in December 2013, Kin & Partners is engaged in investment advisory and management consulting as its main businesses.

In 2018, Kin & Partners moved its office to the 5th floor of the Wooran Cultural Foundation building located in Seongsu-dong 2-ga, Seongdong-gu, Seoul. In June, it was merged with Placepo, a lodging company that was a subsidiary.

The owner of the building is Choi Ki-won, chairman of the SK Happiness Sharing Foundation. Chairman Choi is the younger brother of SK Group Chairman Chey Tae-won and is the third-largest shareholder with a 6.85% stake in SK Group, the holding company of SK Group. In 2014, he established the Wooran Cultural Foundation in memory of his mother, Wooran Park Gye-hee, director of the Walkerhill Museum, and serves as the chairman of the board.

At the time of the investment in Hwacheon Daewoo from 2015 to 2016, the largest shareholder (100% stake) and CEO of Kin & Partners was Park Joong-soo.

The magazine inquired about the details of Hwacheon Daeyu investment and the relationship with the Wooran Cultural Foundation to Kin & Partners, but the company refused to answer any questions.