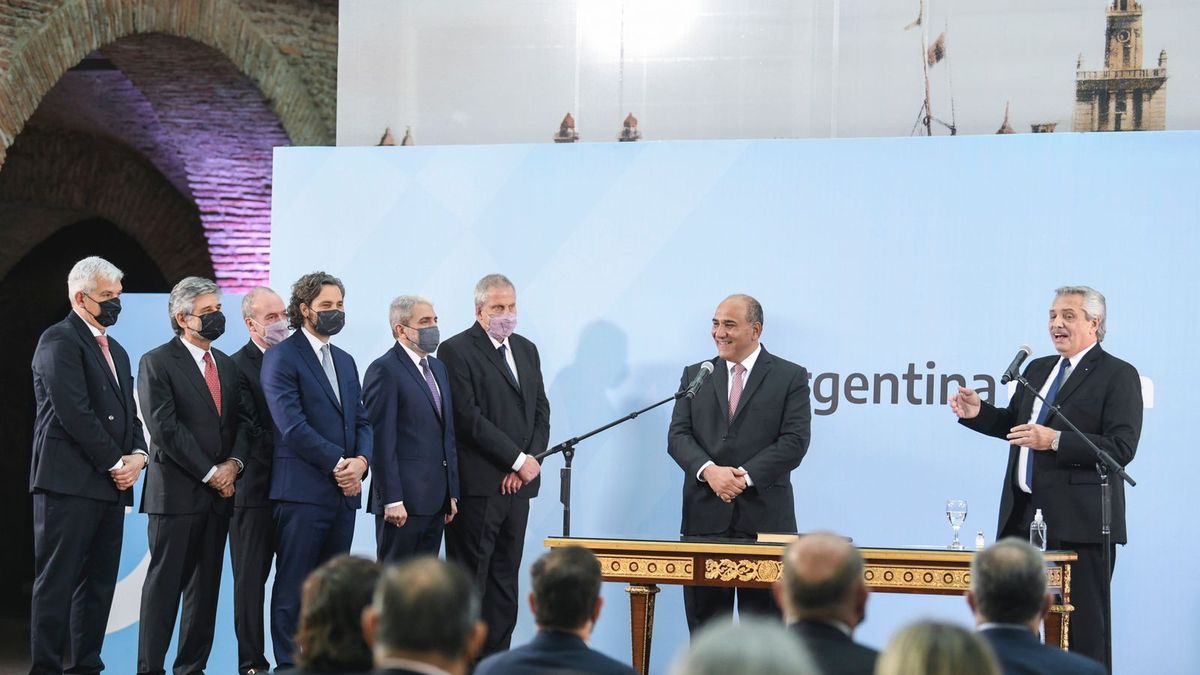 Meanwhile, Alberto Fernández thanked all the outgoing officials of his Cabinet, who he said played an “exemplary” role and that “they have left everything of themselves in the time that it was their turn.” “I want to thank you honestly, you have been exemplary officials”he said when leading the swearing-in ceremony of the new ministers.

The Head of State said that the changes “They always have a unique sense, to move towards a better project” and he added: “Their purpose is to respond to a part of the Argentine electorate that has been affected by the pandemic and that the economic growth that actually occurs has not reached them with the speed that we wanted it to arrive “. 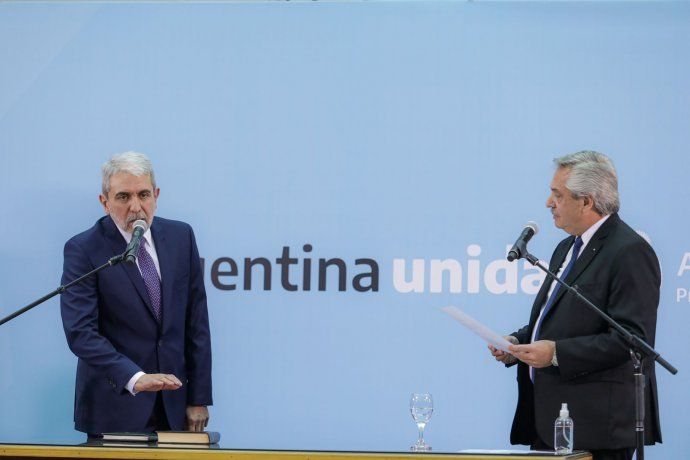 Regarding the new names of the Cabinet, the Head of State thanked them and highlighted: “I know some of them, I looked for them among those who worked with us during the Néstor Kirchner government, such as (Julián) Domínguez, Aníbal (Fernández)”.

The Chief of Cabinet Juan Manzur was the first to assume and who more guests brought. With its own swelling, was cheered every time his name was mentioned by his entourage, which remained standing because they did not reach the assigned chairs.

“We want to be part of a country that integrates and functions to get those who have been left behind out of postponement. It is no coincidence that he preferred that a northern governor take over the Head of Cabinet”, the President said about it.

The new Chief of Staff, Juan Manzur, brought his own fans to the Bicentennial Museum.

Also they took the oath as ministers Santiago Cafiero, of Foreign Relations, International Trade and Worship; Aníbal Fernández, from Security; Jaime Perzyck, from Education; Daniel Filmus, from Science and Technology; Julián Domínguez, from Livestock, Agriculture and Fisheries; and Juan Ross, as Secretary of Communication and Press.

In the first rows the president of the Chamber of Deputies of the Nation, Sergio Massa; the deputy and president of the Frente de Todos bloc, Maximum Kirchner. The governors said they were present in a virtual and face-to-face way, and there was also attendance of national senators and deputies, union and business leaders.

President Alberto Fernández took advantage of the swearing-in act of the new ministers to announce the relaunch of the campaign, which was relegated last week due to the internal coalition of the Government.

“This Wednesday we are going to inaugurate the Faculty of Medicine at the University of José C. Paz”, anticipated the president at the time that he called for the first time since the beginning of the pandemic to militancy.

In his speech, he stated that “What is coming has to do with decisions that we are going to start making from now on, and which are intended to respond to a part of the electorate that the pandemic has left badly and to which all economic growth has not arrived with the speed that we would have liked to arrive, and we are working on that “.

From early on, Balcarce 50 experienced a day of changes in which officials and boxes paraded, while several meetings were held.

President Alberto Fernández arrived around 11 and he remained in his office until he was sworn in. There he spoke with the head of the Frente de Todos bloc in the lower house, Máximo Kirchner, and the ministers of Public Works, Gabriel Katopodis, and of Health, Carla Vizzotti.

The Head of State also held a meeting with Santiago Cafiero, who will be in charge of the Ministry of Foreign Affairs and Worship. Both reviewed the axes of the speech that the Argentine president will give tomorrow, around 5:00 p.m. in Argentina, virtually before the United Nations Assembly. 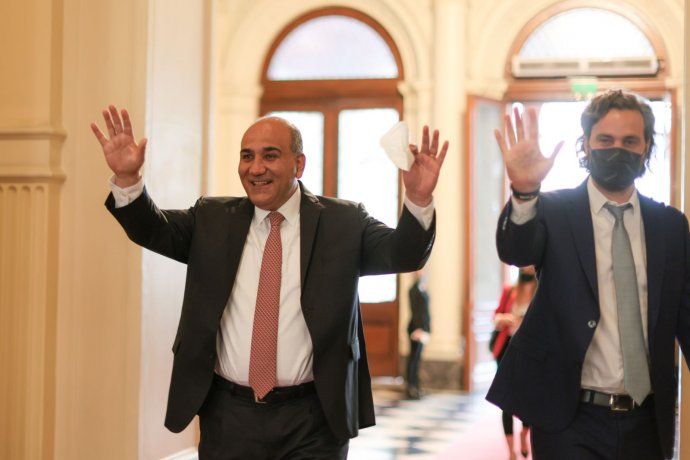 “It is going to demand to reconfigure the global financial architecture, taking on the role that the IMF played in recent years in the world and in the country in particular”, sources from the Presidency advanced.

About, it was reported that “the Fund’s loan will be classified” during Mauricio Macri’s previous administration as “a toxic and irresponsible debt.” Along the same lines, the president will ask for a “solution to the debts of middle-income countries” and will “emphasize that the pandemic has reflected the inequality that exists in the world,” which has been “reflected in production and distribution. in vaccines and in social consequences “.

The new Chief of Cabinet Juan Manzur arrived at the Casa Rosada after 5:00 p.m. along with his predecessor in office, Santiago Cafiero. A few minutes before, Aníbal Fernández had done it. The new Minister of Security said that he has “the best” expectations for this new stage. “I have a very particular way of working,” he replied when asked by the accredited press about what his management axes will be. 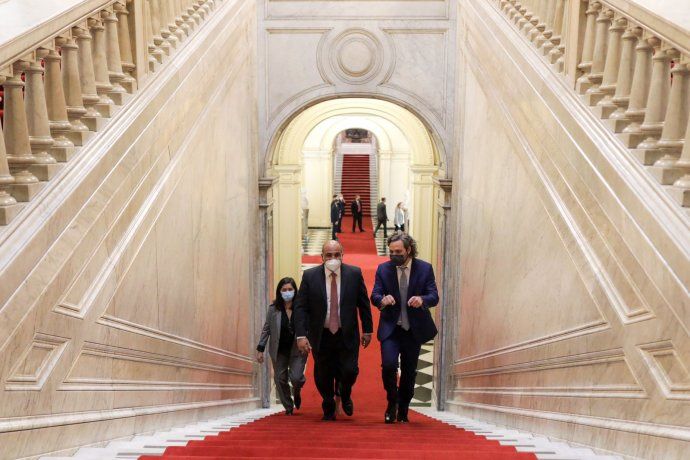 After the event at the Bicentennial Museum, Santiago Cafiero took the opportunity to say goodbye to the accredited press before moving to the offices on Esmeralda Street. He was accompanied by who was his Deputy Chief of Staff, Cecilia Todesca Bocco, and who will now assume as Secretary of International Economic Relations.

While some officials said goodbye, others disembarked in their offices. Such is the case of Juan Ross, the Secretary of Communication and Press who will replace Juan Pablo Biondi. Speaking to the media, the official pointed out that “there are many things that are well done and many to correct.” “A stage of profound relaunching of the management is coming,” he said, synthesizing what was experienced during the day.

In this framework, the brand-new Chief of Staff announced after the end of the act that they are coming “economic and health announcements” In the course of the week, “slowly but surely”. One of his first activities on the agenda, he anticipated, will be a meeting with the Minister of Health Vizzotti, and said in that sense that “From tomorrow or this week we will be releasing activities with all the care that the case requires.”