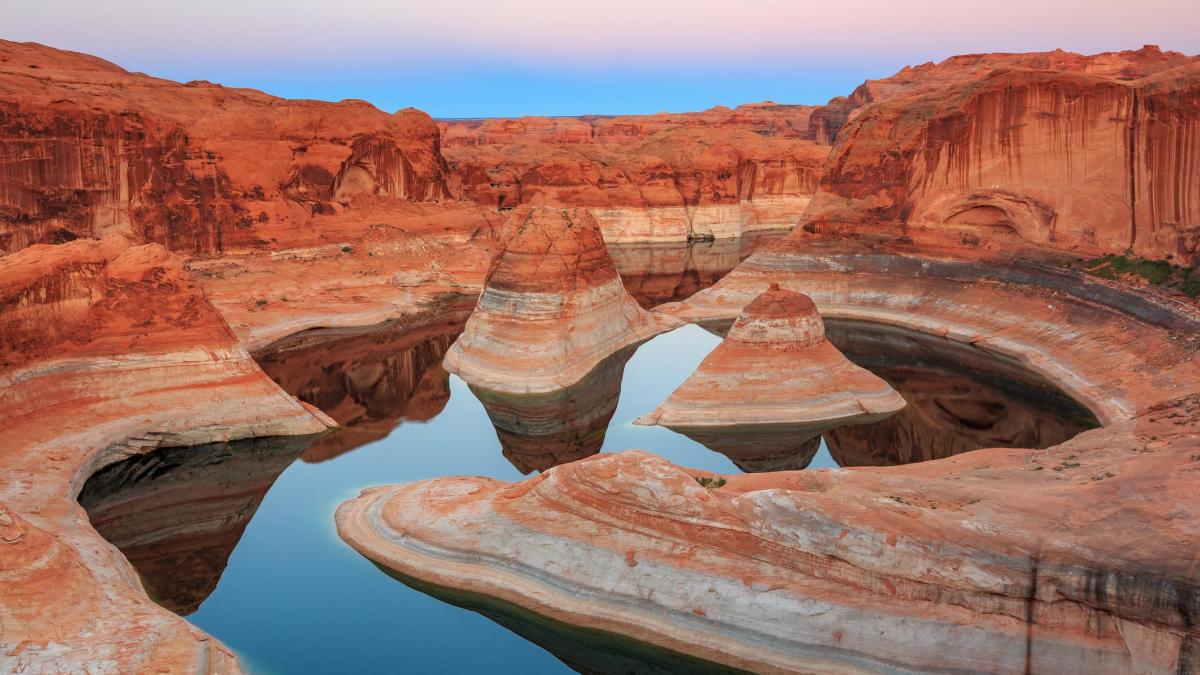 The hand of man built the reservoir of Lake Powell. That same hand is causing its desiccation.

The Powell, located between Arizona and Utah, is 300 kilometers long and is the second largest swamp in the United States. It was created to take advantage of the Colorado River from the construction of the Glen Canyon Dam.

Edward Abbey –writer, adventurer, soldier, ranger and environmental activist who died in 1989–, will be in the afterlife dying of laughter. In 1975 he published his novel The monkey wrench gang ( The gang of pliers , in the Spanish edition), where its four protagonists dispense justice in defense of the ecosystem. So they set out to blow up the most heinous attack on nature: the concrete monolith that drowned the wonder of Glen Canyon.

Abbey’s, wildlife lover, must be a bitter laugh. The sabotage is consummating. But it must be attributed in part to the human battalion that fuels the climate change bomb, caused by the destruction of the environment for the sake of excessive progress, as he denounced.

“The biggest environmental mistake our country has made,” Abbey said about that pharaonic work. She described it as a misdeed. “To understand the nature of this crime, imagine the Taj Mahal or Chartres Cathedral buried in mud until only the towers are visible.”

The purpose of the dam was to generate electricity. It also had to be a warehouse that would allow handling the rising flow of the Colorado. Ranchers, farmers, and an expanding Southwest United States would have guaranteed water supplies. The Glen Dam and Lake Powell, with its downstream neighbor Hoover Dam and Mead Swamp (the largest in the country) would provide stability.

The mega-drought, the driest period in 1,200 years recorded in that territory, as confirmed by a recent study, has left the Powell at the lowest level in its history since it was commissioned in 1963. It practically does not supply water and its electricity production danger.

The Powell mega-reservoir, inaugurated in 1963, does not supply water and its electricity production is in danger

A trip to that place in 2011 emerges in memory. In addition to the initially conceived uses, a powerful tourist industry was developed in that artificial lake, worth 500 million dollars a year. Recreational boating is also devoted to shipwreck. Numerous boarding ramps are in disuse, in dry land.

“Some 40,000 hectares have been exposed. The water level is now about 30 meters below the 2011 level,” says Eric Balken, executive director of the Glen Canyon Institute, a nonprofit organization founded in 1996 that seeks to return the area to its natural state or almost.

“We are not advocating destroying the dam, it is fine as a backup infrastructure, the Colorado has caused biblical floods in the last thousand years, without eliminating these installations, the opportunity must be taken to restore the canyon,” he adds.

This new normal of aridification it has unveiled the lost Eden, with its hoops or its bridges, “a slice of the original paradise,” wrote Abbey.

“What is happening in Lakes Powell and Mead really underscores how severe this drought is. Both reservoirs, the main source of water supply for many states, have experienced record declines and this forces supply cuts, ”says Benjamin Cook, a researcher at NASA’s Goddard Institute affiliated with Columbia University in New York.

Cook is one of the co-authors of that study in which it is determined that the Southwest of the United States suffers the worst drought in twelve centuries. This really is a return to the past, to the 9th century.

This situation is reached by a drought that began in 2000 and has lasted into the driest period in 1,200 years. This circumstance has caused the reduction of the water supply, has devastated farmers and ranchers and contributed to the spread of fires. Nothing like it since 800. All that information was in the tree rings, which record “data” from 500, 1,000 or more years ago. “This gives us a very long baseline to understand what drought variability is like in that region,” says Cook.

The yo-yo effect: although there are rains, they are not enough to fill everything that the drought took away

Tree rings measure growth, wider in wet years and thinner in dry ones. This measurement makes it possible to determine current flow, soil moisture or rainfall.

These scales indicate that it is heading towards the record of the 30 driest years. In a previous study, they established that from 2000 to 2018 it was the second driest period since 1500. However, this calculation has been increased because last summer was the driest in three centuries. on a par with 2002, at the start of the current drought cycle.

The study, published in the journal Nature Climate Change, also postulates that it is the longest and most widespread or extensive stage, in which global warming caused by humans plays a determining role. Cook says that computers allow them to simulate what this drought would be like without the contribution of man.

From there they determine that this period, without climate change, would have been a very dry stage due to what they call “normal old bad luck”. But the experimentation allowed them to conclude that this time it is 40% more severe due to the human contribution.

“Without this collaboration there would be no record,” he clarifies. During this week, following the publication of the report, areas of the country affected by this phenomenon have had rain and even snow. Cook indicates that in a period of megadrought there may be wet alternatives, the yo-yo effect, although the parameters are not modified.

“These precipitations do not eliminate the drought. It is so deep that you need a lot of water to recover and for this reason the drought does not seem to end in 2022, ”he emphasizes. “The study indicates that we need to have more realistic expectations about how much water is available in the region,” she says.

There will be wet years, but fewer and fewer. This consideration means rethinking how agricultural production is developed, which consumes 70 to 80% of the water. And this, Cook insists, amounts to conflict.

From Lake Powell, the second largest in the country, emerges the Eden of the Glen Canyon that buried the water

In this disaster-prone context, with the tourism industry engaged in at least a restructuring of Lake Powell, Balken admits a certain satisfaction.

“We try not to be myopic. Climate change creates challenges and there can be a transformation, new opportunities arise, there are already people coming to see what has come to light”, she comments. He reminds that no one should be surprised by what is happening, since in a 2009 report, scientists Tim Barnett and David Pierce warned that something like this would happen due to the diminishing flow of the Colorado. They received the disqualifying of crazy.

“There are many sad stories about climate change – he reflects –, fatalism, the disappearance of ice sheets, desertification, but something good has appeared here. The Myth of the Miracle of Lake Powell”.

In energy matters, Europe put itself in the hands of Putin