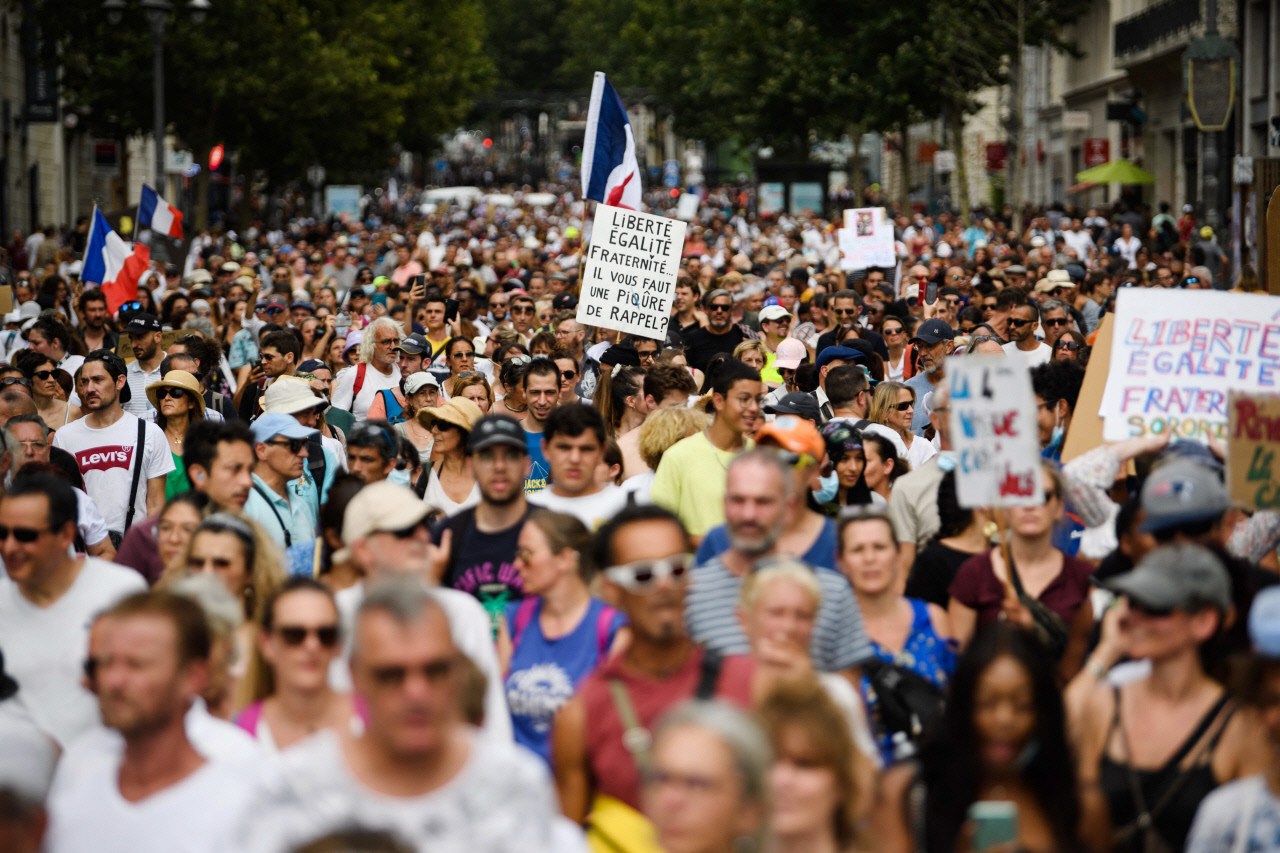 France and Italy “Give ‘Vaccination Confirmation’ when using multiple facilities”
In fact, large-scale protests and protests against the ‘compulsory vaccination measure’

Due to the spread of the delta mutation, the number of new confirmed cases in the United States and major European countries has reached the highest since this spring, raising concerns about a fourth re-spread of Corona 19. These countries have even introduced high-strength measures to virtually force vaccination, but some citizens’ deep-rooted ‘vaccine reluctance’ is leading to conflict with the government.

According to the Johns Hopkins University tally, as of the 23rd (local time), there were 118,791 new confirmed cases in the United States, more than doubling from the previous 50,000. Europe also reported the largest number of confirmed cases since this spring. In France, the number of cases increased by 25,624 on the 24th, the highest since May 5th. Turkey also recorded 12,381 people per day, the highest since mid-May.

Due to the surge in the number of confirmed cases, the U.S. and Europe are rapidly raising the level of quarantine. From the 21st, when using cultural and leisure facilities where more than 50 people gather, such as movie theaters and gyms, France has made it necessary to present a certificate that records the fact that they have been vaccinated. Italy also plans to make it compulsory to present a ‘Green Pass’ that proves negative for vaccination and COVID-19 to enter indoor multi-use facilities such as restaurants. For now, it was decided that raising the vaccination rate would be the way to fight the spread of the delta mutation.

There are countries that do not shy away from ‘super-precipitation’ that severely restricts individual freedom. On the 23rd, the Russian government issued a quarantine-related recommendation that “employees should exclude workers who refuse to vaccinate without good cause from work without compensation.” They restricted the right to work and demanded vaccination. Australia has imposed a lockdown in the Sydney area, barring people from going outside for essential purposes, such as buying essentials.

Government measures to make vaccination virtually compulsory touched the deep-rooted ‘vaccine reluctance’ in Western society. Over the weekend, large-scale protests took place in France, Australia, Italy and Greece to protest government policies to encourage vaccination. In France, more than 110,000 protesters took part in protests, resulting in physical clashes with police. Some Europeans who participated in the protests said in an interview with the Associated Press, such as “I’m not against vaccines, but everyone should be able to do what they want with their bodies” and “Corona 19 vaccines are too experimental.”

This is expected to be the last obstacle for Western countries to reach herd immunity. Major European countries have secured vaccine supplies by accepting criticism of ‘vaccine nationalism’, but the inoculation rate is still stagnant at 40-50%. This is in stark contrast to countries in Africa and Asia, which are struggling to find a vaccine.