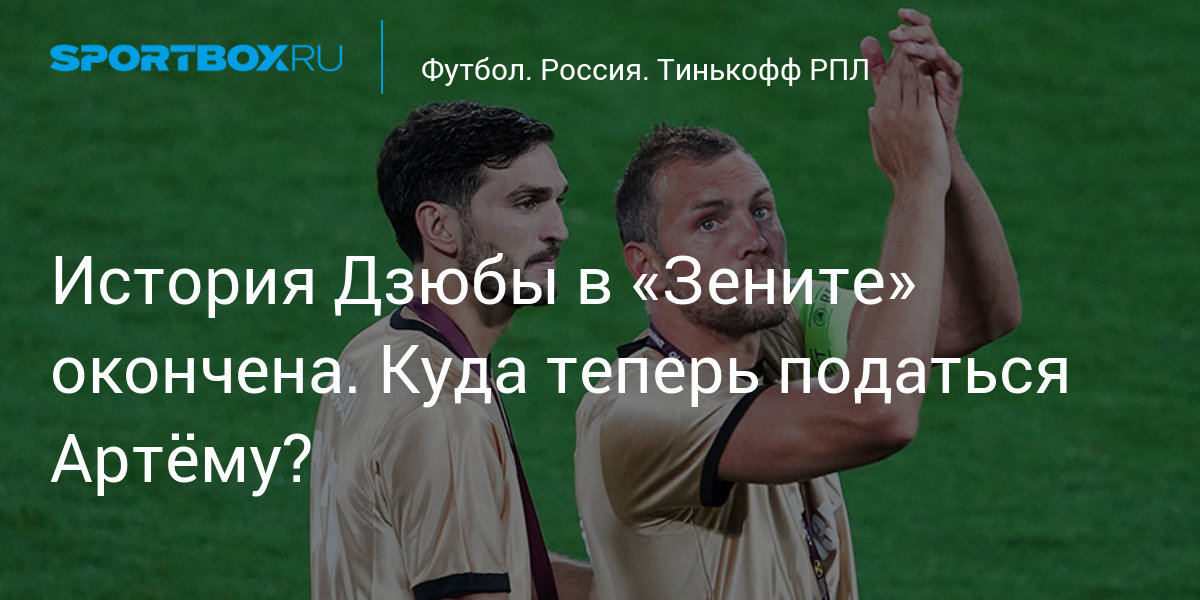 Sochi and other career options for the RPL record holder.

The era is gone. Artyom Dzyuba spent in “Zenith” seven years old and now he’s off on a new adventure. This is exactly what the attacker said in the video, which he published in his personal Telegram channel.

In the video, Artem recalls the best moments of his St. Petersburg career, thanks his partners, coaches and management, and then leaves the Gazprom Arena to the song of George Michael Careless Whisper. Bold, touching, in the style of Dzyuba …

Only one question remains: where will the main Russian forward of recent years move on? There are several assumptions.

Recently, there have been many rumors in the media that Dziuba could continue in the foreign championship. Among the contenders for Artyom is the Serbian “Red Star” and Turkish Fenerbahce. Insiders claim that the striker himself is inclined to move to Istanbul. The local championship seems to him more attractive.

It would be very interesting to look at Dziuba in another league. However, it will not be easy for the player himself: he is no longer at that age and physical form to easily adapt to radical changes. Therefore, such an option looks like an adventure.

In addition to Europe, there is also China and other eastern countries. There, Artyom’s level will be at least not lower than average. Yes, and the money will certainly put good money. After the 2018 World Cup Dziuba, Chinese clubs were interested in Dziuba, but a lot of time has passed since then.

In Europe but with friends

If you go to Europe, then where you have your own people. It is clear that Artyom will not be accepted to Atalanta and Monaco. But in Ferencvaros you might as well try it! Stanislav Cherchesov always spoke flatteringly about Dziuba. The coach and the player have many great shared memories.

In winter, Cherchesov was already asked about the possibility of Dziuba moving to Hungary. Then the former coach of the national team said that Artyom was a “top footballer”, but his transfer was still out of the question. Who knows: maybe now everything will change? Moreover, Dzyuba can be obtained completely free of charge.

Where without talking about “Spartacus”? When some former star of the Red-Whites finds himself without a contract, they immediately begin to woo her to the former club. Recently, this happened, for example, with Denis Glushakov. Now they have taken up Dziuba, although his return seems to be something out of the realm of fantasy.

Fans of Spartak despise Artyom for betrayal – they are unlikely to accept him. And why Paolo Vanoli is another overall striker? Shamar Nicholson and Alexander Sobolev are coping well with their tasks and seem to be not going to leave. If Dzyuba still signs a contract with the Red-Whites, it will not be just a sensation. This will be a powerful provocation. However, Artyom loves this.

One of the most interesting options would be to move to Sochi. The club from the south of Russia, most likely, will have to part with Mateo Cassierra, who was eyed by the Rangers. Given the love of Sochi residents for experienced football players, Dzyuba could be an ideal replacement for the Colombian. In addition, among the team’s players there are many of his former partners in Zenit.

Next season, it is Sochi that could become the main rival of St. Petersburg in the fight for the championship. For this, the team has everything: a cool coach, a staged game, bright leaders. If you manage to save and increase all this, why not aim at gold? In this scenario, Dziuba can again become the champion of Russia. But with another club.

Finally, you can always go to a lower class club. In Russia, there are definitely a dozen teams that will gladly give Dziuba a place in the squad. Fakel and Torpedo, having entered the Premier League, will try to strengthen their squads and will not refuse the services of an experienced scorer. BUT Alexander Kerzhakov could well call Artyom in “Nizhny Novgorod”.

One thing is clear: it’s too early to finish Dzyuba. He is still able to benefit at the RPL level. So he will have no problems with employment.

Russian-Ukrainian War” Zelensky: The Ukrainian army has “broken the spine of the Russian army” and will not be able to stand up in the next few years | International | Newtalk News