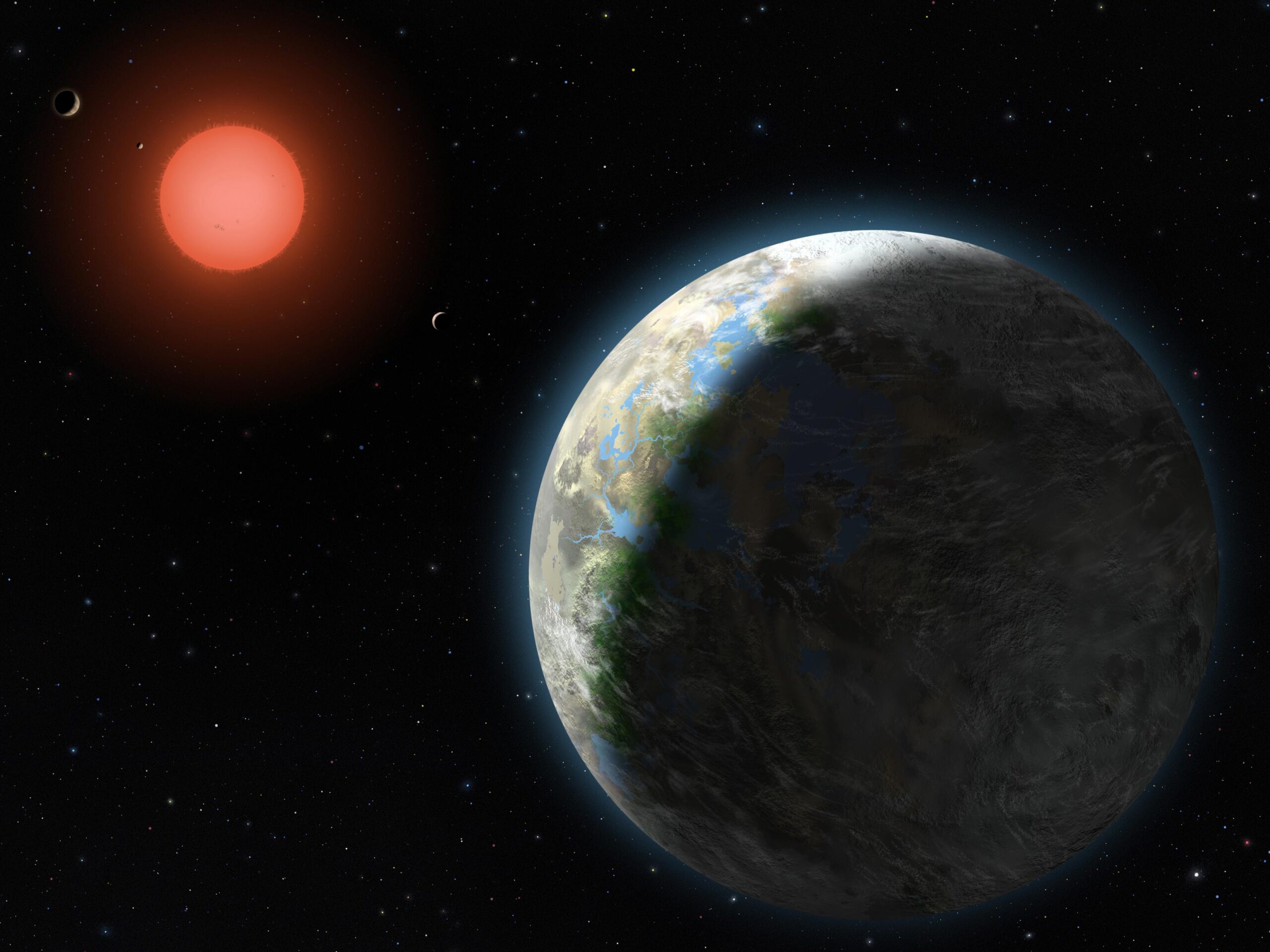 All stars have in common – they obey the laws of physics

The solar system can be said to be a special solar system because it has a planet called Earth that is suitable for living things, but stars like the sun are not special at all in a way. This is because in this vast universe there are countless stars with temperatures and sizes similar to those of the sun. The birth of a star is one of the most frequent but important events in the universe’s 13.8 billion years of history. In this respect, the life of a star is very similar to that of a human being. Just as all humans grow and eventually die, the star also evolves over time and eventually meets its end.

Extremely bright stars like Betelgeuse consume a lot of energy in a relatively short period of time and unfortunately have a short lifespan, while stars such as the invisibly dark Gliese 581 red dwarf glow weakly for a long time and have a very long lifespan. live the

An image of the red dwarf Gliese 581 (red star) and the inner four planets of the system. The planet on the right is the Earth-like planet GJ 581g, which exists in the middle of the habitable zone and orbits its parent star in a cycle of 37 days. Gliese 581 is about 20 light-years from Earth. © Lynette Cook

For example, the initial mass of a star determines the minimum mass that can be a star. About 7% of our Sun’s mass, with an initial mass less than this, the star does not become a normal star and becomes a brown dwarf star that does not undergo hydrogen fusion at its core. The evolution of a star is also very dependent on its mass.

The larger the mass, the more complex the internal structure is because the range of elements that can be synthesized increases. According to calculations, a light red dwarf star weighing only 0.2 to 0.5 times the mass of the Sun could live for more than a trillion years.

The present age of the universe is 13.8 billion years, and the first stars were formed about 13.4 billion years ago. Therefore, among all the red dwarfs in the universe, no stars have reached the end of their lifespan. Also, a blue dwarf, known as the next evolutionary stage for a red dwarf, has not yet been discovered.

birth of a star

Stars (stellar) are formed from large interstellar molecular clouds (nebulae) of hydrogen, helium and other heavy elements and dust. Nebulae are extremely dense, millions of times the density of ordinary cosmic matter. When the nebula exceeds a certain critical mass (the Jeans mass), it will begin a process of runaway and contracting until another force stops it from collapsing.

For example, the greater the mass or density of a cloud, the smaller the size, and the lower the temperature, the lower the kinetic energy of the materials. As a result, the Wei Jeans mass is lowered, making it more prone to gravitational collapse, which in turn makes it easier for stars to form in the nebula.

During the contraction process, the cloud is divided into small parts (fragmentation), and in each part, the molecules dissipate the potential energy generated as they fall toward the stronger gravity in the form of heat. As the clouds get smaller, the gravity gets stronger, the radius of the nebula gets smaller, and the rotation speed gets faster according to the law of conservation of angular momentum.

Molecules in the cloud rotate around the area where gravity is strongest, forming a flattening disk of gas. It is the moment when stars are born. The accretion disk gradually swirls and falls toward the center of gravity, releasing elongated jets in both directions at the poles of the center of gravity. This form is what we call a protostar or baby star.

As molecules fall at the center of gravity, potential energy is accumulated in the form of heat, and as the mass increases, the gravity becomes stronger again. The stronger the gravity, the more molecules are attracted, and the temperature and density gradually rise. As the increasing internal temperature is transferred outward through convection, the protostar slowly begins to brighten.

At the same time, the surrounding molecular cloud scatters and the accretion disk goes through a pre-main-sequence star phase. This pre-main sequence star gradually contracts and releases gravitational energy, and the central core gradually compresses and the temperature gradually rises. When this temperature rises to a temperature where hydrogen fusion is possible (about 10 million K), fusion energy, not potential energy, is produced in the core.

The dust-enveloped pre-main sequence star HBC 1 has been captured by Hubble. © Hubble/ESA/NASA

The energy generated by nuclear fusion forms radiation pressure, preventing the movement of molecules from falling to the core and resisting gravitational collapse. When the radiation pressure and gravity are balanced, the protostar does not contract any more and begins to emit fusion energy produced in the core in the form of electromagnetic waves into outer space. The newly born star has entered the phase of a more stable main-sequence star. In other words, the main sequence stage refers to the evolutionary stage in which the nuclear fusion reaction of hydrogen occurs in the core of a star and occupies most of the star’s lifetime.

Although the amount of hydrogen decreases due to the nuclear fusion reaction, the average molecular weight also increases as the amount of helium increases. In order to have more pressure to support gravity, the core of the star will contract little by little, and the density and temperature will increase accordingly. As the temperature rises, the size of the star gradually increases, and the brightness of the star also increases accordingly. Depending on the mass of the star, the nuclear fusion reaction that occurs at the center changes, and the evolutionary stage after the main sequence stage is also significantly different.

The subsequent evolutionary process is very different depending on the initial mass of the star when it was born. In the case of a mass similar to the sun, after the main sequence phase is completed, stars with a similar surface temperature to the main sequence and larger radii and brightness enter the giant star phase, such as a red giant or a blue giant.

The core temperature of a red giant rises to about 100 million K, and elements greater than helium undergo nuclear fusion to produce carbon. When all of the helium is consumed, the core part contracts and the temperature rises further, causing carbon fusion, and in the end, oxygen is produced as a continuation of this process. Heavy elements produced by nuclear fusion sink toward the center of the star, and heavier elements accumulate in the star’s core, and the nuclear fusion reaction around the core becomes more and more active.

As the radiation pressure becomes stronger in proportion to the increasing gravity of the center, the star eventually swells even more than when it was a red giant, and the surrounding shell expands and brightens, but the surface temperature decreases. for very large stars In some cases, it evolves into a supergiant or a hyper-giant. In the case of a supergiant, the core temperature rises higher and even iron can be formed.

Death of a star – compact star

After going through four major stages of evolution, stars eventually begin to complete their long, long lifetimes. The end of a star is usually greeted by stars whose inner material density is overwhelmingly higher than that of ordinary stars, i.e., celestial bodies called clusters. These are largely divided into three or four types, usually white dwarfs, supernovae, neutron stars, and black holes.

As the star can no longer undergo nuclear fusion, the radiative pressure against gravity disappears, and the star’s core contracts rapidly. Depending on the density and mass of the center, it evolves into a white dwarf, a neutron star, or a black hole.

Difference Between Stars and Humans

By studying stars at various stages of evolution, physicists and astronomers have learned how stars that live in eternity evolve. Most stars evolve in the same stages, but each detailed evolutionary stage is different depending on the star’s mass. What makes a star different from humans is that most of its lifetime, evolution, and energy available to a star are already determined by its initial mass at birth.