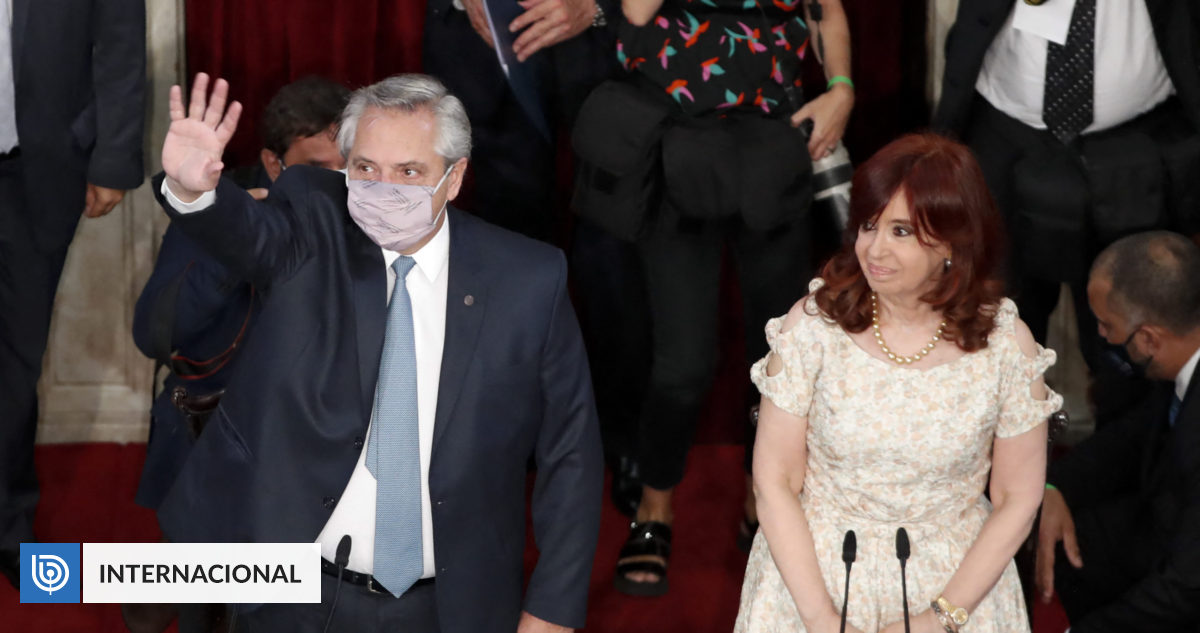 The vice president Cristina Fernández de Kirchner referred for the first time to the crisis unleashed within the national government to denounce that she is not going to “continue to tolerate the press operations that are made about me and our political space through the presidential environment through her spokesperson. ”.

In an extensive publication on her website, the vice president reported that she met with Alberto Fernández on Tuesday the 14th after “48 hours without contacting me and it seemed prudent to call him and tell him that I had to speak with him.”

“I deliberately let 48 hours pass, to see if he called,” said Cristina. At the meeting, Cristina told the president “that it was necessary to relaunch his government and I proposed names such as that of Governor Juan Manzur for the Chief of Cabinet.”

In addition, she tells Fernández that she was the one who chose him as a face-to-face candidate, over herself and other options within Peronism.

“When I made the decision, and I do it in the first person singular because it was really like that, to propose Alberto Fernández as a candidate for President of all Argentines, I did it with the conviction that it was the best for my country. I only ask the President to honor that decision “, says CFK’s letter.

Cristina Kirchner said that this proposal should not be surprising because “on May 18, 2019, I proposed Alberto Fernández to all Argentines as a candidate for President of the Nation.”

“Why am I telling this?” Cristina continues. “Because I am not going to continue to tolerate the press operations that are made about me and our political space through the presidential environment through its spokesperson: Alberto Fernández wanted Dr. Eduardo De Pedro to be his Chief of Staff and it was me the one who disagreed. Mal could now promote him to that position ”.

Cristina reproached the government for the attitude they took after the PASO: “The day after such a political catastrophe, one listened to some officials and it seemed that nothing had happened in this country, feigning normality and, above all, screwing on the armchairs” .

“Do you seriously believe that it is not necessary, after such a defeat, to publicly present the resignations and that the attitude of the civil servants to facilitate the President’s reorganization of his government is separated?”, Claimed the head of the Frente de Todos.

“Once again I address my compatriots as I have done on other occasions. It’s not the first time. Almost a year ago, on October 26, 2020, I was addressing Argentines with the document “October 27. Ten years without him and one of the electoral triumph: feelings and certainties ”.

There he shelled out reflections about the institutional functioning, and what I consider to be the central problem of the Argentine economy and the need to approach it from a broad agreement of the different political forces.

Today, I reread those lines of unusual actuality in which I also mentioned that decisions in the Argentine Executive Power are always made by the President of the Nation and in which I said without euphemisms or press-off operations, that there were officials who did not they worked.

I also remember the act that took place in the Unique Stadium of La Plata on December 18, 2020, in which many colleagues from the Frente de Todos participated together with the President of the Nation, when I stated verbatim: “… but be careful, I do not want that growth – the economic growth of the year 2021 that the comrade who had preceded me in the use of the word correctly predicted – to have only three or four alive. For this, it seems to me that salaries and pensions must be aligned, obviously, prices, especially food and fees. ”. On that occasion I also pointed out: “that’s why I say to all those who are afraid or who are not encouraged, please… there are other occupations besides being a minister, minister, legislator or legislator. Go find another job,

As I am not a liar and much less a hypocrite (I never say in public what I do not hold in private and vice versa), I must mention that during the year 2021 I had 19 work meetings in Olivos with the President of the Nation. See you there and not at the Casa Rosada at my suggestion and with the intention of avoiding any kind of speculation and media operation of institutional wear and tear.

In the first 18 meetings, the last one on 09/07/2021, I always raised the President with what constituted a delicate social situation for me and which resulted, among other things, in salary arrears, lack of price control -especially in food and remedies- and lack of work, without ignoring, obviously, the impact of the two pandemics: the macrista first and the health one 99 days after taking office. Likewise, I always stressed the lack of effectiveness in different areas of government.

I also believed that a wrong fiscal adjustment policy was being carried out that was negatively impacting economic activity and, therefore, society as a whole and that, undoubtedly, this was going to have electoral consequences. I did not say it once … I got tired of saying it … and not only to the President of the Nation. The answer was always that it was not like that, that it was wrong and that, according to the polls, we were going to win the elections “very well”. My answer, invariably, was “I don’t read polls … I read economics and politics and I try to see reality.” A reality that told me that in 2015 we lost the presidential elections in the second round and by little difference, with the highest salary in dollars in Latin America -which represented more than double the current salary-,

I was, I am and I will be a Peronist. That’s why I thought we couldn’t win. And he was telling it not only to the president. Many colleagues and many colleagues listened to my fears.

On Sunday, September 12 of this year, Peronism suffered an electoral defeat in unprecedented legislative elections. As I write these lines, I have the television turned on but muted and I read a graph: “Alberto jaqueado por Cristina”. No, its not me. As much as they try to hide it, it is the result of choice and reality.

It is even more serious: in the Province of Buenos Aires, an inexcusable thermometer of the social and economic temperature of our country, last Sunday we were left with 440,172 votes from those who obtained Citizen Unity in 2017 with our candidacy for the Senate of the Nation … with Peronism divided, with no national or provincial government to support it, and with the government of Mauricio Macri and his judicial panel persecuting and imprisoning former officials and owners of opposition media left and right.

I remember that, when we lost the legislative elections in the Province of Buenos Aires in 2009, with Nestor as a candidate for National Deputy -after the 125 and the global crisis of 2008-, whom Alberto rightly considers the best president of democracy On the Monday following the elections, he not only resigned from the Justicialista Party, but I, as President of the Nation, asked for the resignation of whoever was my Chief of Cabinet, among others. And beware!… We had lost in the Province of Buenos Aires but we had won at the national level. Nestor Kirchner must be remembered in the full and unedited version.

However, now, the day after such a political catastrophe, one listened to some officials and it seemed that nothing had happened in this country, feigning normality and, above all, screwing around in the armchairs. Do you seriously believe that it is not necessary, after such a defeat, to present the resignations publicly and that the attitude of the civil servants is separated from facilitating the reorganization of his government for the President?

On Tuesday the 14th, my last meeting with the President of the Nation took place again in Olivos. 48 hours had passed without him communicating with me and it seemed prudent to call him and tell him that I had to speak with him. Deliberately let 48 hours pass to see if I called (I must say that of the 19 meetings, most were my initiative). There I told him that it was necessary to relaunch his government and I proposed names such as Governor Juan Manzur for the Chief of Staff. I know that my proposal will surprise, it is public and notorious the differences that I have had with who was my Minister of Health since 2009, when I had to remove who was then my Minister of Health due to the failure to address the pandemic influenza A (H1N1).

Although in reality, no one should be surprised by my proposal: on May 18, 2019, I proposed Alberto Fernández to all Argentines as a candidate for President of the Nation.

Why am I counting this? Because I will not continue to tolerate the press operations that are carried out on me and on our political space through the presidential environment through its spokesperson: Alberto Fernández wanted Dr. Eduardo De Pedro to be his Chief of Staff and I was the one who disagreed. Mal could now promote him to that position.

For the same reason, I contacted the Minister of Economy when it was falsely reported that in the meeting I had with the President of the Nation, I had asked for his resignation. The operations are permanent and eventually only end up wearing down the government. It is incredible that they do not notice it. It’s a shame so much self-harm.

I sincerely trust that with the same strength and conviction that he faced the pandemic, the President will not only relaunch his government, but will also sit down with his Minister of Economy to look at the budget numbers. Last year, when it was presented, it was established that the fiscal deficit would be 4.5% of GDP without a pandemic as of March 2021 – a situation that was not verified as it is public and notorious.

Each point of GDP today is around $ 420 billion. As of August of this year, four months after the end of the year and with just a few days before the elections, the accumulated deficit executed this year was 2.1% of GDP. According to the budget forecast, 2.4% of GDP remains to be executed… more than double what was executed and with only four months remaining to end the year… with a pandemic and a very delicate social situation. I am not proposing anything crazy or radical. On the contrary, I am simply collecting what in this global context of pandemic is happening throughout the world, from the United States, through Europe and in our region as well: the State mitigating the tragic consequences of the pandemic.

He has been president for two consecutive terms. In 2008 we had to go through the biggest global crisis after the Great Depression of the year ’30. We withstand permanent exchange rate runs – with much less reserves in the Central Bank than at present – and the siege of the Vulture Funds. I know that governing is not easy, and Argentina even less so. Until a vice president who was declared opposed to our government suffered. Argentine men and women rest easy … that will never happen with me.

When I made the decision, and I do it in the first person singular because it was really like that, of proposing Alberto Fernández as a candidate for President of all Argentines, I did so with the conviction that it was the best for my country. I only ask the President to honor that decision… but above all else, taking his words and convictions as well, what is more important than anything: that he honor the will of the Argentine people. “