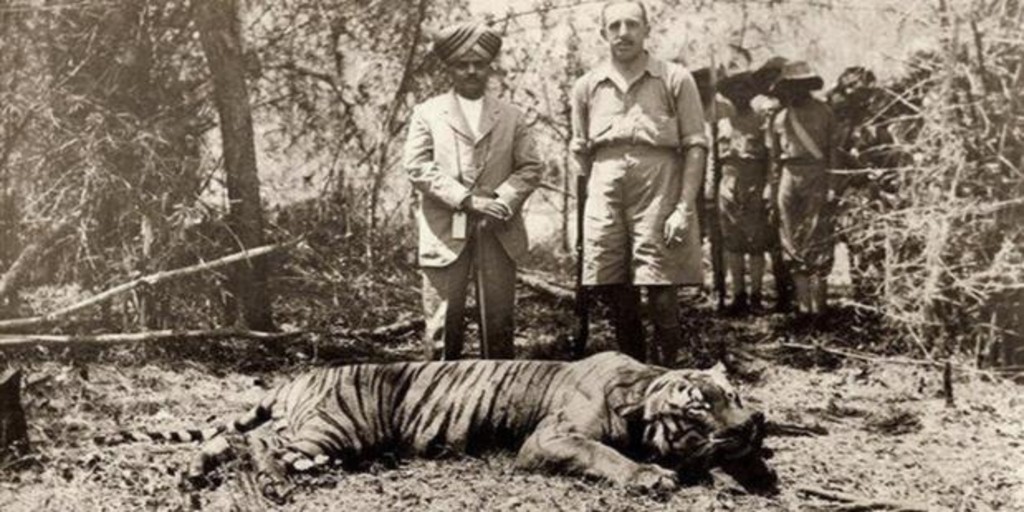 In this curious graphic document, His Majesty King Don Alfonso XIII poses next to the Mysore marajá before an old and huge male tiger, in a hunt in India in 1933.

Today there are very few tigers in that country. They were poisoned, tricked, cepeados and annihilated by the infamous poachers until almost extinction. The sport hunt could have saved them, but there was no option. Protecting a hunting species seems contradictory, but it is not, and I will try to explain it.

Tigers abounded at the time of British rule (the Raj) in India. The marajás took care of them and any act of poaching was punished even with the death penalty. The territories that controlled the marajás under the iron British laws of defense of the hunting and the nature were authentic paradises of the fauna in which the tiger was roaming freely, in exchange for some dozens of old males that had reached the end of their life cycle, which were charged every year in spectacular hunts.

A dishonor
Females, young specimens and young were not hunted, and any tigress killed by mistake was a dishonor.

In the last year of the British colony, 1947, it is estimated that between 40 and 50,000 tigers lived in the huge forests owned by Indian royalty. After the independence of England things began to get worse for the tigers. The prosoviético Government of Prime Minister Pandit Nerhu, within his policy of redistribution of the land, expropriated most of his possessions to the marajás to give them to the people. The purpose of its agrarian reform policy was to create new cultivation irrigation and encourage livestock. And there began the disaster for the felines. Reconciling development needs with environmental protection has never been easy.

First it was the forests. Trees were cut down to make firewood and charcoal. Then the land was plowed intensively. Finally, the cattle decimated the grasslands, with which the great herds of Indian deer, barasingas, chitales, sambars, nilgais, were diminishing while a hungry population grew exponentially and persecuted them.

The incredible forests and game reserves of the marajás, the wonderful wildlife sanctuaries of the Raj era, were left in less than 20 years turned into deserts.

Lacking the wildlife to feed on, the tigers began hunting domestic cattle and the solution was found in strychnine. Soon the local tribes understood that, putting a few grams of poison in the liver of a dead cow, it was very easy to kill them. Thousands of tigers of all sex and age died indiscriminately poisoned.

The socialist government of Nehru gave little importance to the disappearance of some tigers that had been the whim of English and marajás, in front of the figures of growth of the national wealth, to present it to his friend the Soviet Union. The tigers were then only vermin that had to be exterminated.

In spite of everything, for 30 more years some adult males continued to be hunted sportively. This produced large revenues from hunting quotas that reached a few and reduced hunting reserves. In them, today converted into national parks and thanks to sport hunting, the last tigers of India survived. Until in 1977 hunting was banned in this country. At that time, only 4,000 tigers survived fighting for some land against a population of 800 million. Already without game reserves, guards, marajás, English or American hunters, the die was cast. The trophy fees paid by the salaries, weapons, vehicles and gasoline of the guards were no longer entered.

Chinese traditional medicine
As in the case of so many other species, such as rhinos, traditional Chinese medicine has taken advantage of this circumstance to meet the demand for tiger bone, which it considers an important restorative; fat, ideal for the relief of rheumatic pain; and mustaches, which, crushed, are supposedly a potent aphrodisiac. Its way of supply: poaching and illegal trade. Millions of Chinese, Koreans, Malays and Taiwanese are willing to pay for these tiger products more money than for gold.

A tiger began to be known as a «Toyota», because with what was obtained by a sack of its bones and offal it gave one of these cars to be bought, about $ 50,000 in countries where a monthly salary is $ 30 per month. Once in the black markets of Hong Kong, Korea, China or Taiwan, its price skyrockets.

In many countries the extermination has been total. The subspecies of beautiful and small jungle tigers of Burma, Sumatra, Java and Borneo, if not exterminated, were worryingly reduced.

Something luckier was the incredible Siberian tiger, the biggest cat on earth, with more than 300 kilos, almost 4 meters in length and long mane to withstand the harsh winters. He lived in eastern Siberia, in eastern Manchuria, in the area of ​​the Amur River that borders China and Russia, near the Pacific, just north of the city of Vladivostok. On the Chinese side of the border they were exterminated, but in the end the Soviet Union put the means to preserve the jewel that inhabited its forests; and today, about 500 survive in Russian territory, protected by “tiger patrols.”

The 50,000 tigers in India at the time of the great hunts of the marajás, in less than fifty years they remained in just 2,000. Protected in a few national parks, with the economic cost that this implies, today the population has grown somewhat. I wonder if a hunting management focused in a sustainable way on the conservation of the tiger would have been more effective. .