Gabriel Fernández, a Latino boy of only 8 years old, was tortured and killed in a chilling way. His story, to invite reflection to the entire world, has been told through a documentary that is available on Netflix. “The Trials of Gabriel Fernandez” addresses the crime of the child at the hands of his own mother and stepfather, a case that shocked the United States in 2013. In addition, it explores the failures and errors of the child protection system in the United States.

“The judgments of Gabriel Fernández”, In its translation into Spanish, shows from the same Superior Court of Los Angeles County, the trial followed to the mother of the child, Pearl Fernandezto the stepfather Isauro Aguirre and four employees of the Department of Child and Family Services (DCFS): Stefanie Rodríguez, Patricia Clement, Kevin Bom and Gregory Merritt.

Of this group, What happened with pearl fernandez? The mother of little Gabriel pleaded guilty to a charge of murder and an imputation added to the case, due to the torture suffered by the victim and the partner. The man received the death penalty in 2018 and Fernández, the life sentence, with no parole option; In addition, he was denied the possibility of appealing his sentence or filing any other legal claim related to the murder of his son.

That of Gabriel Fernandez It has been one of the cases of child abuse that has most outraged the community of Southern California and has reached the media throughout the country. Thanks to the production directed by Brian Knappenberger, now the world knows this story.

THE JUDGMENT OF PEARL FERNÁNDEZ

When Pearl Fernández and her partner Isauro Aguirre were found and detained, the Los Angeles prosecutor initially requested the death penalty for both of them. A grand jury accused them for murder charges and one special circumstance of torture. However, only Aguirre ended up facing the death penalty. Why was it different with the woman?

It was later learned that when the trial was conducted, Fernández was evaluated by clinical psychologist Deborah S. Miora, who concluded that she had a severely limited intellectual capacity that left her “virtually unable to use thought to guide her behavior and moderate her emotional reactions. “

It also came to light that the woman has depressive disorder, developmental disability, possible personality disorder and post-traumatic stress. He also claimed that she was abused by her mother and all previous romantic partners, including Aguirre, and raped by several men. 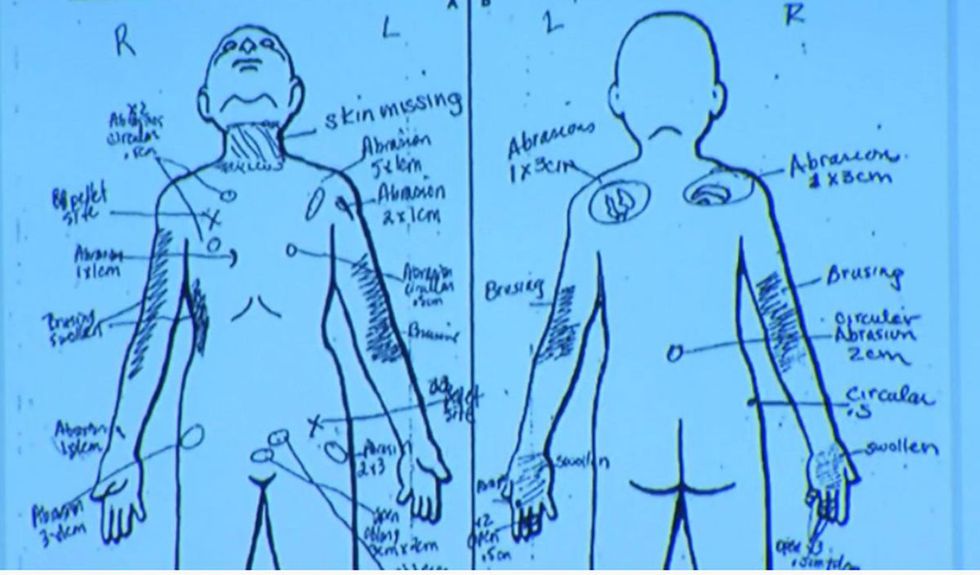 “Every inch of Gabriel was bruised and swollen. His skin was black and blue, ”said Emily Rebar, one of the nurses who treated the boy before he died. (Photo: Unvision)

Despite the results of her psychological evaluation and her statements, many family members and friends showed up to say that she was the one who abused the child. It even became known that he had a position of domestic violence against him.

Five years after the death of his son, Pearl Fernandez pleaded guilty of a charge of first degree murder and admitted the accusation of special circumstances of intentional murder by torture. So, the woman was sentenced to life imprisonment in June 2018. She is currently being held in the Chowchill State Women’s Prisona, a city located in Madera County in the US state of California.

The fact that he admitted to committing an intentional murder was crucial to save himself from death, since the main argument of Aguirre’s lawyer was that he was not guilty, or at least not guilty of what they claimed he was, because, although he committed these heinous acts, it was not intended to kill.

Before being sentenced, Pearl Fernandez He declared: “Every day, I wish I could make better decisions. I wish I had saved Gabriel.” 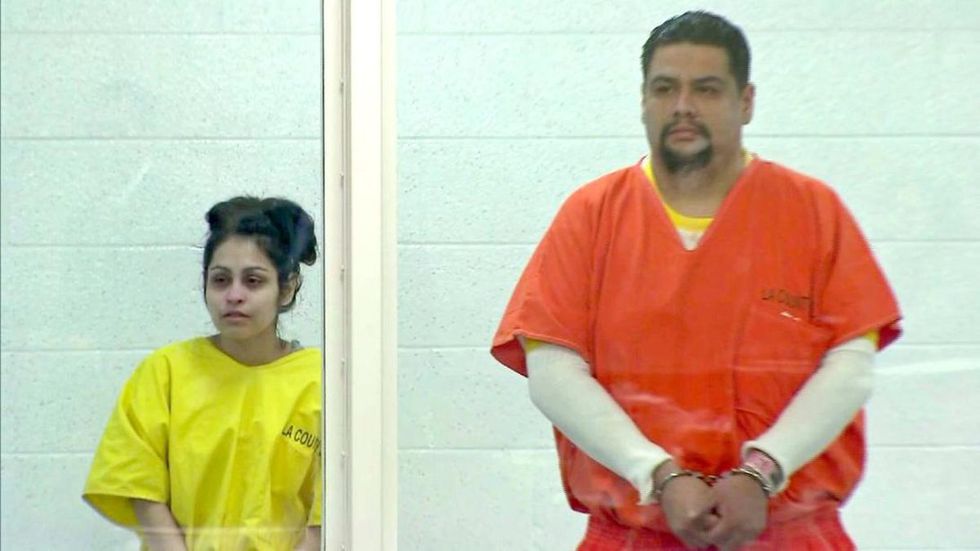 A grand jury accused Pearl Fernández and Isauro Aguirre on charges of murder and a special circumstance of torture. However, only Aguirre ended up facing the death penalty (Photo: YouTube)

WHAT ROLE PEARL FERNÁNDEZ PLAYED IN THE KILLING OF HIS SON?

On May 22, 2013, when the body of little Gabriel was found, Fernandez called 911 To report an incident, in the communication, he claimed that his son had hit his head with a dressing table. When the paramedics arrived at the place they found him unconscious, but they also discovered that his skull was cracked, he had three broken ribs, his teeth hit with a bat and his lungs and groin severely injured by pellets.

While he doesn’t know exactly what role the mother played the night they tortured little Gabrielito and although he pleaded guilty to having a role in the tortuous actions that resulted in his death, during the Aguirre trial, more abuses came to light, that were attributed to him and not her.

It was revealed, for example, that Aguirre tied, whipped and gagged Gabriel, and forced him to eat sand for cats and feces. And that Fernández was aware of what happened; In addition, they talked frequently through text messages about what made the child go by. Aguirre tied, whipped and gagged Gabriel, and forced him to eat sand for cats and feces. Fernandez was aware of what was happening (Photo: AP)

WHO WAS GABRIEL FERNÁNDEZ?

According to all the reports, the interviews in the series and the news after his death, Gabriel Fernández was, like most children, a sweet boy who liked to be useful and sought the love of his family. Before moving with his mother, Pearl Fernández, her boyfriend, Isauro Aguirre, and two brothers in Palmdale, north of Los Angeles, the boy lived from time to time among his relatives’ houses.

As the documentary describes it, before moving with his mother, Gabriel he lived with an uncle and his partner for a while Y Then he moved with his grandparents. The images of his time with his uncles show a seemingly happy and healthy child.

However, the child’s welfare took a radical turn in 2012, when Pearl Fernández welcomed him, according to reports, to obtain benefits; despite, however, that the rest of his family had already shown concern for her because they considered him to be negligent with his other children.

After joining his mother and his partner, Gabriel Fernandez He arrived at a new school. Shortly after starting there, her teacher, Jennifer Garcia, felt that things were not right. Garcia, who appears throughout the six-part series, reveals that a few days after entering classes in his classroom, the child asked him a question: “Is it normal for mothers to beat their children?”; but then came a more worrisome revelation: Gabriel asked if it was normal to be hit with a belt buckle. “Is it normal for you to bleed?” 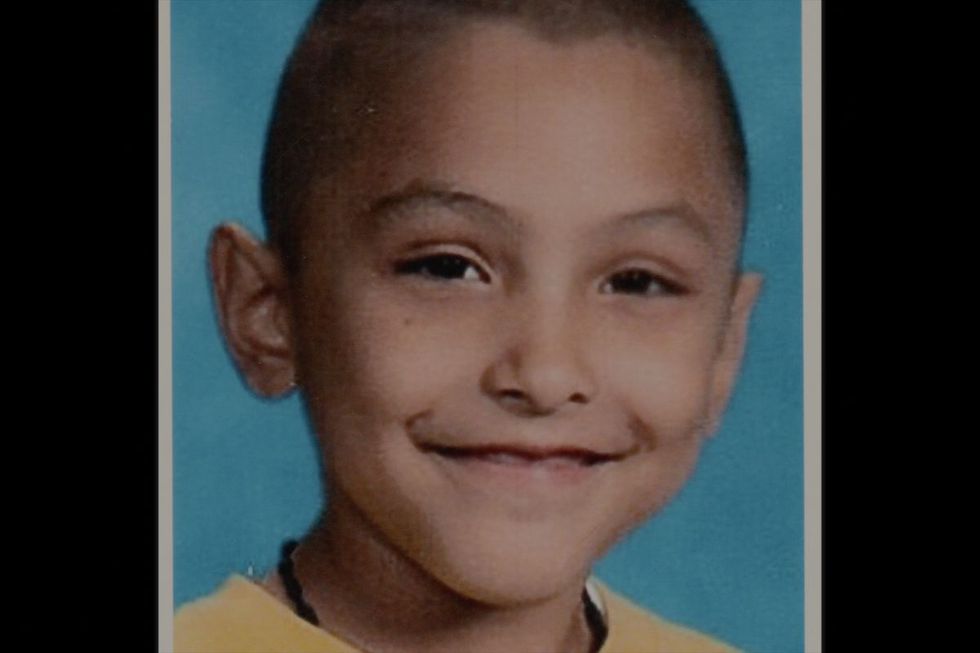 During the court hearings against the defendants it was revealed that the boy was the victim of a horrific list of physical abuse.

The series begins with an emergency nurse who tried desperately to save Gabriel Fernandez, revealing in tears what he witnessed when he was taken to the hospital. “He had a depressed skull fracture, which means he could feel his skull …,” she says.

“His was dented and could feel … as if it were crispy in his head. I remember that his throat looked like someone had burned it. Bruises and cuts all over your face. Black eyes, cuts everywhere … Only in every part of his body there was something, “he explains.

“He had pellets in his lung and groin, cigarette burns, put out cigarettes in him (…). I remember that night I thought I couldn’t understand this, how it came to this (…). There is so much trauma, so much damage and so many questions, ”he added.

The child arrives after the emergency call at a house in Palmdale, a city in Los Angeles County located about 100 miles north of the capital. There a family claimed that there was an unconscious child, but what seemed like a call for help in an accident ended in a very media case of abuse and murder of a child.

HOW TO SEE THE NETFLIX SERIES ABOUT THE CASE?

The documentary series “The Trials of Gabriel Fernández” It premiered on Netflix on February 26, 2020 and is composed of six episodes. You can follow it now and learn more details of this chilling story.

Netflix: The Trials of Gabriel Fernandez

Altered Carbon, will you have season 3 on Netflix?
Girl on the Third Floor: what does the end of the Netflix horror movie mean?
“I Am Not Okay with This,” characters: who is who in the Netflix series?

The CEPI is a remarkable institution. The most prominent members of this global vaccine initiative are Microsoft founder Bill...
Read more

more than 4,000 dead, curfew in Martinique and Guadeloupe

Medical personnel take a patient with Covid-19 on board at Austerlitz station in Paris. POOL New /...
Read more

Young people in solidarity with their elders

Will coronavirus lead to a shortage of condoms?

Closely linked to Southeast Asia, the condom industry is adapting to cope with disruptions in the region. In France,...
Read more

The CEPI is a remarkable institution. The most prominent...
Read more

The month of March has ended as largest audience...
Read more
Entertainment

Dad lied about coronavirus symptoms to visit his wife in the delivery room, the New York hospital says

William Gompertz: “An artist is anyone who creates something, from an engineer to a chef”