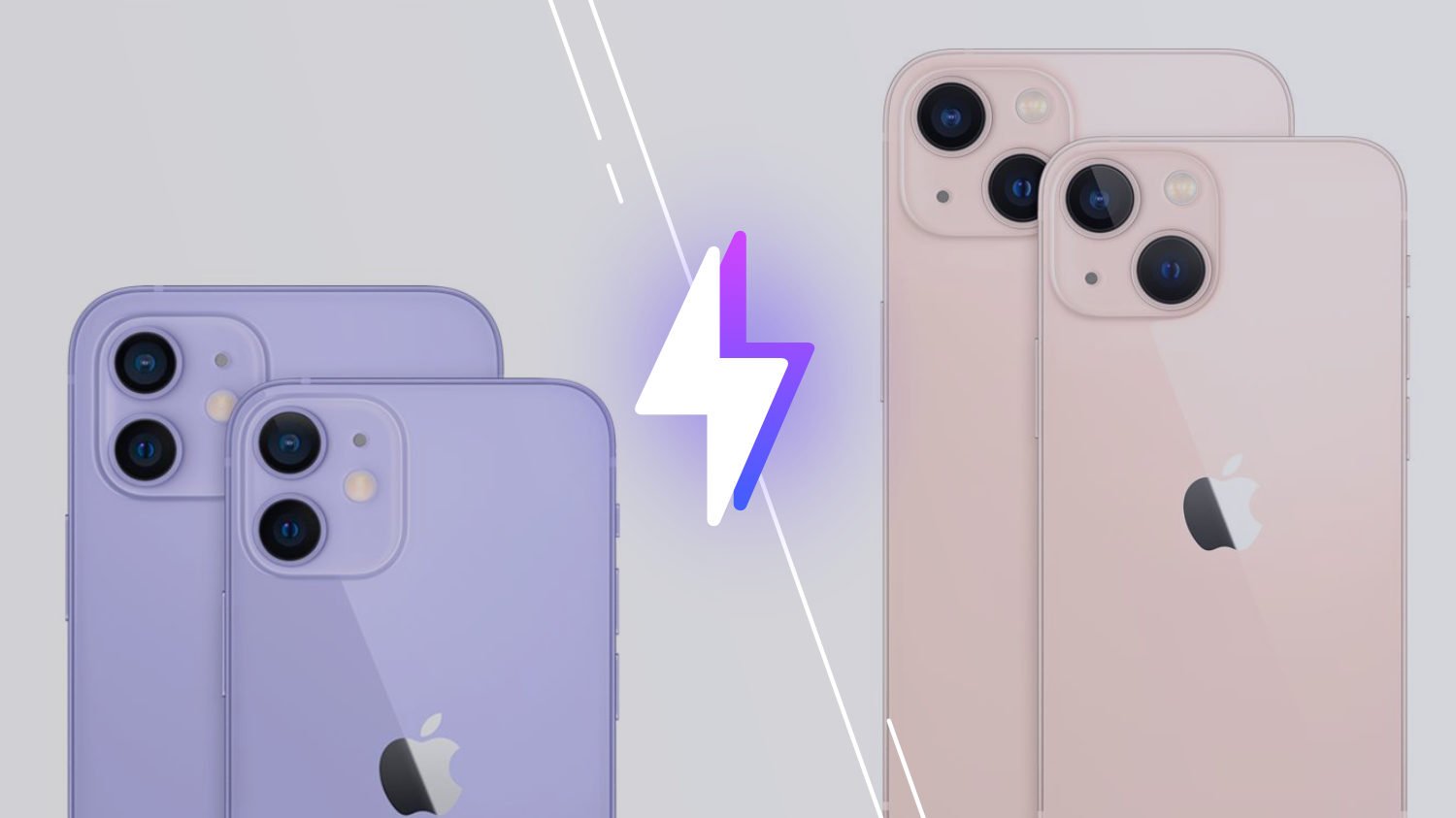 Should you buy an iPhone 12 (mini) or an iPhone 13 (mini)? It is a difficult choice. Here are all the elements at our disposal to help you choose. 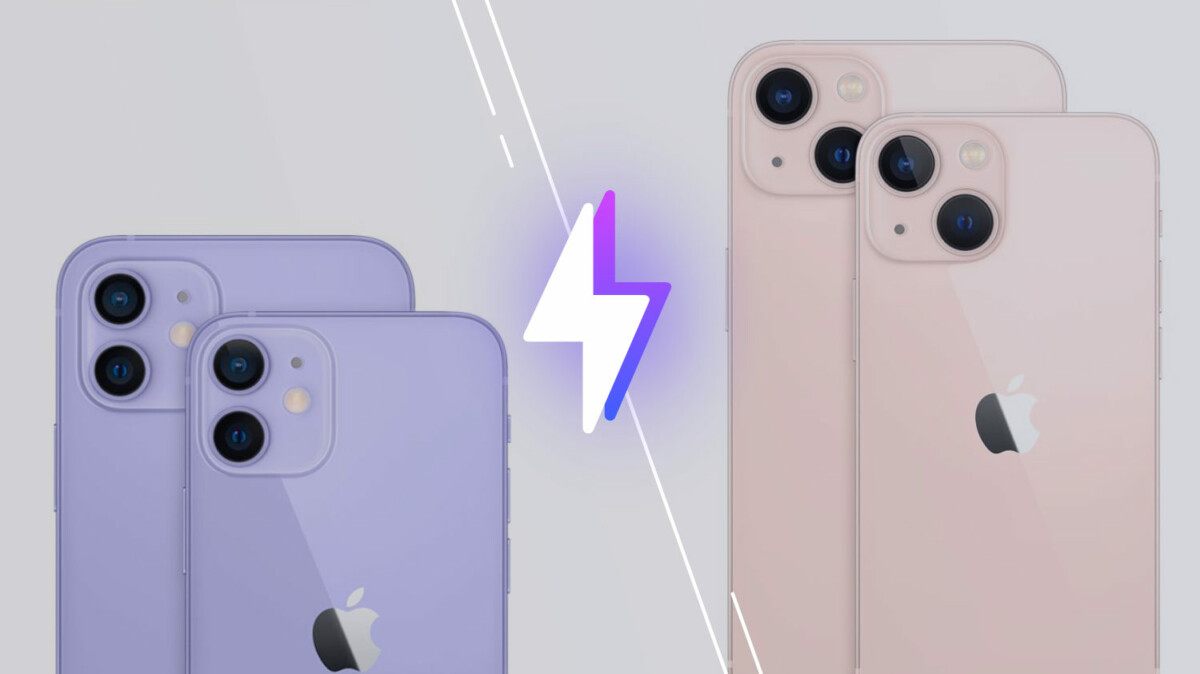 Apple has never had such a wide range of iPhones. The iPhone 11, iPhone SE, iPhone 12… are still on sale while the iPhone 13 and 13 Pro arrived. The differences between the last two generations of iPhones are not as large as one might hope, so it seems rather logical that you would hesitate between an iPhone 12 (mini) and an iPhone 13 (mini). Here’s everything you need to know before you crack.

If you missed the Apple keynote, you can find all the new features in our summary.

Big changes for the cameras

You are not dreaming, if we compare the data from the official technical data sheets of the rear cameras of the iPhone 12 and 13… they are the same figures.

However, if you take a good look at the visuals below, you will notice that these cameras are now arranged diagonally in the hump of the camera module. This change is not trivial. 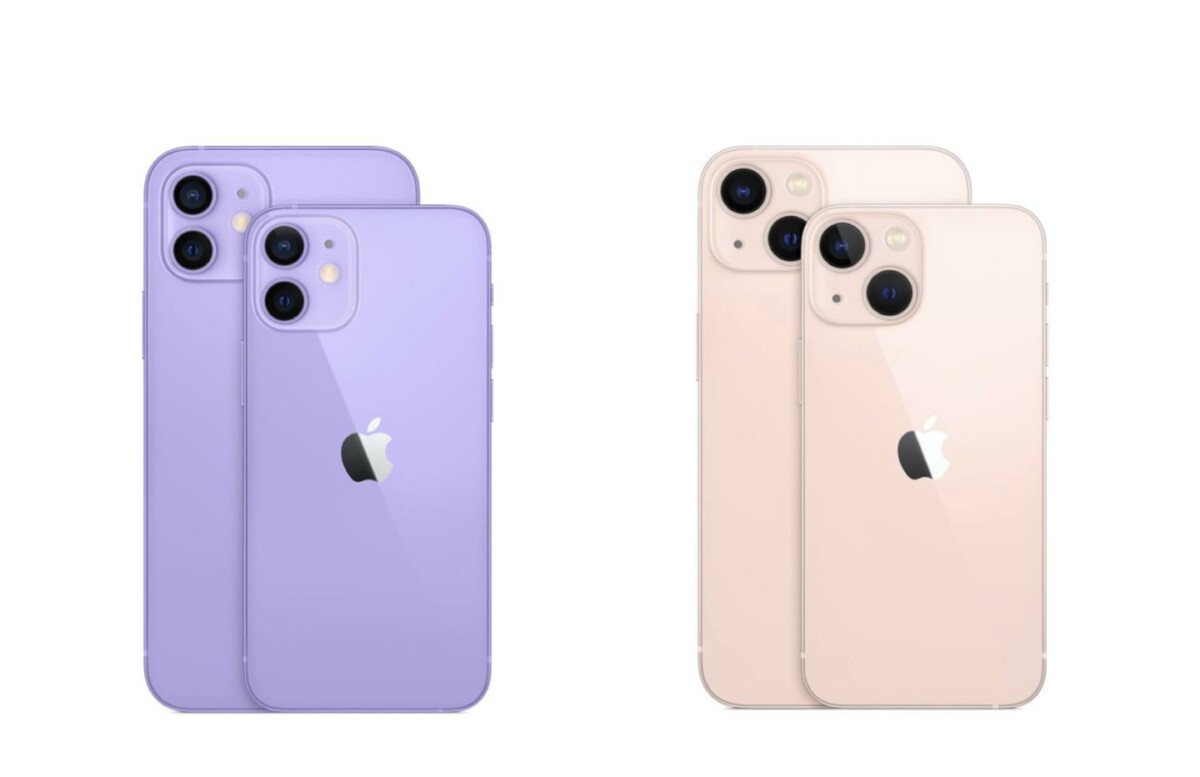 iPhone 12 on the left and iPhone 13 on the right

The cameras still have a 12-megapixel sensor, but they now have photosites 1.7 µm on the main camera (1.9 µm on the Pro version). In summary, Apple has increased the size of the sensor. The size of the sensor is a key factor in image quality because, along with the aperture of the lens, it determines how much light the camera is able to capture. The more light, the less noise and blur. For comparison, the iPhone 12 uses a 1 / 1.76-inch 12-megapixel main sensor with photosites de 1,4 µm.

Additionally, Apple has added Sensor Shift Optical Image Stabilization (IBIS), a feature first seen on the 12 Pro Max. This technology, borrowed from digital SLRs, gives better stability to the wide-angle sensor of the iPhone 13 and 13 mini, more effectively compensating for the wide and sudden movements of the user. It thus becomes possible to trigger for longer at equivalent sensitivity, in other words to capture more light without increasing noise. 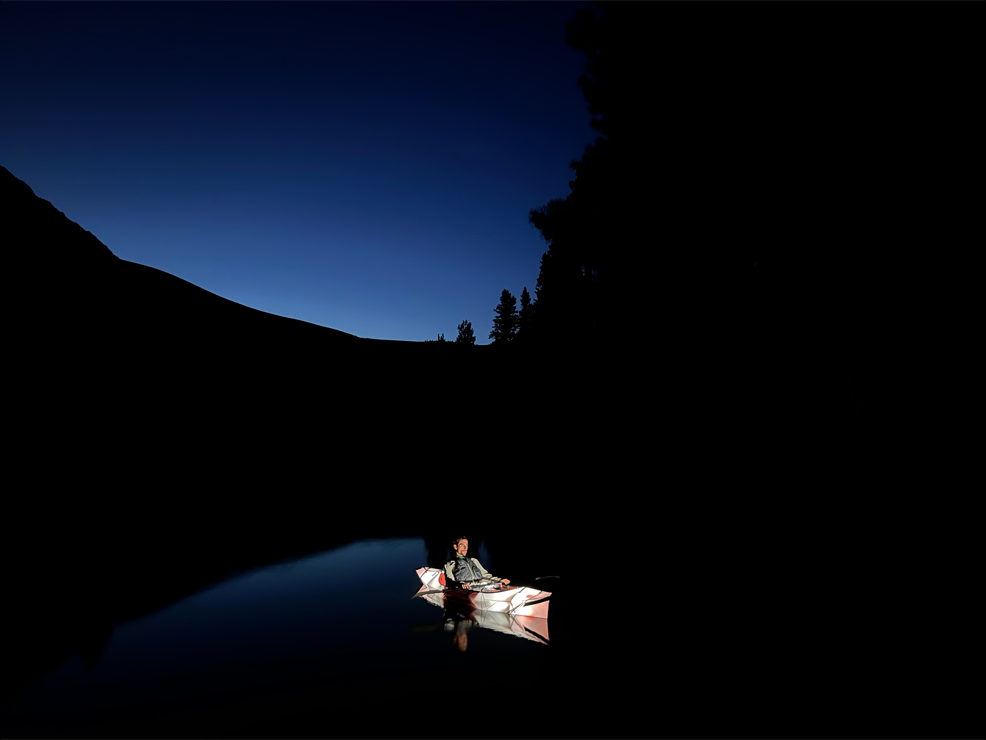 Example of a night photo with iPhone 13

It’s unclear exactly what hardware changes Apple has made to the iPhone 13’s ultra-wide-angle camera. Apple simply explains that it has a faster sensor who reveals more details in dark areas of your photos.

Apple introduced the fourth generation of its Smart HDR system. The latter must offer a more faithful rendering of colors and contrasts, even in the event of strong dynamics. And finally, there is a new feature called “Photographic Styles”. You still have several basic styles (standard, vibrant colors, high contrasts, warm colors), but you can then customize these different styles. Settings that you can save later.

A portrait mode in video

Portrait mode, named cinematic mode by Apple, now applies to video: HDR Dolby Vision, up to 4K at 60 fps. Like portrait mode in photo, you can now set the focus area automatically or manually, on the fly or in retrospect, in order to give more importance to a subject (human, animal or object). It is a very power-demanding mode that takes advantage of computerized photography.

A notch at speed and increasing brightness

Apple still hasn’t used a technology to replace its notch that houses the sensors needed for Face ID, its facial recognition technology. In the meantime, for the first time since the iPhone X, the notch has undergone a small diet. The screen therefore occupies a larger part of their facade, due to the fact that the notch is 20% smaller. 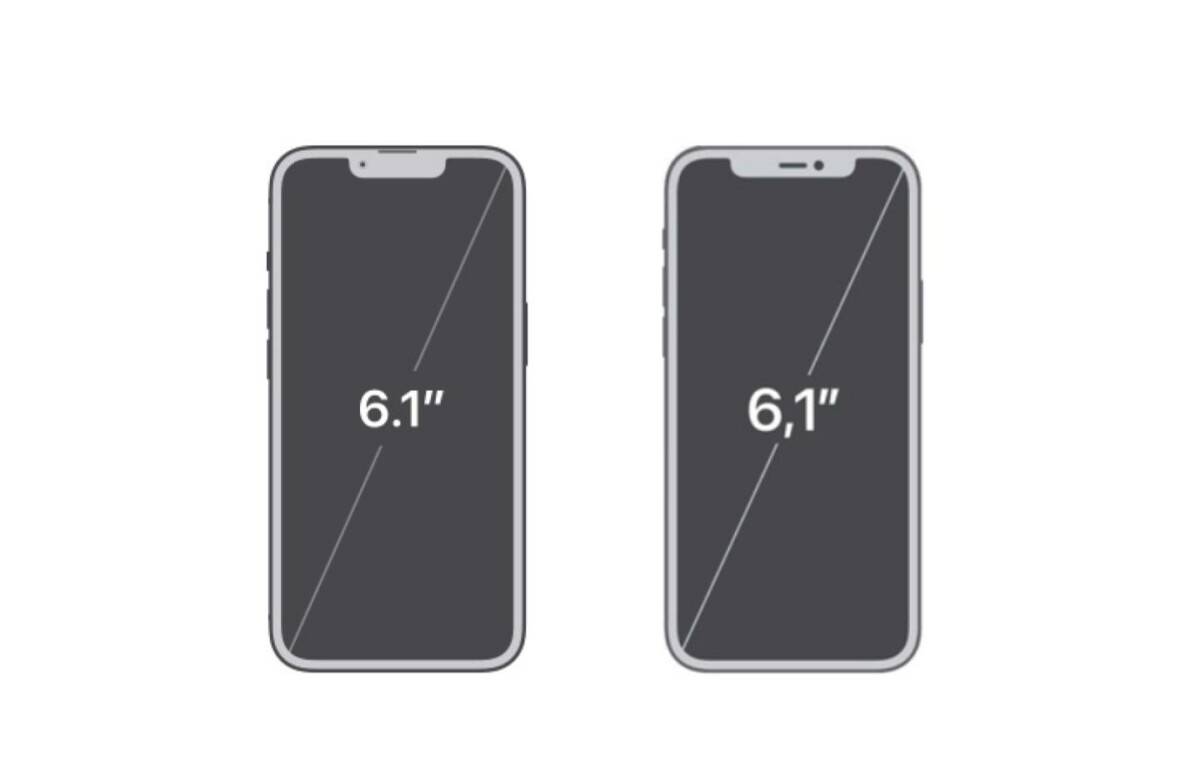 The notch is narrower, but higher

Regarding the performance of this screen, note that the maximum is now 800 nits in standard mode (against 625 nits on the iPhone 12) with a peak of maximum brightness of 1,200 nits in HDR (unchanged compared to the iPhone 12 ). For the rest, it is still an Oled screen blocked at 60 Hz. While the Pro take advantage of ProMotion which allows the refresh rate to be modified with an amplitude ranging from 10 to 120 Hz.

Twice the storage for the cheapest model

Apple has doubled the storage of the iPhone 13, the basic configuration offers 128 GB. The price difference between the iPhone 12 128 GB and the iPhone 13 128 GB is only 40 euros …

Do not hesitate to consult our price comparators (lower in the file), online traders can save you a few euros.

No change from wired fast charging (still 20 W), still MagSafe wireless charging (15 W / 7.5 W)… Fortunately, Apple has made an improvement in battery life. The iPhone 13 mini would provide 1 h 30 more autonomy compared to the 12 mini, while the iPhone 13 would add 2 h 30 compared to the iPhone 12. As usual, Apple does not communicate the capacity of the devices. batteries nevertheless… they are bigger than the old ones.

Indeed, the new iPhone 13 are thicker and heavier than the iPhone 12.

The dimensions and weight of iPhone 13 mini and iPhone 13

The dimensions and weight of iPhone 12 mini and iPhone 12

IPhone 13s are available in red, white (starlight), midnight, blue, and pink. The new color is pink which replaces the green color of the previous generation. Note also the absence of the purple color that was launched later. 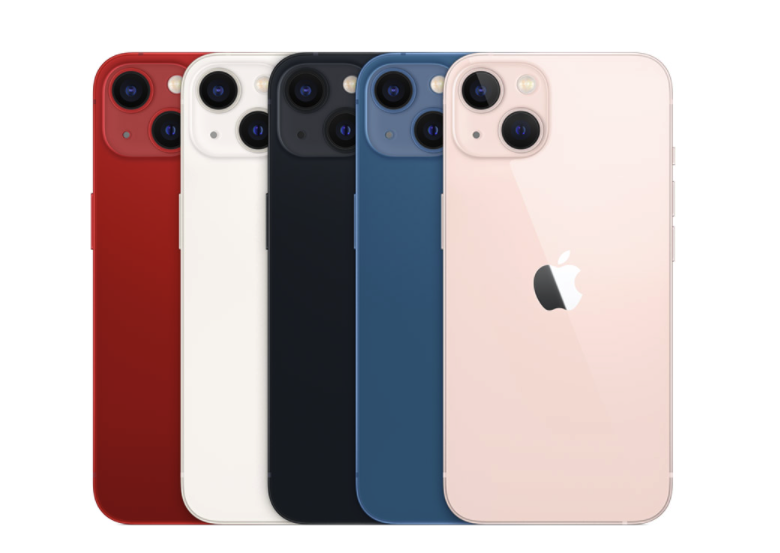 Here are all the colors of iPhone 13

As a reminder, the iPhone 12 is available in black, white, red, green, blue and purple. 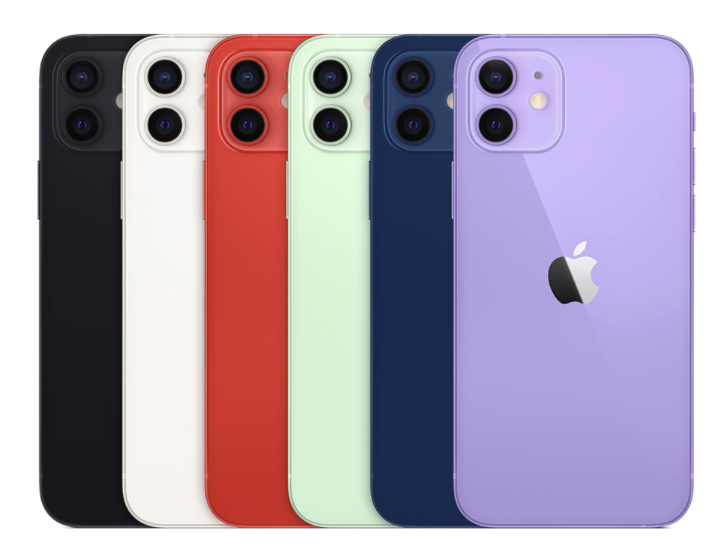 It’s no surprise, the iPhone 13 benefits from the new Apple A15 Bionic SoC. But… Apple did not provide a comparison with its predecessor, the A14 Bionic. It is clear that the two chips must be very similar.

If you plan to buy a model mini, our advice is to direct you to theiPhone 13 mini. Why ? Battery life is the main drawback of the iPhone 12 mini, it can be prohibitive for many of you. It is really too tight on a daily basis on the 12 mini.

If you hesitate betweeniPhone 13 and the 12… The differences are not significant between the two generations of iPhone. Ultimately, your choice will largely depend on the price you’re willing to put into your new phone. The few tens of euros of difference do not weigh the same for everyone. With an iPhone 11 at 589 euros in the area, it’s a difficult dilemma that awaits you.