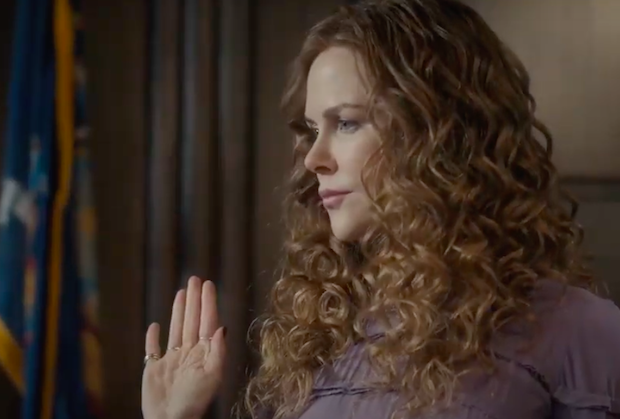 When it comes to tying up loose ends, The Undoing had more ground to cover in Sunday’s series finale than one of Grace Fraser’s marathon evening strolls. At the top of the HBO thriller’s closure-filled to-do list: Who killed Elena Alves? Coming in a close second: How many pieces from Grace Fraser’s celebrated 2020-21 winter coat collection would turn up during the 70-minute swan song?

Yep, it was Hugh Grant’s prime suspect — and not Lily Rabe’s Sylvia, as most TVLine readers incorrectly guessed — who perpetrated the heinous crime at the center of the six-episode whodunit.

Of course, a bunch of bananas stuff happened in advance of the big reveal, beginning with the fallout from Grace (Nicole Kidman) discovering the murder weapon in son Henry’s violin case. “The Bloody Truth” picks up right where the penultimate hour left off, with a slack-jawed Grace clutching the elusive sculpting hammer as Henry looks on in terror. The kid immediately proclaims his innocence, insisting that he found it inside the outdoor firehouse at the family’s beach house. And he hid it to protect his dad.

Jonathan denies everything (for the umpteenth time), positing that Elena’s husband Fernando planted the weapon in an attempt to frame him. He later goes so far as to suggest that maybe Henry was in possession of the hammer because he killed Elena, especially after learning that his son put the evidence through a dish washer not once but twice. The mere suggestion infuriates Grace — and Henry.

Jonathan’s lawyer Haley recommends everyone keep their traps shut about the hammer because it’ll essentially be “game over” for Jonathan if word gets out.

The next day, Jonathan takes the stand in his murder trial. He charmingly maintains his innocence, and explains that he truly loved Elena. Furthermore, her son, Miguel, was like a son to him. He would never inflict harm on either one. And the reason he fled town the next day? He panicked.

However, while being cross-examined by the prosecution, Jonathan is at a loss to explain why he took the suit he was wearing that night to the dry cleaners.

During a break in the trial, Grace asks BFF Sylvia to join her on one of her famous walks, during which she asks her bestie a favor, one we are not immediately privy to (although we’re led to believe it might have something to do with her spilling secrets to the prosecution in an effort to seal Jonathan’s fate).

Back at the trial, Haley calls Miguel to the stand in an attempt to poke holes in his dad’s alibi. She succeeds in doing that and in amplifying Fernando’s motive. Grace later insists that she take the stand. She vows to defend Jonathan. Jonathan is elated, and Haley OKs it.

Grace initially keeps her word, imploring to the jury that Jonathan “could not have done this,” adding that he is, at his core, “a healer. He cures children of cancer…. The idea that he would take [a life] is untenable. He is a gentle man.”

During cross, however, the prosecution gets her to admit (with a little help from audio of her 911 call) that she feared for her life when fugitive Jonathan showed up at their beach house. The attorney also gets Grace to reveal damning details regarding the death of Jonathan’s sister — specifically, that he allegedly, per his estranged mother, “suffered neither guilt nor grief” in reaction to his role in sib’s death.

Basically, Grace takes Jonathan down, with a little help from Sylvia’s loose lips. His conviction seems all but certain. And Jonathan knows it.

Moments after leaving the courtroom, Haley whispers to an indignant Jonathan that it’s his own damn fault for — wait for it — not getting rid of the murder weapon. It’s in that moment that we learn that, yes, Jonathan killed Elena. And Haley was aware of it all along! What the muck?!

Subsequent flashbacks to the crime confirm all of this. And it’s gruesome.

The next day, Jonathan — who’s not even hiding his crazy now — essentially kidnaps Henry. And during the subsequent police chase, he pulls the car over in the middle of a bridge and briefly considers jumping off. He changes his mind when he sees Grace running towards him. He’s quickly handcuffed and taken away as mother and son ‘copter off to safety.

What did you think of the grand finale? Did you correctly guess whodunit? Grade the episode (and the series as a whole) below, and then hit the comments with your snappy judgements. Oh, and in case you are wondering, there will not be a second season. This truly was a limited series (read more here).