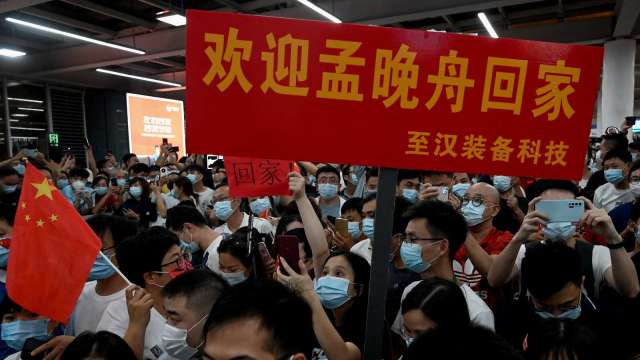 After the release of Meng Wanzhou, the daughter of Huawei’s chief financial officer and founder Ren Zhengfei, the United States met one of China’s key requirements for improving relations, paving the way for relations between the two countries, but at the cost of making the outside world criticize “hostage diplomacy.” The Beijing authorities benefited.

Meng Wanzhou reached an agreement with the United States to postpone the prosecution to resolve criminal charges related to U.S. sanctions on Iran. A few hours later, China released two Canadian citizens, Michael Kovrig and Michael Spavor, who were arrested a few days after Meng Wanzhou’s arrest in December 2018.

Two weeks before the agreement, Biden called Xi Jinping to express frustration with Beijing’s linking progress in climate change with other requirements, including the release of Meng Wanzhou and the lifting of sanctions and punitive tariffs. China has always insisted on the need for the United States to take the first step to improve relations between the two sides, pointing out that “the United States should meet China halfway.”

The agreement on Friday (24th) seems to be moving in this direction. This is the biggest step the United States has taken in years to ease relations with Beijing. With the support of the two parties in Washington, the United States has implemented a series of punitive measures against China. Although there are still many unresolved issues, one of the biggest stumbling blocks to further cooperation has now disappeared.

Wang Huiyao, founder and chairman of the Globalization Think Tank (CCG), a policy research organization, said that this is a very important move, symbolizing a new starting point for China and the United States. Next, the two sides will definitely cooperate on climate change and tariffs.

Shi Yinhong, director of the American Studies Center at Renmin University of China, said that there are signs that the two sides no longer want the situation to escalate, but it is unlikely that they will be downgraded. Both sides are trying to freeze the level of tension, which will continue for a long time.

For China, in addition to the insults caused by the arrest of such a high-profile figure, the case is also shocking because it demonstrates how the United States can unilaterally impose sanctions on competitors and prevent other countries from conducting normal business activities. China has also passed relevant legislation to provide more tools to respond to US sanctions in the context of increasing competition between China and the United States.

Bill Hagerty, a Republican senator from Tennessee in the United States and former ambassador to Japan, accused Biden of adopting a policy of “tolerance” in the face of China’s “hostage diplomacy.”

China has long stated that the so-called “hostage diplomacy” is “completely groundless,” saying that anyone who abides by Chinese laws should not be afraid of being arrested. However, the Chinese authorities’ broad definition of national security in the territory and even in Hong Kong has brought risks to foreign-funded enterprises.

At least for now, business organizations are very happy to see this diplomatic dispute resolved, even though they have noticed the lasting damage.

Noah Fraser, Managing Director of the Canada-China Business Council, said, “With the end of this incident, business leaders in Canada and China will have more worries or fears than ever before, but this is the first necessary step on the road to rebuilding confidence. step.”