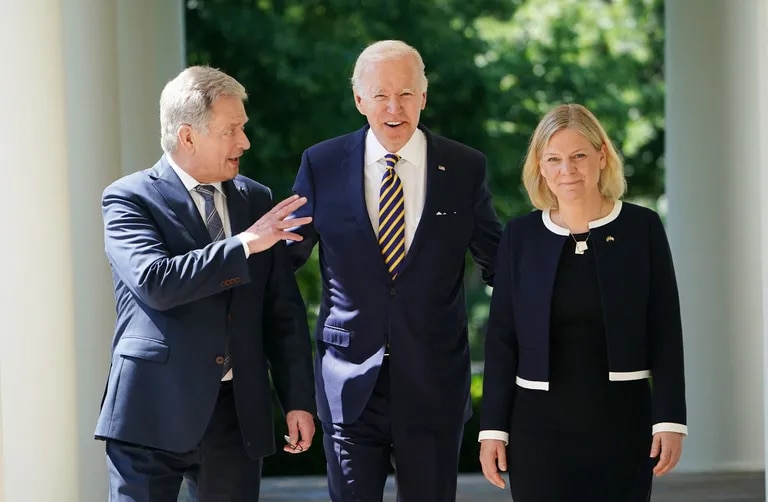 WASHINGTON.- Almost three months after the start of the war in ukraine, The United States stepped on the accelerator and revealed this Thursday signs of a much greater commitment to the development of the conflict. On the same day, the head of the Joint Chiefs of Staff, Mark Milley, spoke for the first time since the invasion with his Russian counterpart, Valeri Gerasimov; the North American Congress approved an extraordinary aid package of 40,000 million dollars for Ukraine, and the president Joe Biden received the leaders of Sweden and Finland to endorse their candidacy for NATO membership.

Milley and Gerasimov, Generals in Chief of the United States and Russia, “discussed various security concerns”said the spokesman for the US Joint Chiefs of Staff, Dave Butler.

The Russian Ministry of Defense had reported in a statement that the two high command had spoken at the request of the American, with whom they discussed various issues, including the situation in Ukraine. But both agreed not to divulge the content of their conversation.

The last time they had spoken was on February 11, when Washington publicly warned of Russian plans to invade Ukraine and hoped that its warnings would dissuade Moscow from proceeding.

US Secretary of Defense Lloyd Austin and Russian Defense Minister Sergei Shoigu had also spoken by phone on May 13, when Biden urged Moscow through Austin to implement an “immediate ceasefire.”

But neither the high-level talk in February nor the one last week deterred the Russians from giving up their expansionism over Ukraine. Moscow is now concentrating its offensive in the east of the country, where it aspires to conquer the Donbass region, in which the provinces of Donetsk and Lugansk are located.and that the Kremlin declared as the objective of a new phase of the invasion, after withdrawing the troops it had deployed around kyiv.

For days, some of the hostilities in Donbass have focused on the city of Severodonetsk, in Lugansk province, which is “practically surrounded” by Russian forces, according to its authorities.

Washington added to these channels of dialogue a measure of strong significance for the rest of the contest, Congress approving an astronomical $40 billion aid package for Ukrainein another demonstration of the strong support promised by Biden.

The aid, which includes macroeconomic and humanitarian objectives, as well as weapons and ammunitionwas approved by a large majority in the Senate after its approval in the House of Representatives last week.

But Ukraine’s coffers, worn out by conflict, received another accolade at the meeting held in Germany by the G-7 economy ministerswhich brings together seven major world economic powers.

Gathered in the city of Königswinter, the representatives of the G-7 (United States, Japan, Canada, France, Italy, Great Britain and Germany) worked on a new round of financing for the Ukrainian budget.

Of the enormous US aid, some 7.5 billion dollars should go to the country’s budget in the short term. For its part, Germany announced a contribution of 1 billion euros ($1.06 billion).

“We are collecting the different pledges of direct aid to continue financing the state functions of Ukraine with our means”said German Finance Minister Christian Lindner, whose country chairs the G-7 this year.

The most urgent thing is to provide liquidity to Ukraine for the current quarter. Close to 10 billion dollars was expected in this new round of aid, for a total of more than 18 billion so far in 2022. kyiv estimates that it needs about $5 billion a month.

“Ukraine needs our help and it needs it now,” US Treasury Secretary Janet Yellen said upon arrival in Königswinter, outside Bonn. In the longer term, discussions regarding the reconstruction of Ukraine “have only just begun,” Yellen stressed.

The war launched by Russia should cause a massive contraction of the Ukrainian economy, which the World Bank estimates at 45%, and there is talk of the possibility of using Russian assets frozen by Western sanctions.

Germany believes that it is a “politically conceivable” scenario, but stressed, like France, that there are many legal obstacles. “We have to carefully examine the limitations imposed on us,” the French Economy Ministry said.

The growing commitment of the United States was also seen at the highest level, in the White House, where Biden received the Prime Minister of Sweden, Magdalena Anderssonand the President of Finland, Sauli Niinistöto express their absolute support for their accession to NATO.

The Biden administration is optimistic about its requests to join the alliance, which would be a major setback for Russia after its invasion of Ukraine, which it justified to prevent kyiv from joining.

“They meet all NATO requirements and then some,” Biden told reporters. “Having two new NATO members in the north [de Europa] it will enhance the security of our alliance,” he added.

Accession still has to overcome the obstacle of Turkey, where President Recep Tayyip Erdogan He insists on his denial. Erdogan again accused the two Nordic nations, especially Sweden, of being a “focus of terror, home of terror”for allegedly supporting the Kurdistan Workers’ Party (PKK), an armed group considered terrorist.

Turkey’s yes is crucial for the entry of Sweden and Finland into the military alliance, because the decision must be unanimous. Each of its 30 members can veto the entry of other candidates.