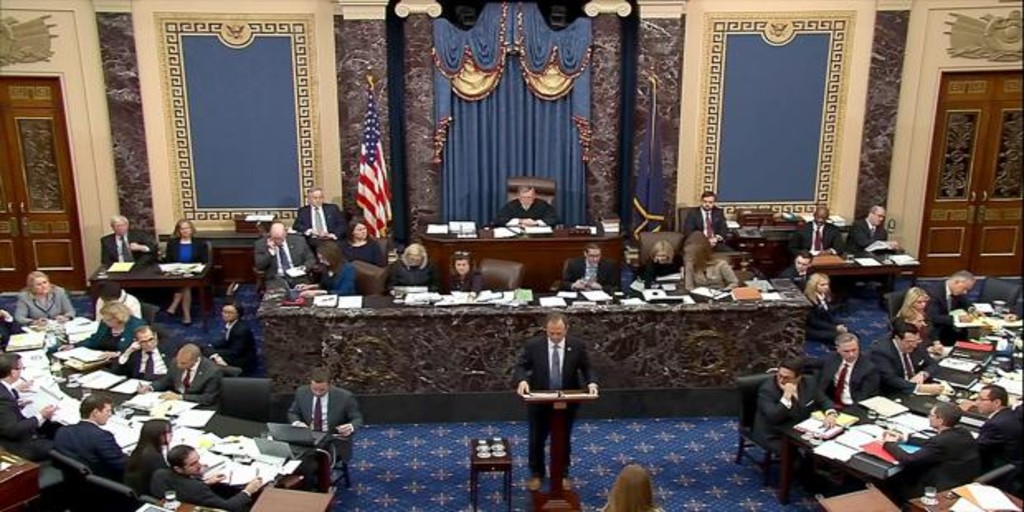 The Senate has finally voted in favor of not calling any witness in the political trial to Donald Trump, and is already preparing to exonerate the president in the third impeachment process of US history. Finally, a sufficient majority in the Republican Party has folded to Trump’s wishes and voted Friday night against lengthening the views with interrogations of witnesses.

Voting has been very tight. Of the 100 senators, 51 have voted against calling witnesses and 49 in favor. Only two Republicans – Mitt Romney and Susan Collins – have joined the Democrats and independents. The accusation, which the Democrats exercise, wanted to call to testify, among others, to John Bolton, the National Security adviser whom Trump fired in September.

Democratic Deputy Adam Schiff, who acts as prosecutor, said before the vote: “According to the defense, the president cannot do anything wrong simply because he is the president. There ends his reasoning: the president is the state. As president he has the divine right to do whatever he wants. May God help us if this strategy succeeds ».

For its part, the defense has defended that it was in the first phase of this process, in the Lower House, when all witnesses should be called. «The Senate is not here to do the investigations that the House did not do. That process did not have the necessary guarantees, and reached conclusions that are not supported, ”said lawyer Patrick Philbin.

The House reproached Trump on December 19, and opened the trial in the Senate. It is now that the senators decide the calendar for the final vote, taking into account that on Monday they are the Iowa caucuses, the first appointment of primaries, and on Tuesday the president gives the State of the Union address in the same Capitol.

The shortest trial
This has been the only impeachment trial in history that has not had witnesses in its final phase in the Senate. Like all previous political trials, it will be a failure. Only Richard Nixon resigned after charges were brought against him, even before they came to the Senate for political trial.

Realizing that this process is doomed to fail, Democratic leader Nancy Pelosi distributed an argument among the deputies of her party in which she denounced that Trump “remains a danger to democracy and national security”, “has put his interests above those of the nation ”and“ must be held accountable ”. Pelosi, who began this impeachment process as president of the House of Representatives, now hopes that it will be the polls that expel Trump. The presidential elections are in November.

The question to which the senators have answered is: “Should any motion to summon witnesses or evidence be considered and subject to debate within the rules of impeachment?”

The Radical Left, Do Nothing Democrats keep chanting “fairness”, when they put on the most unfair Witch Hunt in the history of the U.S. Congress They had 17 Witnesses, we were allowed ZERO, and no lawyers. They didn’t do their job, had no case. The Dems are scamming America!

To call witnesses the Democrats needed 51 votes in the Senate, which they lacked. To convict Trump of charges of abuse of power and obstruction of investigations require 67 votes, unattainable for them. The process, therefore, has already failed. Only a guilty verdict would allow the president to be dismissed.

See Also:  Emmanuel Macron mobilizes once again for the Lebanese

The Democrats, and some loose verse in the Republican Party like Senator Romney, have denounced that such a large trial should have had witnesses. More when Bolton, the former National Security advisor, has written a book, leaked to the press, in which he states that Trump is in fact guilty of the crimes he is accused of: he did press Ukraine, withholding millions of dollars, to investigate the democratic politician Joe Biden, who is presented to the presidential primaries

The feeling of the Republicans was expressed by Senator Lamar Alexander, who doubted the interrogations and finally voted against them. As the president’s defense said, even if those pressures had occurred, and Trump was guilty, those actions would not be serious enough to make him deserving of dismissal.

Read my full statement on my vote regarding additional evidence in the impeachment proceedings here: https://t.co/xmuRicS7U4

According to Senator Alexander in a statement, “it was inappropriate for the president to ask a foreign leader to investigate his political opponent and withhold US aid to encourage that investigation. But the Constitution does not give the Senate the power to remove the president from office and prohibit him from presenting himself this year simply for actions that are inappropriate.

The political trial began in the Senate on January 21. After the turns of the prosecution and defense, the senators spent two days submitted written questions. After rejecting the interrogations, senators must now discuss the rules to close this process, choosing a time for the final vote on the verdict. .