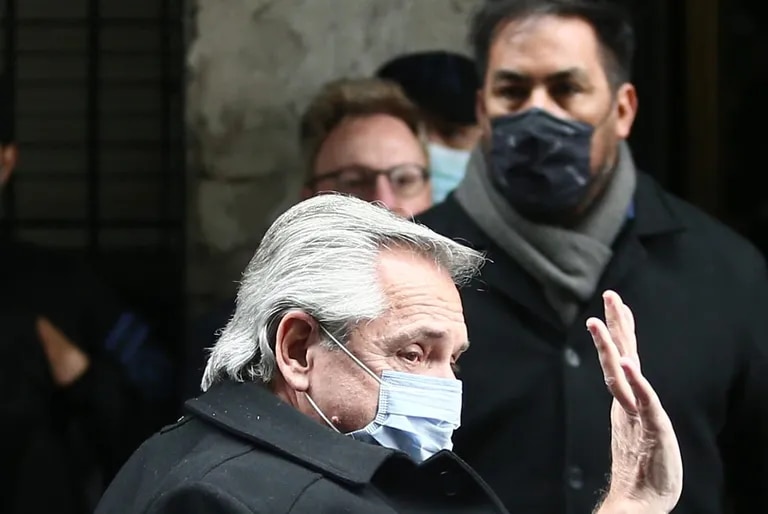 The temporary relief is followed by an almost paralyzing vertigo. Alberto Fernandez broke the symbolic chains that bound him to Cristina Kirchner to discover that what came next was a shock of responsibility. In the enormous shadow of the vice president she found a story, a past of imaginary glories, a collection of enemies and the multipurpose excuse that her entourage used until she was exhausted: “She won’t let him”.

Las last hours They exhibited a lost President in the dome of power who lives in solitude since his emancipation. On Friday morning he seemed afflicted with Kirchnerist nostalgia: he was flagged in the defense of a rise in withholdingsminimized – to the point of denying them – his criticism of Cristina, he said that he is ashamed of the Supreme Court and set as “objective number one” of all his ministers that the salary beats inflation. He so thoroughly described his powerlessness to lower prices that he came close to accusing the government of defrauding its voters.

Fernandez’s latest move should not be confused with the call for a truce. It is rather about how he is digesting the indifference of Peronism to the installation of his re-election project, actively resisted by Cristina and her soldiers. The test balloon he attempted in Europe was followed by a almost offensive silence of governors, mayors and even members of his Cabinet.

The proof that was missing was with the summons to the act that Gerardo Martinez, from the Uocra, organized this Friday. Originally it was nothing more than a sectoral event designed to nurture the leadership of the trade unionist among his own. Fernández wanted to give it a foundational patina. Contrary to all political communication manuals, it was announced that it would be a display of Peronist support for the President without having the most basic guarantee of success.

In the end there was no room for one more absentee. Sergio Unac he was the only governor in the estate of Esteban Echevarría. He convinced Fernández the day before on a visit to San Juan. The Buenos Aires Axel Kicillof he led the void that Kirchnerism created for him. Nor did he bother to decline the invitation. “He who could come, came”was the resigned explanation of the chief of staff, John Manzurwho was in charge of counting the fouls by phone.

turned out a celebration of presidential weaknesscrowned by the pen that Martínez gave him, a man too experienced not to perceive that such a present could be interpreted as an ironic gesture. “Worse if I gave him a compass”, joked a minister who had attended the event after changing his entire agenda, as happened to others, so as not to snub his boss in the face of so much self-inflicted expectation. He only heard a routine speech, without announcements or news.

Under the stage there was talk of the starving call and the mess that was made with the message about the withholdings in a radio interview to which the President gave himself up as he usually does: without a plan of what he wants to communicate and with the vices of a political commentator. It is a custom that has contributed to devaluing his word.

The previous day Martin Guzman He had explained in detail before the Cabinet why an increase in export duties could affect the health of the economic program, which is in need of dollars at this time. With the damage done, Fernández himself asked the minister Julian Dominguez clarify that there would be no increase. It was like ordering him: “Refuse”.

The dissemination of polls weighs heavily on the spirit of the presidential team, such as Polyarchy, which reveal the historical floor of the Government’s popularity. Those who pay them give almost the same. They are numbers to lose elections. They attribute it in part to the effect of the internal fights that they now want to minimize and, of course, to the lack of results in the proclaimed war against inflation.

Fernández choked this week on data that contradicts the optimistic outlook that his ministers, Guzmán and Matías Kulfas, are selling him about the direction of economic activity. Something like “the condemnation to success” that Duhalde spoke of in the years of the Great Crisis. The brake on food consumption, especially meat and dairy, is a strong warning signal. There are economists whose reports circulate in the ruling party, such as Martin Redradowhich already put growth in 2022 at 2%. Few have faith in the 6% or 7% that the President clings to.

The decision to give Guzmán the management of the pricing policy -including the move of Roberto Feletti– obeys more than the decision to empower the minister to assume responsibility. Cristina gave the order to “let it be done” and reserves the right to use the “I warned” resource if things go wrong. Something similar will happen with rates. The fielders in the energy area do not expect to block the resolutions, beyond the fact that Guzmán is still bogged down in the novel of user segmentation.

The indicator that the Government and the Instituto Patria look at obsessively is that of the central bank reserves. Although this last week was positive, the difficulty in accumulating dollars is alarming in a year in which the field has already settled 13,000 million11% more than in the same period last year. What will happen when, at the end of July, the “high season” for agricultural exports is over?

It is Cristina’s great economic amendment, which accuses Guzmán of applying a low-wage plan that is not capable, in return, of collecting foreign currency. Since December 2019, the registered real wage has barely risen (the non-registered wage has plummeted), the GDP is almost the same, while exports increased by 16%. “And yet the country has a problem with dollars?”Mrs. Kirchner usually complains.

Fernández hammers in vain in the context of the pandemic and the war. The company does not buy pretexts after two years of management. It already happened to Mauricio Macri when he talked about the drought and Donald Trump’s trade dispute with the Chinese to explain the 2018 crisis that sealed his fate.

Winter is frightening because, along with a lower liquidation of exports, the bill for imported gas ships will begin to rise, essential to maintain industrial production.

Fernández and Guzmán have the challenge of accommodating the variables to overcome a very complicated period. The rise in rates can add fuel to inflation and a drought of dollars threatens exchange rate peace in the short term. The minister begs the President to limit political noise so as not to further affect economic expectations.

Cristina is collaborating. Never was her public image at more squalid levels. As much as she rails against her invention of 2019, she knows she can’t abuse anti-government gloating. The shots at Alberto also wound her and also reveal her own impotence: she exhibits herself as a commentator incapable of imposing her will. The next honoris causa will have to wait.

His energy is focused on the political structure of the province of Buenos Aires, the basis of his electoral power on the Peronist national board.

“Alberto understood that his future is tied to lowering inflation. Guzmán cannot be fired because it would be an absolute sign of weakness in the face of Cristina’s harassment. He is left to empower him. It’s ‘overwintering’ again; politics comes later”, explains a Peronist leader who enters the Casa Rosada every day. If there will be adjustments to the equipment, they will be surgical. The polls -never formal offers- to add figures to the cabinet fail daily. No one summons from 19% popularity.

To recreate confidence and power, Fernández will have to find more than just the excuses with which he ends up sending the wrong messages to economic actors. On Friday, for example, his explanation of the crazy prices of Argentine clothes was disconcerting: “How is this story? I protect them, I don’t let productions from China enter and prices won’t stop rising here.” He is like someone who jumps out of a window and when he hits himself he gets angry with the ground.

The agreement with the IMF marked the break with Cristina. The agency gave Fernández a tailored suit, by approving a program based on postponement. Without transformative reforms and with the promise of being lax in reviews. But the goals that must be met force a macroeconomic design that is far removed from the promises of high wages and low inflation that the official discourse proclaims.

That is the trap that Cristina knew how to see when she decided to take off as a militant. “They make us argue with each other. Let no one confuse us. We agree on what and we debate on how”, is the new rationalization of Fernández about the ruling crack. The fault is someone else’s.

She doesn’t offer him the consolation of nodding. Her ultimate goal is for Fernández to surrender to the inability to accommodate the ship and to end up giving the power struggles that she demands: review the agreement with the IMF, confront the countryside for the increase in their income and not demonize the issue. as a redistributive instrument.

Opposite case, that her fans do not identify her with failure. He will have treasured the gesture that the President had on Friday when he posed smiling with the pen that was given to him on behalf of the construction workers.