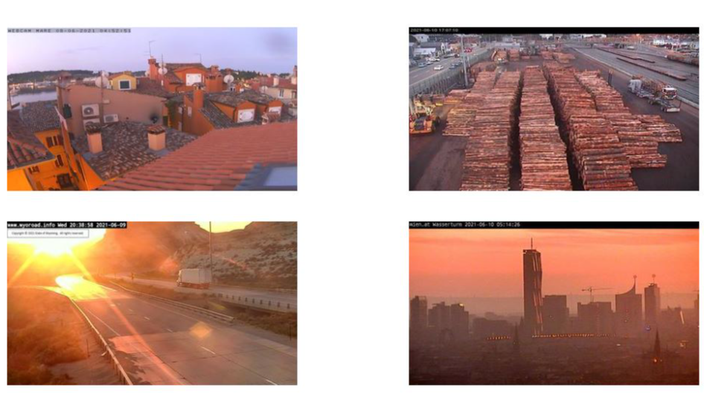 The Encyclopedia of Now, by the Swiss photographer, provides access to half a million images collected and sorted using artificial intelligence.

Smile, you’re being filmed ! The work of Swiss photographer Kurt Caviezel disturbs as much as it captivates. But the content of his latest project is none the less frightening. Thanks to 12,000 cameras, private and public, installed around the world, the fifty-six-year-old artist describes the world, live, via his website The Encyclopedia of Now, implemented with the assistance of the University of Zurich. Asked by his compatriots from the newspaper Time , he explains the objective of his initiative.

“This project, which uses artificial intelligence, makes it possible to recover half a million images per day!, enthuses the photographer who has used webcams in his work for twenty years. 12,000 webcams are connected on average on the website. But some are disappearing and new ones are constantly appearing», He backs up. Every nine seconds, nine webcams present a different angle of the world, before the site refreshes and new images replace them.

These cameras are located everywhere, in Korea, Russia, Europe and all the way to the North Pole. This makes it possible to understand the very diverse approaches to the notion of the private sphere. Asians, for example, offer much more access to their privacy.

In Caviezel’s universe, reality has accelerated. The only way to catch your breath is to click on one of the cameras. The lucky winner will then present her recordings of the last twenty-four hours. “Each downloaded image is analyzed and sorted by artificial intelligence according to the sections that we have imagined: colors, animals, means of transport, etc. ”, specifies the artist, who continues: “Everything takes place live. Then the images are archived for twenty-four hours before being destroyed. It takes a huge amount of storage and power. Fortunately, sponsors will allow us to have our own servers soon. ”

Fascinating, disgusting, voyeuristic? This instantaneity usually specific to social networks is claimed by the artist, who considers his project as “A sort of Netflix of reality, of live streaming”. “I find it very exciting. Where do these 12,000 cameras come from? It’s a mix of public and private cameras accessible to everyone. They are located everywhere, in Korea, Russia, Europe and up to the North Pole. This makes it possible to understand the very diverse approaches to the notion of the private sphere. Asians, for example, offer much more access to their privacy. ”

Sailing from page to page, from image to image, the “work” is also an invitation to travel, to discover the globe. Kurt Caviezel has one preference among the countless video proposals: a distributor in Iran. “We see people parading in front of an ATM, the women are entirely covered with a veil. It’s a strange sight for me who have never been to this country. ” A fresco of ugliness, sometimes, as when one comes across a “Factory in India or Pakistan, in which the workers work, eat, sleep on cardboard boxes; they never leave the premises ”.

“It’s less aesthetic, but that’s life, notes the artist, stoic. An archive of the present, an encyclopedia of reality. And exploring the site, stopping on a camera and going back over the last few hours becomes very addicting. ”