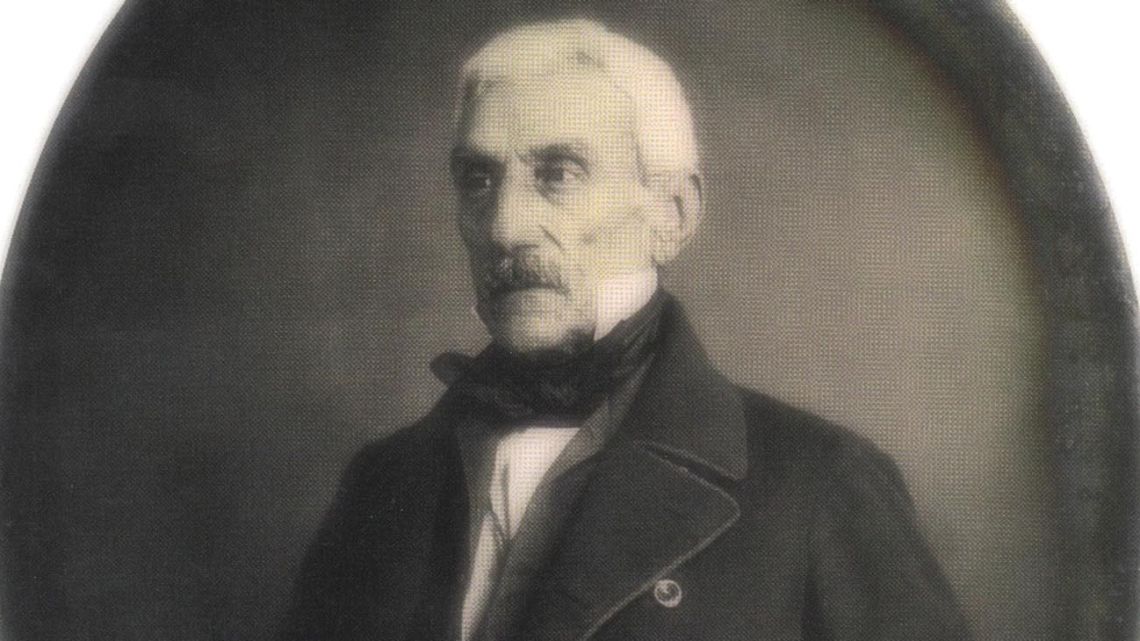 On January 23, 1844, accompanied by Mariano Balcarce, his faithful son-in-law, San Martín appeared at Francois Huillier’s notary’s office and wrote his will, consistent with his way of being, simple and austere.

In just two pages of clear and neat handwriting and in only eight clauses it said that: “In the name of Almighty God whom I acknowledge as the maker of the Universe. I say José de San Martín, Generalissimo of the Republic of Peru and Founder of its Freedom, Captain General of the Republic of Chile and Brigadier General of the Argentine Confederation, that given the poor state of my health, I hereby declare the following: ”

“First, I leave my only daughter, Mercedes de San Martín, currently married to Mariano Balcarce, as my absolute heir to my property, having and for having”.

It refers to Mercedes Tomasa born in Mendoza on August 24, 1816, daughter of his marriage to Remedios de Escalada and who had married in Paris in 1832.

“Second. It is my express will that my daughter provide my sister Maria Elena with a pension of one thousand francs a year, and on her death, continue to pay her daughter Petronila, one of 250 until her death, without in order to ensure this gift that I make to my sister and niece, another mortgage is necessary than the confidence that assists me that my daughter and her heirs will religiously fulfill this my will”.

María Elena de San Martín y Matorras, the only daughter of the marriage of Juan and Gregoria, was born in Calera de las Vacas in 1771 and married in 1802 in Madrid with Rafael González and Álvarez de Menchaca, parents of an only daughter – Petronila – who died single in 1880 in San Sebastián, where María Elena had also died in 1853.

As the historian Martín Blanco expresses “It is remarkable how San Martín clearly expresses the trust he had towards his daughter and son-in-law, not to constitute a mortgage for the fulfillment of this clause, a trust that both honored until the end of their days.”

“Third: the saber that has accompanied me throughout the South American War of Independence will be delivered to the General of the Argentine Republic, Don Juan Manuel de Rosas, as proof of the satisfaction I have had as an Argentine at see the firmness with which it has upheld the honor of the Republic against the unjust pretensions of Foreigners who seek to humiliate it.”

Undoubtedly, this provision was the most controversial of those written by the Liberator and was a reason for countless comments and subsequent speculation once the will was known after his death and the news arrived in Buenos Aires. Such was the controversy that rose among the opponents of Rosas very harsh criticism questioning the authenticity of the document and the mental capacity of San Martin to write it.

Although San Martín and Rosas exchanged correspondence, there is nothing in it that infers an approval or support for the internal policy of the Restorer on the part of the Great Captain. San Martín prioritized in his mind the fight against foreign aggression and not party spirit or personalism. He understood that before the blockade carried out since 1838 by the French squadron, Rosas’s attitude had been firm to uphold the national honor.

It is said that he bequeathed his saber for the battle of Vuelta de Obligado (20.Nov.1845); It is enough to see the date of the will to realize that it was not so.

This mandate was fulfilled – it is assumed – during Rosas’s exile in England, over the years it was donated in 1897 “to the Argentine Nation” by the Terrero Rosas family and today it is exhibited in the National Historical Museum.

“Bedroom. I forbid that any kind of Funeral be made to me, and from the place where I died, I will be taken directly to the cemetery without any accompaniment, but I would wish that my heart be deposited in the one in Buenos Aires”.

True to his style, the General, who despised luxury and pomp, forbade his funeral, which was carried out just as Félix Frías narrated: “The hearse received the coffin and was accompanied in its silent transit by a modest procession, humble and typical of the high modesty so worthy companion of the moral qualities of that eminent man.”

In turn, Balcarce informed Buenos Aires that “His mortal remains were taken without any pomp to the vault of the Boulogne-sur-Mer cathedral, where they will remain provisionally, since he has ordered that they be transferred to Buenos Aires, so that they rest in the bosom of his beloved homeland to whose service he consecrated His whole life.”

This wish took 30 years to come true in a long journey of ups and downs that delayed its fulfillment.

“Fifth. I declare that I do not owe nor have I ever owed anything to anyone.”

Graphic statement of the honesty and unfailing conduct of General San Martín in matters of money, proven both in his public and private life, by all accounts austere.

“Sixth. Although it is true that all my desires have had no other object than the good of my beloved daughter, I must confess that her honest conduct, and the constant affection and care that she has always shown me, have rewarded with usury, all my care making my happy old age I beg you to continue with the same care and contraction the education of your daughters (whom I embrace with all my heart) if you in turn want to have the same happy luck that I have had; I also entrust her husband, whose honesty and good manhood have not denied the opinion I had formed of him, which guarantees me that he will continue to make my daughter and granddaughters happy”.

Emotion and pride in this declaration of love to his family, thanking them for a happy old age, opening his heart. Love that was reciprocated and honored by them, who referred to the General as “Tatita” Y “Grandpa” as they affectionately called it even decades later.

200 years ago, General San Martín arrived in Lima, the City of Kings

“Seventh. Any other Will or Provision prior to the present one is null and void.

Two previous ones are known: the one carried out in Mendoza on October 23, 1818 before the notary public Cristóbal Barcala, leaving his wife Remedios as universal heirs, as administrator of his assets without the need for executors or guardians, and his daughter.

A second disposition in Pisco (Peru) on September 29, 1820 aboard the schooner Moctezuma with orders regarding the destination of his luggage and belongings on board.

“Additional article. It is my will that the Standard that the brave Spaniard Don Francisco Pizarro waved in the Conquest of Peru be returned to this Republic (despite being my property) provided that its Governments have made the rewards and honors with which its first Congress honored me. ”.

Here San Martín refers to the gift that the Peruvian Government gave him and the debts that he himself had in the payment of the life pension of 9,000 pesos per year, which was not fulfilled in a timely manner by the State. Debt settled in 1861 with the $164,000 that Mercedes received and with the delivery of the banner that returned to Lima until it disappeared in 1865 during the revolts of the civil war known as the Restoring Revolution.

This original document is today in the custody of the Sanmartinian National Institute, whose repatriation efforts were initiated by its founder José Pacífico Otero and concluded in 1960 during the government of Arturo Frondizi.

Thus, the Liberator had his last will, but beyond these legal clauses, he left us something much more valuable: a transgenerational legacy through his life, writings, testimonies and correspondence that constitute a decalogue of honor and virtues, forming an invaluable civic and political testament of one of our founding fathers and American leader, as defined by the Mendoza essayist Juan Marcelo Calabria.

Handball: hidden cameras in the locker room of a women’s team